Proof Eisenhower dollars were minted from 1971 through 1978, which is the duration of the series. While all regular-issue Eisenhower dollars were made with copper-nickel clad, in 1971 and 1972, all proofs were struck as 40% silver numismatic specimens that were sold individually in brown-colored boxes. In 1973, the United States Mint began packaging copper-nickel versions of the coin in standard annual proof sets, though continued offering 40% silver proofs on an individual basis.

In 1975 and 1976, the United States Mint honored the nation?s 200th birthday with special bicentennial Eisenhower dollars featuring a dual-dated 1776-1976 feature on the obverse and a special reverse design showing the Liberty Bell superimposed on the moon. There are two basic varieties known among 1776-1976 copper-nickel clad proofs. These include the Variety I featuring a bold, san-serif font on the reverse inscriptions and the Variety II, which features finer inscriptions with serifs. All 40% silver proof are Variety I specimens.

Following the Bicentennial program, the coin?s regular reverse design featuring the Apollo 11 insignia returned in 1977, though the 40% silver proofs did not. While proof Eisenhower dollars are extremely common, pre-Bicentennial deep cameo proofs are not and generally sell for multiples of standard proof Ike dollars. 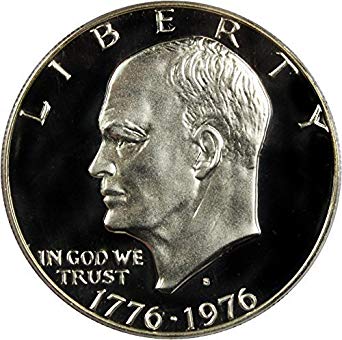