Roosevelt dimes were first struck in 1946 and designed by John R. Sinnock. Debuting only months after Franklin Delano Roosevelt?s passing in 1945, the Roosevelt dime was deemed a fitting tribute to the man who fought a disease diagnosed as polio and helped established the March of Dimes organization. While Roosevelt dimes are generally regarded as a series chock full of common coins, there are several challenging surprises in store for those who focus their attention on this long-running series.

The 1949, 1949-D, 1949-S, and 1950-S are surprisingly tough coins in the mid-range Mint State grades. Meanwhile, the 1963 doubled die reverse and 1964-D doubled die reverse varieties are two of the more difficult pieces to acquire. One of the most popular Roosevelt dime varieties is the 1982 no-P, which can be found in circulation and even with wear is worth a sizeable premium over face value. The 1982 no-mintmark Roosevelt dime is especially valuable in Mint States grades. The 1996-W Roosevelt dime was offered only in 1996 uncirculated sets and is one of the scarcer late-date business strikes of the series.

Regardless of date, Full Bands (or ?FB?) Roosevelt dimes, which show complete horizontal lines on the bands across the torch on the reverse, are valued by enthusiasts. Both the 90% silver (1946-1964) and copper-nickel (1965-present) FB Roosevelt dimes are scarce and command substantial premiums over similarly graded non-FB specimens. 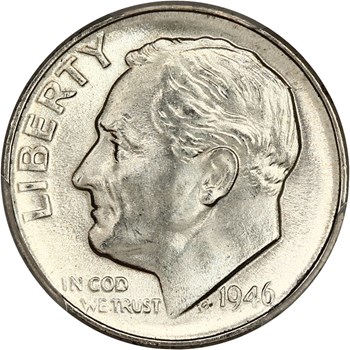 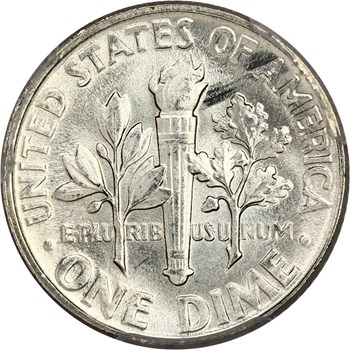