How much are my Legal Tender - Large worth?

Legal tender notes, also called "United States notes," were first issued on March 10, 1862 and were produced in denominations ranging from $5 to $1,000. These notes were released in five different issues, with the first issue bearing two obligations � one on the obverse, and one of two types on the reverse.

Second Issue and Third Issue legal tender issues, printed on August 1, 1862 and March 10, 1863, respectively, contain the second obligation of the First Issue. Second Issue printings were for the $1 and $2 denominations, while the Third Issue covers denominations ranging from $5 to $1,000. 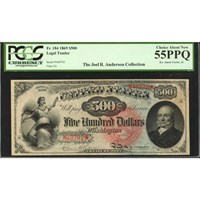