Important Note Regarding Pricing of Large Cents by Sheldon Variety:

Dr. William H. Sheldon's seminal work titled "Penny Whimsey," last edition 1976, is the definitive reference for serious collectors of this coinage. Among other things Sheldon has been credited with the ubiquitous 0-70 grading scale used in numismatics. Until now, pricing has never been effectively published for this specialized area. CDN Publishing is proud to work with noted experts in early copper including Terry Denman and Christopher McCawley, a collector and dealer, respectively, with many decades of experience.

In working with Denman and McCawley, we determined that it is not necessarily practical to match up dated coins from the large cent series by the stringent standards placed by specialists (i.e. EAC members) with the market-based pricing we use for large cents in our other pricing grids. Therefore, we caution users of this price guide to compare values published in both places to best determine market values for these early coppers.

Keep in mind that all early American copper issues (colonials, half cents and large cents) are an especially challenging area to determine and fix accurate market values. The issues listed in CDN publications represent the wholesale prices of coins that are problem free and strictly graded, especially as they compare to other examples of the same issue. Any number of factors can influence (decrease or increase) the value of early large cents, including mint-made problems (planchet flaws, poor strikes, etc.) and post-mint problems (corrosion, improper cleaning, environmental damage, and more). The prices listed here are intended to serve as a guideline and starting point for discussion and negotiations of valuation, but the CDN editors strongly encourage buyers to seek expert advice in this field before purchasing coins of high value. 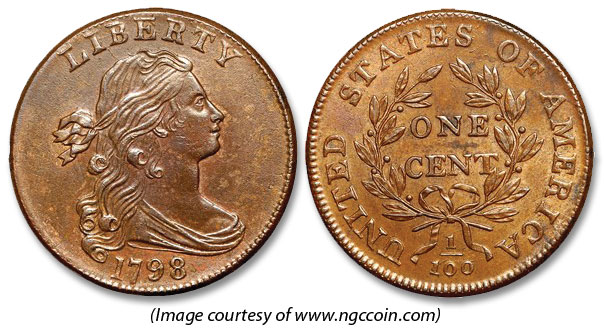