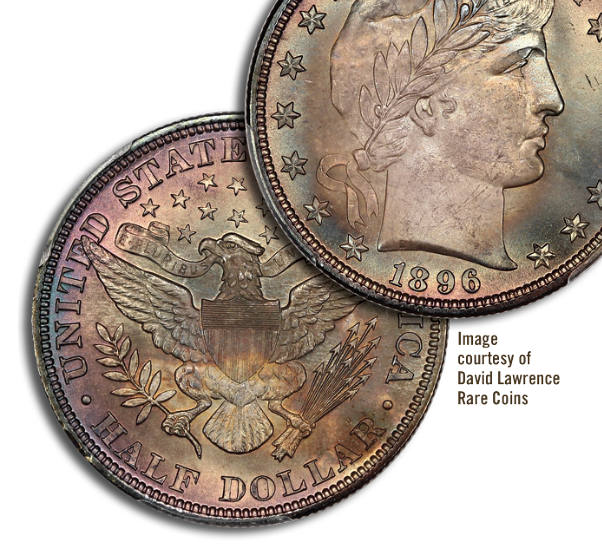 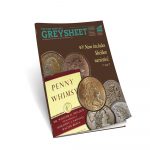 The September 2019 edition of The Monthly Greysheet

This article appeared in print in the September 2019 issue of The Monthly Greysheet. Click here for more information on this publication.

This is the second installment of a series on collecting Barber coins. The first part was about assembling a set of Barber half dollars that grade from XF40 to AU55. The current topic is MS64 to MS66 grade halves, choice to gem pieces, but not the highest certified of respective dates.

A theme here is that MS64 to MS66 grade classic U.S. coins are often better values for collectors than coins that are among the highest certified by PCGS or NGC for individual dates. When I was a kid collecting coins, a date referred to the combination of the year and the location of the mint that produced the respective coin. For example, in regard to the year 1906, there are four dates of Barber half dollars: 1906 (Philadelphia), 1906-Denver, 1906 New Orleans and 1906 San Francisco.

Although few Barber halves in the whole series grade MS67 or higher, auctions, media attention, registry sets, and conversations among collectors, have resulted in so much attention being given to superb gems that choice to gem grade Barber halves have been overshadowed. It is important to think about the aesthetic qualities and market levels of MS64 to MS65 grade Barber halves. After all, the number of collectors who can afford coins valued in the $1,000 to $10,000 range is much greater than the number who can afford coins in the $10,000 to $100,000 range.

Additionally, there are better dates that are not semi-keys but are worth considerably more than the least scarce dates in the series. Although the least scarce dates are often called ‘common dates,’ no Barber half is really common in MS64 and higher grades. Survivors of most dates in the series, however, are common in the AG03 to Fine-12 grade range.

In grades below MS66, a complete set of Barber halves is a very realistic objective, though this objective is not often mentioned in the media. Over the last fifteen years, there has been a tremendous amount of media coverage of MS67 and MS68 grade Barber half dollars, especially top-ranked coins in fabulous sets.

Many records were set and the room was bustling with excitement when Dr. Duckor’s set was auctioned by Heritage in August 2010 at an ANA Convention in Boston. Maniacal bidding that night was very entertaining.

Curiously, I am responsible for much of the media coverage in dozens of articles in three publications. I focused upon or discussed superb gems in the many amazing sets of Barber halves that have been publicly sold over the last fifteen years. For superb Barber halves, this era was incredible, almost unbelievable.

John Hugon’s set was auctioned in January 2005, Dale Friend’s set in January 2009, Dr. Duckor’s set in August 2010, Gene Gardner’s set in 2014 and 2015, plus the “Greensboro” set in August and October 2015. Unfortunately, I missed the auction of Dr. Shireman’s set in January 2016, though I wrote a detailed preview of it after viewing his coins. The private sale in 2018 of a superb set of Barber halves to Dell Loy Hansen by the connoisseur who calls himself “Perfection,” and Hansen’s later acquisitions, continued the mania for finest known Barber halves. Each of the just mentioned sets is among the all-time best sets of business strike Barber half dollars ever formed, partly because many of the same MS67 to MS68 grade coins were included in more than one of these sets.

In the grand scheme of ‘mint state’ classic U.S. coins, the costs of collecting Barber halves are not large. Prices realized in January 2009 in the auction of Dale’s set illustrate the point that the long-term mania for superb Barber halves has deflected attention from the reality that MS64 and MS65 grade Barber halves are modestly priced in the context of scarce, pre-1917 U.S. coins.

Of course, population data includes multiple counts of some of the same coins. A pertinent point is that there are likely to be several appealing MS64 or MS65 grade 1906-D halves available over the next few years, for modest prices.

Yes, there are collectors who figure that the attractiveness, technical quality and condition rarity of “MS66+” to “MS68” grade Barber half dollars result in these being worth the prices that have been paid for them over the past fifteen years. The purpose here is not to criticize those coins, many of which excite me. The purpose here is to draw attention to relative prices and to raise the point that MS64 to MS66 grade Barber halves may be good values for already interested or potentially enthusiastic collectors in the current market environment.

While it is true that quite a few certified MS67 or MS68 Barber half dollars are truly beautiful, there are some certified MS65 and MS66 coins that are very appealing, too. A coin may have a few hairlines or small marks on Miss Liberty’s face, yet be very attractive. Collectors may enjoy searching for very attractive MS64 to MS65 grade Barber halves.

A set of MS64 to MS65 grade Barber halves, perhaps with a few MS66 grade coins, is a very realistic objective. The least scarce dates are just too easy to find in MS64 grade.

For the vast majority of dates, there are more than a dozen different coins that are certified as grading MS65 or MS65+. Interestingly, 1913, 1914 and 1915 Philadelphia Mint halves are semi-keys in Good-04 to VG10 grades and are difficult to find in MS66 grade. These are nonetheless available in MS64 to MS65 grades.

Invariably, collectors will obtain coins that have problems or not so apparent imperfections. It does not make sense to obsess about every single coin. For the few coins that must cost more than $5,000 each, it is a good a idea to consult an expert to discuss the positive and negative aspects of individual coins that are being considered.

Some of the least scarce dates account for a substantial percentage of the mint state population totals for the whole series. MS64 or MS64 grade representatives of several of the better dates appear infrequently, surprisingly so. It is a challenge to complete the set, and the process of building a collection of MS64 to MS65 grade Barber halves may be very enjoyable.