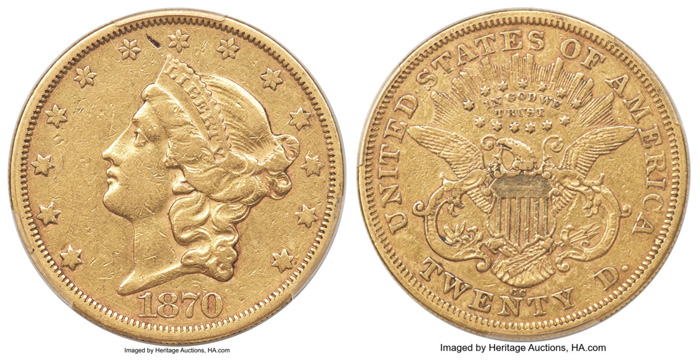 DALLAS, Texas (October 11, 2021) – More than 5,100 global bidders engaged in eager bidding to drive the total result for the Long Beach Expo US Coins Signature® Auction and US Currency Signature® Auction to $15,787,609 in combined sales.

“The demand for rare and desirable coins and currency continues to grow, which was reflected in the results for both coins and currency in this auction,” Heritage Auctions President Greg Rohan said. “People looking for high-end coins and notes came away from this event with exceptional items to bolster their collections.”

U.S. Coins
The 1870-CC double eagle in this auction is a new discovery, an heirloom passed down family lines for several generations. It was completely unknown to the collecting world until recently. Only about 60 survivors from the small 1870 mintage of just 3,789 pieces are known in all grades.

From the first coinage of $50 gold pieces for the Panama-Pacific International Exposition, a 1915-S $50 Panama-Pacific 50 Dollar Round MS65 PCGS rode 68 bids to $180,000. This is a round version of the coin that enjoyed a celebrated release in octagonal form, and the attention showered upon the eight-sided version left its round counterparts largely overlooked; as a result, the round version is the rarer of the variants, and more valuable in high grade. 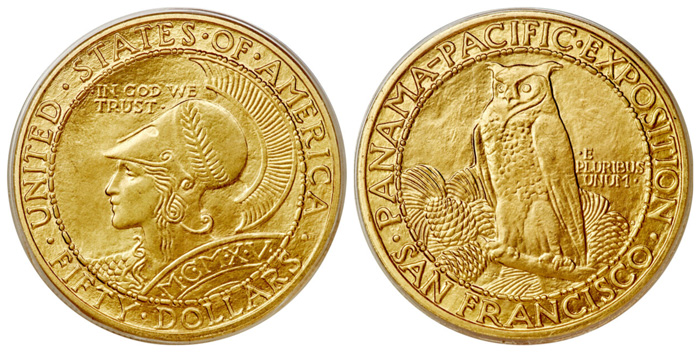 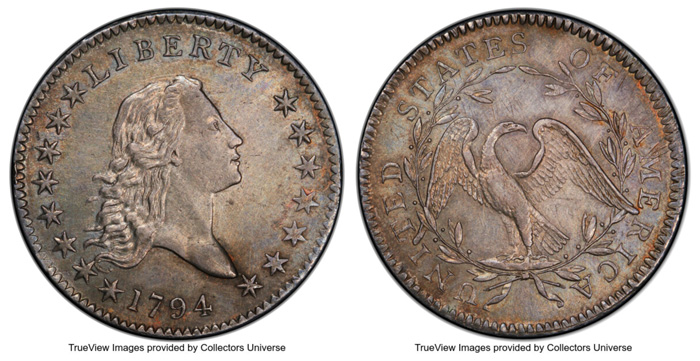 A 1932 $20 MS65 PCGS , one of the first late-date Saint-Gaudens Double Eagles to reach auction with regularity, drew more than 50 bids before it reached its final price of $156,000. It is believed that all but 250 1932 double eagles reportedly struck were kept in the Philadelphia Mint vaults before being melted under President Franklin D. Roosevelt's Gold Recall order of 1933. Another 75 were destroyed in assay tests, and of the 175 that remained available to the public, 113 were sold privately by the Mint Cashier or the Treasurer to specific buyers, including a group of 50 pieces to Spencer S. Marsh of Newark, New Jersey. The offered example is believed to be one of about 95 extant in all grades. 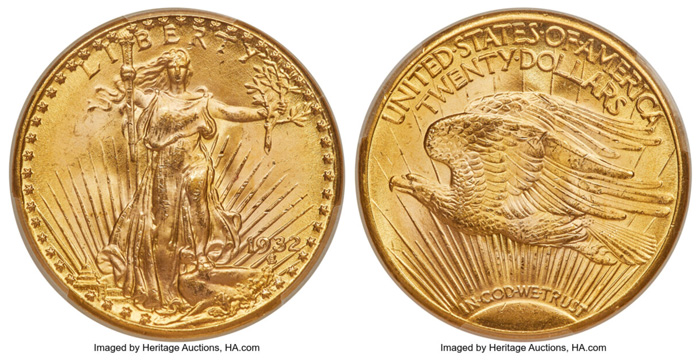 For nearly two centuries, numismatic tradition has had it that 1776 Continental dollars were struck at the behest of the Continental Congress as prototypes for an American dollar coin. The theory was the subject of debate, but an article by in the January 2018 issue of The Numismatist presented strong, if not irrefutable evidence that the Continental dollars were actually struck in Europe circa 1783, not in Revolutionary War-era America. A near-Gem example, 1776 $1 Continental Dollar, CURRENCY, Pewter, EG FECIT, MS64 PCGS. Newman 3-D, W-8460, R.4 , drew a winning bid of $150,000. 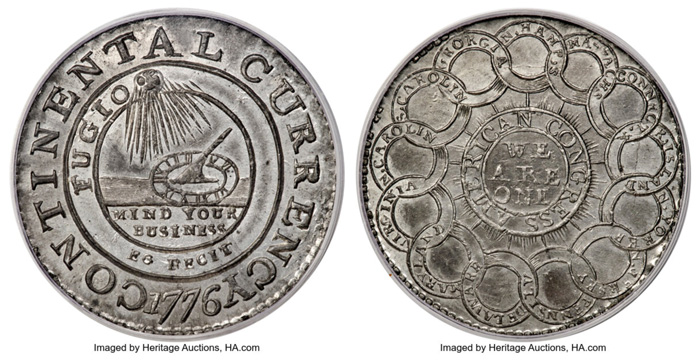 A 1926 $1 MS67 PCGS from The James E. Blake Collection reached $120,000, a record for the most ever paid for a 1926 Peace Dollar. Production of this coin dipped to just 1.9 million pieces in 1926, and few survivors can match the quality and eye appeal of this Superb Gem example. 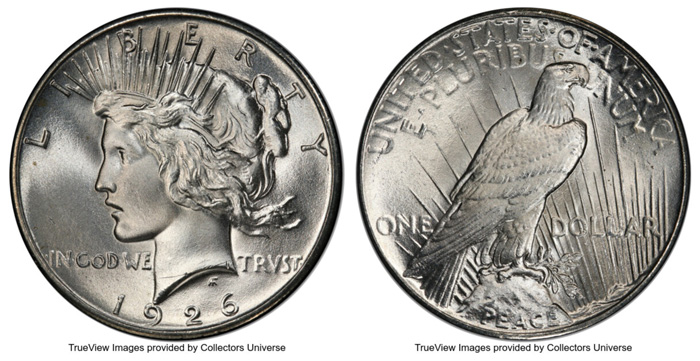 U.S. Currency
“The robust markets for collectibles are bringing out some great items, pieces we might only see once in a decade or less,” Heritage Auctions Vice President Dustin Johnston said. “The market is responding in kind. We set many new records last week as no one knows when those opportunities will come around again. Astute collectors need to be on their toes right now; this market is moving fast.”

The Fr. 2231-G $10,000 1934 Federal Reserve Note. PMG About Uncirculated 50 is a strong example for the grade among notes of this denomination,which have seen steadily rising prices in the last couple of years. The result exceeds what would be the note’s buying power in the current economy: $10,000 in 1934 equates to roughly 200,000 today.

A high-grade Fr. 2221-E $5,000 1934 Federal Reserve Note. PMG Choice Uncirculated 63 more than doubled its pre-auction estimate when it sold for $204,000. This rare and popular $5,000 Richmond Fed is quite possibly a high denomination replacement note. This offering bears a blue-green seal which is not the correct color for regular issue $5,000 and $10,000 FRNs, which should feature a vivid light green color; replacement notes were often printed at a different time than the regular production runs, and in this case would have required hand setting the serial numbers.

A Fr. 1218f $1,000 1882 Gold Certificate PMG Very Fine 25 , from the Yuri Solovey High Denomination Collection, brought a winning bid of $192,000. Series 1882 $1,000 Gold Certificates are listed as eight different significant numbers in Paper Money of the United States by Ira and Arthur Friedberg, with each featuring different signature combinations as the offices of Register of the Treasury and Treasurer of the United States turned over. Just 96,000 examples were printed in total, and the high face value, coupled with the Gold Reserve Act of 1934 under Roosevelt, resulted in massive redemption rates. Just 11 examples are listed in the census by serial number, including one piece which is off the market permanently in the holdings of the Federal Reserve Bank of San Francisco.

A Fr. 2220-F $5,000 1928 Federal Reserve Note. PMG Choice Very Fine 35 , from a series in which notes were printed for just nine of the 12 Federal Reserve Banks, climbed to $150,000. Also from the Yuri Solovey High Denomination Collection, this Atlanta example is one of only about 20 survivors known from all districts combined. The small total is a result of miniscule print runs compared to most 20th century printing totals, with just 1,440 notes printed and released through the Atlanta District.

Other top notes in the auction include, but are not limited to: