The $810,000 coin joins 17 others that brought six-figure results in the Long Beach Expo/Summer FUN US Coins Signature® Auction. 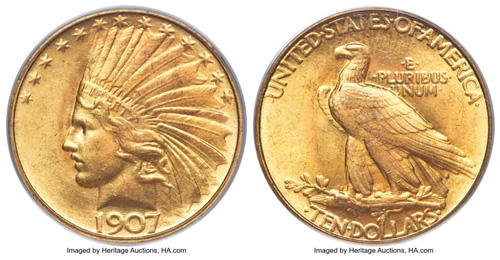 The auction was a virtual sellout by any metric, generating sell-through rates of better than 99.9% both by value and by lots sold for the event that drew 3,686 global bidders in pursuit of 1,921 lots.

The top lot, from The Cody Brady Collection Part IV, is exceptionally rare. The magnificent specimen is one of just 13 graded 66 (two of which are 66+), and there are but four carrying higher grades.

“This is a beautiful and rare coin, scarcer than all issues in the Indian eagle series except the 1933, and it is prized by pattern collectors and series specialists alike,” says Mark Van Winkle, Chief Cataloger at Heritage Auctions. “The 1907 Rolled Rim Ten is one of a surviving population estimated by PCGS CoinFacts of just 40-42 pieces, but of those, most fall in the MS63-MS65 range. Two Rolled Rim examples are included in the National Numismatic Collection at the Smithsonian Institution, and two more are in the collection of the American Numismatic Society.”

The Rolled Rim Ten got top billing, but the event boasted strong results across the board, with 18 lots bringing six-figure results, including two – a 1943 Cent Struck on a Bronze Planchet AU50 PCGS and a 1907 Wire Rim Ten Dollar MS67 PCGS – that each drew a winning bid of $336,000.

The 1943 Lincoln cent has been called the most famous and sought-after error coin of all time. Hundreds of millions were struck each year, but when copper was needed for the World War II war effort for ammunition shell casings, 1943 cents were struck in zinc-coated steel. This previously unknown example was among a few bronze planchets that stuck in the tote bins in late 1942, only to get dislodged and fed into the presses, emerging in 1943 in a bin of zinc-coated steel cents. Demand grew, and not just because of the mere rarity. Rumors – which ultimately proved to be false – surfaced nationwide in the late 1940s that Henry Ford would give a new car to anyone who found a 1943 “copper” cent. The fact that Ford made no such claim was irrelevant, because the perceived promise of a free car sent interest soaring.

Like the Rolled Rim Ten at the top of the sale, the Wire Rim Ten also is from The Cody Brady Collection Part IV. Augustus Saint-Gaudens’ first design for the 1907 Indian eagle featured a Wire Rim (rather than the traditional border) around the circumference of the coin in a design that was much admired by President Theodore Roosevelt. Just 500 specimens were struck, and an additional 42 examples were produced later. Of those 542 coins, 70 were later melted, leaving a net production total of 472 pieces. But the Wire Rim made it difficult to stack the coins for counting purposes, and it was feared that the rim would wear down quickly, causing the coins to be underweight. Chief Engraver Charles Barber modified the design to include a more practical Rolled Rim in September and the Wire Rim design was quickly abandoned.

An important and historic rarity from the Allan H. Goldman Collection, an 1854-S Liberty Quarter Eagle VF25 NGC sold for $288,000. It is one of only 246 struck, making it one of the rarest gold coins ever issued — so rare that PCGS CoinFacts estimates that just 11 or 12 remain in any grade, and one of those is in the National Numismatic Collection at the Smithsonian, and never will end up in a private collection. 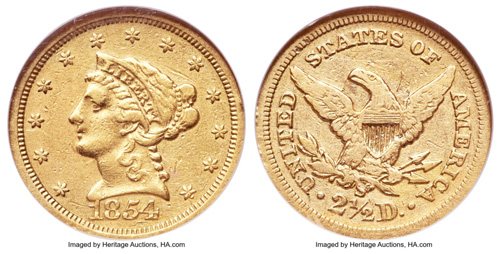 Another beauty from the Cody Brady Collection Part IV, a 1930-S Eagle MS66 PCGS. CAC drew a winning bid of $264,000. Only one example, from the Duckor and O'Neal collections, has been graded finer (MS67) by PCGS. That the Indian Head ten dollar gold piece claimed one of the lowest mintages in the series — just 96,000 were struck — would be ample reason for the strong collector demand. But what makes this late-date key prized among serious collectors is its status as a melt rarity — it is estimated that as many as 95,000 were melted following the Gold Recall of 1933. It is believed that only 150-200 1930-S eagles survive today in all grades, and of those, all but about 10 are in Mint State.

Also from the Allan H. Goldman Collection, an exceptional 1841 Quarter Eagle PR50 NGC. JD-1, High R.6, one of the rarest issues of all U.S. coins, closed at $228,000. Mint records show no 1841 P-mint quarter eagles were produced as proof or circulation strikes, but “The Little Princess,” as it is known, does in fact exist. PCGS recognizes both proof and circulation strikes, while NGC only acknowledges 1841 quarter eagles as proofs. Heritage Auctions has confirmed just 16 examples, including one that was reported stolen many years ago and has not been seen since. Three others reside in institutional collections, unavailable for public or private sale.

Complete results can be found at HA.com/1347.