There are at least two varieties in the Lincoln wheat cent sub-series that countless penny enthusiasts vie for: one is the 1955 doubled die cent and the other is the so-called 1922 “Plain” No-D from the Denver Mint. It’s a fascinating die variety with curious origins. For many years it fooled some collectors into thinking that Philadelphia had actually minted Lincoln “pennies” in 1922. 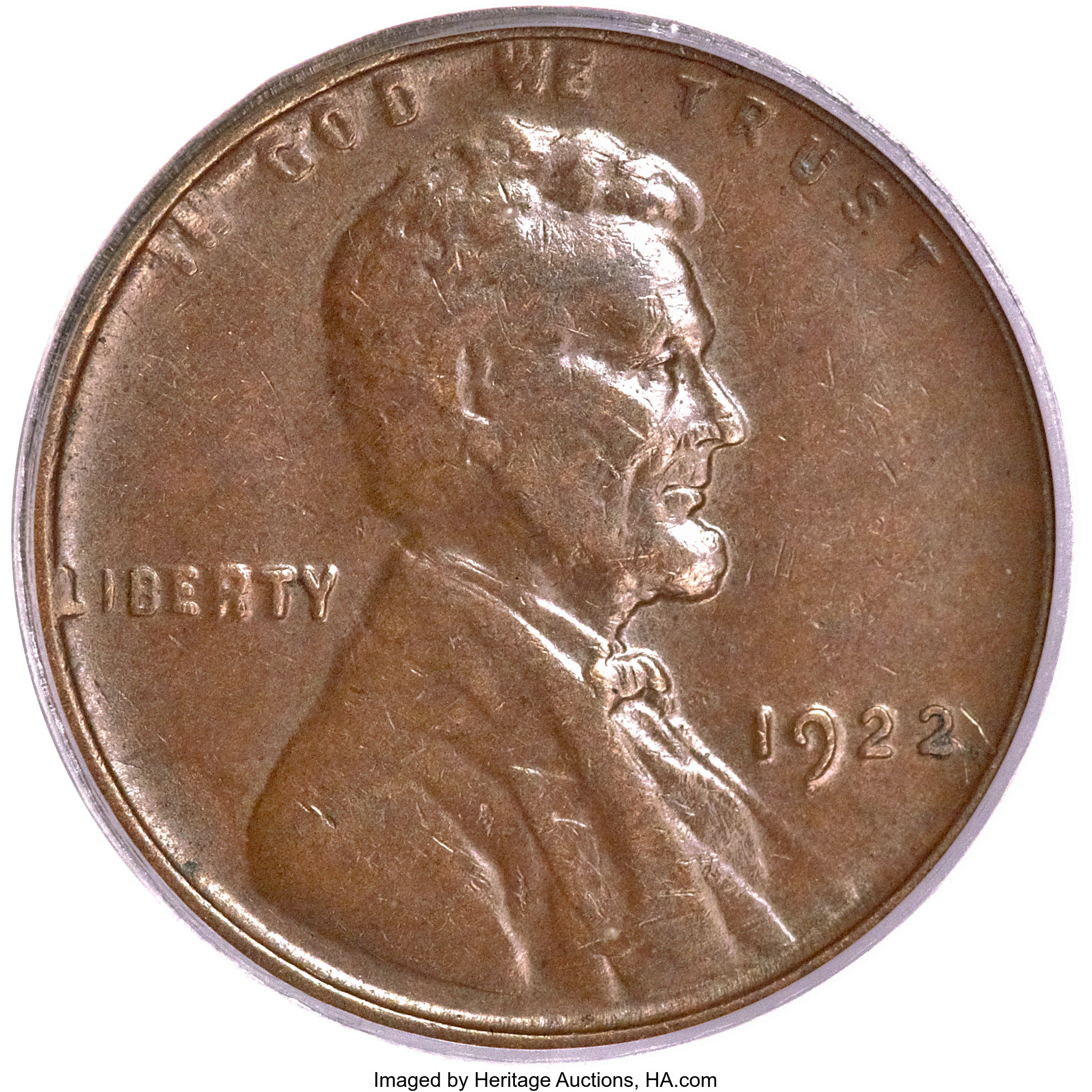 There are at least two varieties in the Lincoln wheat cent sub-series that countless penny enthusiasts vie for: one is the 1955 doubled die cent and the other is the so-called 1922 “Plain” No-D from the Denver Mint. It’s a fascinating die variety with curious origins. For many years it fooled some collectors into thinking that Philadelphia had actually minted Lincoln “pennies” in 1922.

Spoiler alert: The Philly Mint did not, in fact, make any 1922 cents, but you probably already knew that!

The Denver Mint struck 7,160,000 Lincoln cents in 1922, all intended to carry the “D” mintmark. What’s more, the “Mile-High” Mint was the only US Mint facility that made business-strike Lincoln cents that year – there are no San Francisco “S”-Mint 1922 cents.

It was a light year for United States coinage production anyway. A minor recession reduced the need for much new coinage, and the only other US types struck for circulation in 1922 were the Peace silver dollar and the Saint-Gaudens $20 gold double eagle, with the former taking the lion’s share of production – some 84,275,000 pieces made across all three then-operating mints versus 1,375,500 at Philadelphia for the golden latter. There’s a production-note caveat here: the US Mint struck a total of 71,661 Grant Memorial commemorative half dollars and 10,032 Grant Memorial commemorative gold dollars; some circulated examples exist of all varieties. But I digress… Back to the scoop on the 1922 plain cent!

With the Denver Mint solely taxed with the assignment of producing 1922 cents, the pressure was on to get those pennies out the door. And there were a few incidents that happened along the way. Apparently, a die clash involving the 1922 Lincoln cent dies occurred, and – as the widely accepted theory goes – a Denver Mint employee found an older obverse die and filed it a bit to spruce up its appearance. In the process, he inadvertently removed the “D” mintmark, and a rarity was born.

Professional Coin Grading Service (PCGS) estimates about 15,000 specimens exist across all grades, with perhaps 100 or fewer in grades of MS60 or better. This means the 1922 plain cent is, by population estimates, scarcer than the famous 1909-S VDB cent or even the 1955 doubled die. CPG® data show retail prices ranging from about $455 for a G4 specimen to $10,000 for a Brown example in MS60. You’ll pay much more still for a rarer Red-Brown specimen or virtually esoteric Red example.

Be wary of counterfeit 1922 No-D cents. And be especially wary of 1922 “Weak D” cents posing as the 1922 plain cent. The “Real McCoy” has a relatively weak obverse and very strong reverse. This particular die combination is popularly known as Die Pair #2 in Lincoln cent circles. Sharp-eyed enthusiasts with much experience under their belts may feel confident in buying a “raw” specimen, but for peace of mind it’s probably better to buy a 1922 Plain cent certified by a major third-party coin-grading firm.