33 NGC-certified Coins Each Realize Over $100,000 in Heritage ANA Auctions

33 NGC-certified Coins Each Realize Over $100,000 in Heritage ANA Auctions

SARASOTA, Fla. (August 19, 2019) — In just two nights, 33 coins certified by Numismatic Guaranty Corporation® (NGC®) were sold for more than $100,000 each by Heritage Auctions. The impressive results for NGC-certified coins came during the American Numismatic Association (ANA) World’s Fair of Money in Chicago on Aug. 14 and 15.

“We are very pleased with the strong results for NGC-certified coins in our ANA auction,” said Greg Rohan, president of Heritage Auctions. “That so many coins sold for six figures is a reflection of the strong — and growing — market.” 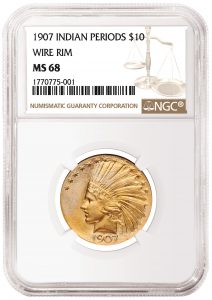 original high-relief Indian Head design, which was modified later that year to make it suitable for mass production.

This example, which is one of the finest known, was from the collection of Joan Zieg Steinbrenner, the late widow of famous New York Yankees owner George Steinbrenner.

The second-highest price for an NGC-certified coin in the sale was achieved by an 1856-O $20 in NGC AU 50 that realized $408,000. This coin was among a small production of 2,250 from the New Orleans Mint that year. Only 25 1856-O Double Eagles have been documented, two of which are in the Smithsonian Institution.

Another gold beauty in auctions dominated by the yellow metal was an 1879 Coiled Hair Stella graded NGC PF 63 that realized $336,000. The unusual $4 coin was made as a proposed type of US coinage but the idea was shelved and the resulting pattern coins are extremely rare.

An 1854-O Double Eagle graded NGC AU 53 also went for $336,000. This $20 coin was struck in New Orleans after most US gold coin production was shifted to the San Francisco Mint due to the California Gold Rush. Only 3,250 of these coins were produced in New Orleans in 1854 after 71,000 were struck there the year before.

An early Colonial coin, a unique variety of 1737 Higley Copper graded NGC VF 30, sold for $312,000. This variety is distinguished by a wagon wheel surrounded by the legend “THE WHEELE GOES ROUND.” These coins, which are among the earliest struck in what would eventually become the United States, were made by brothers Samuel and John Higley from copper they mined in Connecticut.

An 1843 Half Eagle graded NGC PF 66 Ultra Cameo also realized $312,000. The gold $5 was one of the very few proof coins struck in the US before the Mint began its program of commercial proof production in 1858. 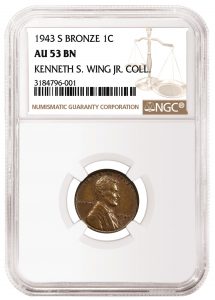 This 1943-S Bronze Lincoln Cent graded NGC AU 53 realized $216,000. A handful of bronze (or “copper”) cents were accidentally struck in 1943 when all 1943-dated cents were supposed to have been struck on zinc-coated steel planchets so copper could be conserved for US efforts to win World War II.

Another particularly significant coin sold by Heritage was an example of the famous 1943-S Bronze Lincoln Cent. Graded NGC AU 53, it realized $216,000. A handful of bronze (or “copper”) cents were accidentally struck in 1943. All 1943-dated cents were supposed to have been struck on zinc-coated steel planchets so that copper could be conserved for US efforts to win World War II.

This coin was discovered in 1944 by a 14-year-old boy, Kenneth S. Wing Jr. of Long Beach, California. Wing kept the coin throughout his life, despite Mint officials’ denial that any such coins existed. Its authenticity was not confirmed until 1957.

Among the top results was a 1714 Switzerland Lucerne 10 Ducat graded NGC MS 63, which sold for $162,000. This large and extremely rare gold piece is one of only three 10 Ducat coins struck in the entire history of the Canton of Lucerne.

An interesting coin from early Australia realized $144,000. The 1813 Australia “Holey Dollar” graded NGC AU 53 was struck on a holed Mexico 8 Reales in the British colony of New South Wales.

Also notable was a 1768 Great Britain Gold Pattern 2 Guineas graded NGC PF 64 that realized $132,000. It was the first large-sized gold coin produced during the reign of King George III.