Barber half dollars represent a beautiful and interesting series of coins. Gorgeous gems of this series are available and quite desirable right now, and justly deserve the spotlight right now. 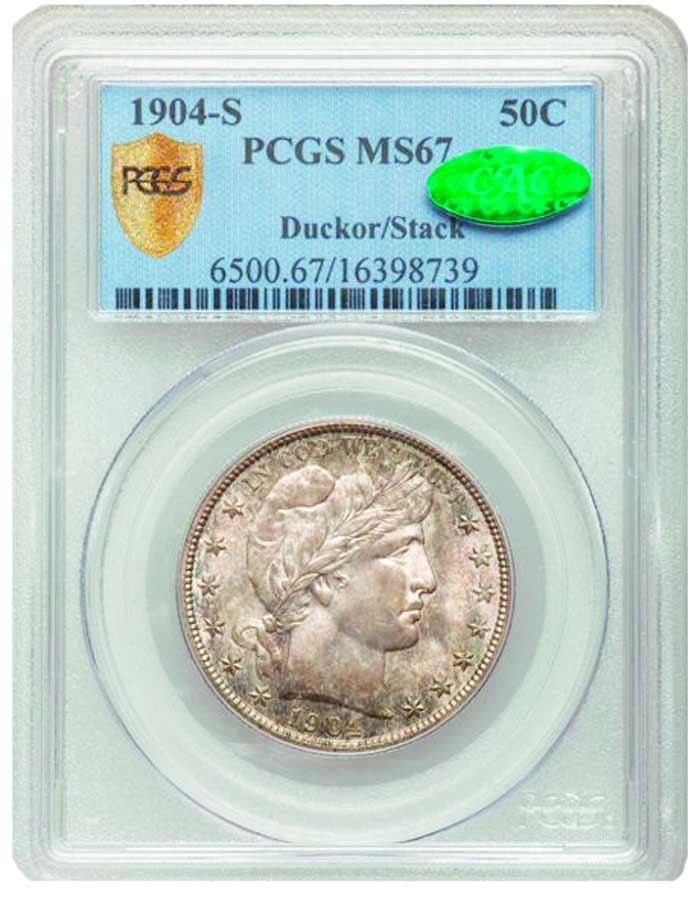 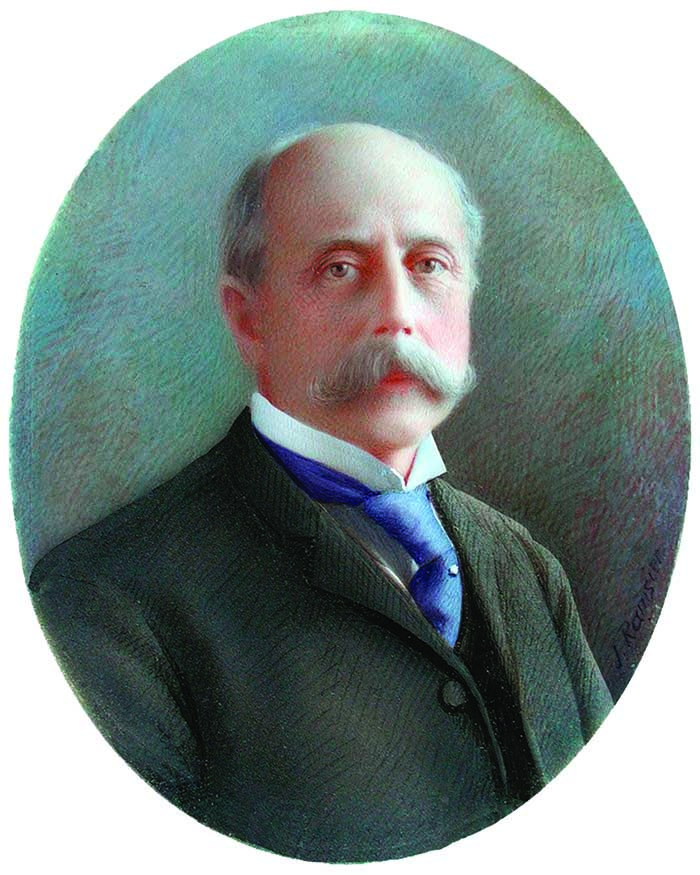 When I look for beauty and value in U.S. coinage, I immediately think of Barbers as these coins offer a stunning, original design and an array of surface qualities from blast white to rainbow tones. Barber coinage, which is comprised of dimes, quarters and half dollars, began in 1892 and continued through 1915, for the half dollar, and 1916 for the dimes and quarters. During the years prior to the start of the series many artists and governmental representatives, as well as the Mint Director, James P. Kimball, all felt that the Liberty Seated series had run its course and was simply second-rate when compared to coinage from other countries. Kimball envisioned design improvements for these coins to enhance and refresh their beauty. So, he put his thoughts into action by working with the United States Senate to craft and pass a bill instructing the Treasury Department to change the design of these coins for a minimum period of 25 years. This bill, which was drafted in the late 1880’s and eventually passed in 1890, mandated that all Barber denominations were to be redesigned after 1891. Initially, the design concept was going to be determined based on artists’ submissions. This “competition,” for lack of a better term, was unsuccessful for a multitude of reasons, including disagreements over appropriate compensation to artists; and, most importantly, a lack of worthy artist submissions according the esteemed judges, sculptor, Augustus Saint-Gaudens and engravers, Henry Mitchell and Charles Barber. 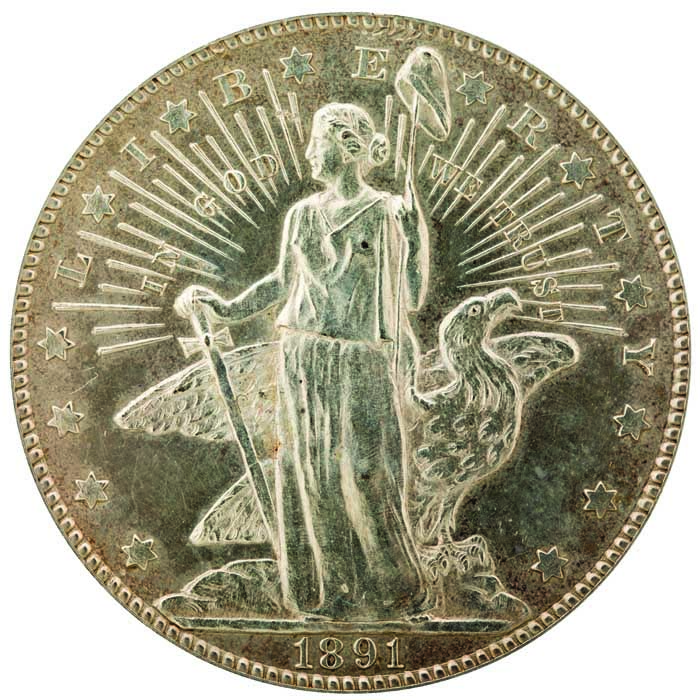 Barber's first obverse design for the half dollar.

They felt that none of the new designs presented were an improvement over the Seated coinage, leaving Mint Director Edward O. Leech with no alternative but to have Charles Barber spearhead the new design. Barber was the sixth engraver of the U.S. Mint who came from a long line of engravers out of London. He is credited for having created many foreign coins and medals along with numerous U.S. commemoratives, including the Liberty V Nickel and even a $4 Stella. Leech wanted the design concept for this coinage to be born out of the United States; as he wanted to retain the American essence, beauty and history of the Barbers while simultaneously giving the coins of other countries a run for their money. No pun intended. Barber would receive no extra monies for his efforts on the design, as Leech viewed it as part of Barber’s regular work responsibilities as a Mint engraver. Barber’s first design was somewhat reminiscent of a pattern seen on English coinage. Not to mention the fact that this pattern also served as the model for the Liberty Seated series. As you can imagine, Leech vehemently rejected this design in favor of a more French look on the obverse. He instructed that the Dime keep the same reverse that could be found on its Seated counterpart, with the reverse of the other two denominations returned to the national standard of the heraldic eagle. Leech gave Barber a very hard time with his designs, with arguments ensuing at every turn. The two disagreed on nearly every detail, right down to the amount of points on the reverse stars as well as the number of olive leaves and arrows. Barber dug his heels in and defended his opinions and actually persuaded Leech to go with his reverse. I personally agree with Barber with regard to his position on the stars. He argued that five points would be superior to six. His rationale was that it would differentiate our American coins from English coinage, as the English use six pointed stars. Additionally, five pointed stars are more significant to America since they appear on our nation’s flag. The following image is that of the first pattern Barber presented to Leech, which Leech promptly picked apart. The rays and wreath made the design cluttered and the depiction of both Liberty and the eagle on the obverse was simply too much. I personally agree with Leech on this point as the design is much too busy and would probably lead to weak striking as there was far too much detail. 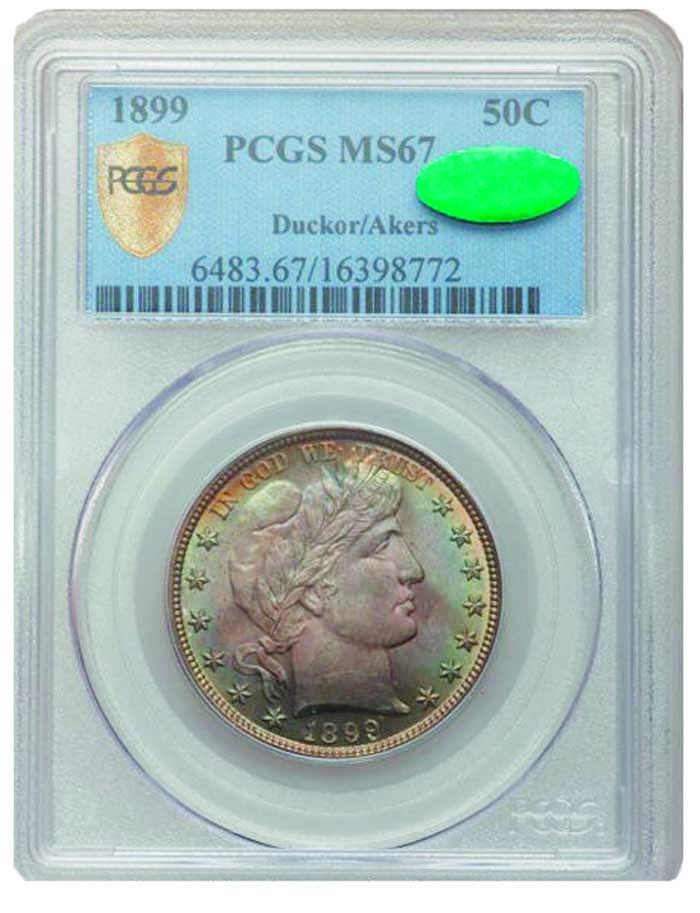 Barber actually concurred with Leech’s idea to exclude the wreath on the reverse design of both the quarter and half dollar, in October of 1891. In this same month, he submitted two models to Leech and the Treasury Secretary for examination; and yet again they disagreed on the amount of olive leaves and arrows. Surprisingly, all three did agree that the scroll was positioned most pleasingly behind the eagle’s neck rather than in front. By the end of October, Barber sent in three half dollar patterns, which included Judd-1765, Judd-1764 and what is thought to be Judd-1762. Leech chose the obverse of Judd-1764, as he felt it was the most dignified and the most eye appealing overall. The reverse, at this point, remained as an open item. It was not until the following month, November, 1891, that Barber would provide Leech with the last two patterns for the half dollars that shared the same finalized obverses. For the reverse, one had clouds above the eagle and the other did not. The reverse with the clouds was presumably Judd-1762 and the one without was Judd-1763. Ultimately, Judd-1763 was chosen by President Harrison and his cabinet as the approved design. Four long years had passed since Mint Director Kimball initially decided the design of this American coinage was inferior to that of other nations and required a complete makeover. In January of 1892, at the Philadelphia Mint, the very first Barber coins were struck. The half dollar nearly survived the 25-year minimum when it was replaced, after 1915, by the Walking Liberty design. All the Barber coinage that was minted, including the half dollars, were heavily circulated and worn leaving very few in Mint State condition from what were originally relatively high mintages. This phenomenon of excessive usage leaves collectors today with many condition rarities and a select few truly high end gems to choose from.

These gorgeous gems are available and quite desirable across all three denominations. Although, it is the half dollar that deserves the spotlight right now. Reason being is that some of the most incredible examples from the Duckor, Akers and Price Collections are selling today at as low as half the amount they were at auction 10 years ago. The following images show two gorgeously toned high grade examples from the Duckor and Akers Collections. The first being an 1899 and the second being from 1900. The first coin sold through Heritage Auctions in 2010 for a strong hammer price of $34,500. Five years later the very same coin sold for $19,975 also by Heritage. As for the second coin, it sold in the same sale as the previously mentioned coin for $32,200. Then, in 2020, it brought just $23,500 at auction. Based upon the toning, CAC approval and former collection pedigrees, there are no viable reasons for why this happened. The collector interest for these coins, and all they have to offer, certainly exists and are growing. Therefore, now is the time to buy, as prices low and interest in these coins are on the rise. Do so before these coins shift back to the full value they once were and all potential profit is lost.

The accompanying table depicts the significant decline in bid amounts for Barber half dollars in gem condition. After analyzing this sample of 31 dates out of the 73-coin set, the obvious take away here is that all dates lost significant value over the ten-year period. The question, though, lies in why some dates were hit harder than others. For example, the 1897-S and 1901-O did not lose value at all versus the 1899 and 1902 that dropped by over half. I would think it is safe to say that the rarer the date, the safer the investment even though there are no real key dates to this series. As you can see, it is only some of the scarcest dates that were left unaffected. The Philadelphia Mint type coin issues or quite simply the most common dates saw the absolute strongest hit with percentage changes ranging from 20% to 60%. It was surprising for me to see this trend as I thought the condition rarity of the coins would help keep the values afloat. 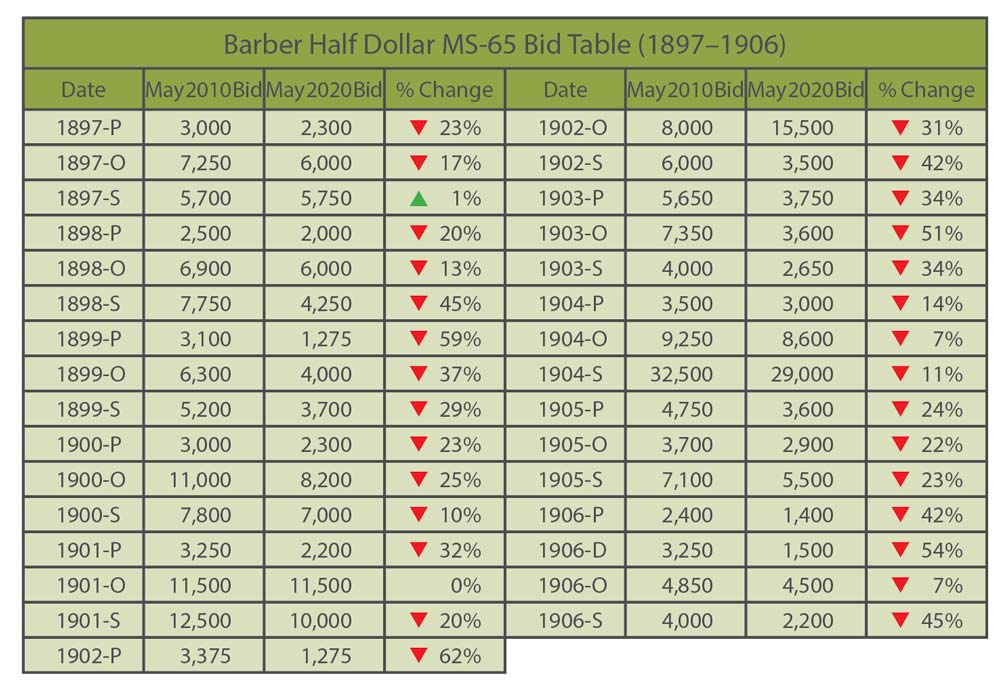 To summarize, the Barber half dollar series is one of great significance to collectors, investors, dealers and really all great numismatists. It is a highly collectible series that is incredibly popular and desired because of its stunning aesthetics and rarity in high gem grades. Beauty is rooted deep in the bones of these coins as they were created on the very basis that American coinage needed to stand out boldly and proudly amid foreign coinage. These half dollars were used extensively from the moment they came off the press leaving most coins harshly worn, and the select few gems extremely desirable and sought after by collectors. In my opinion, prices for these extraordinary gems are at an inexplicable low and can only go up from here. I say, do your research and take a look for yourself. Bid now as prices for these coins may rise faster than you think to where they once were. The quality and rarity are just too great to remain under the radar for very long.

Subscribe to August 2020 edition of Monthly Greysheet for the industry's most respected pricing and to read more articles just like this. 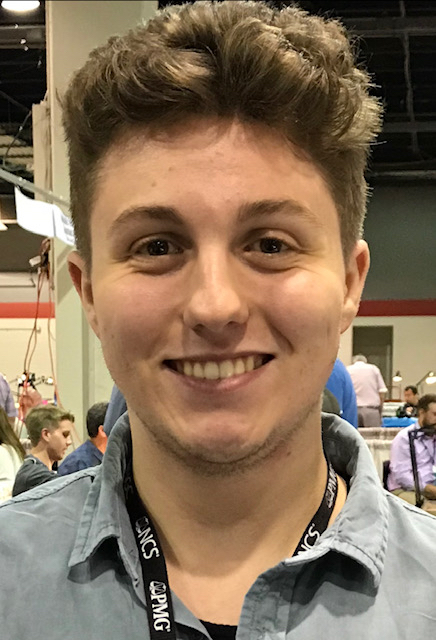