ANA Members Recognized for Accomplishments During World's Fair of Money 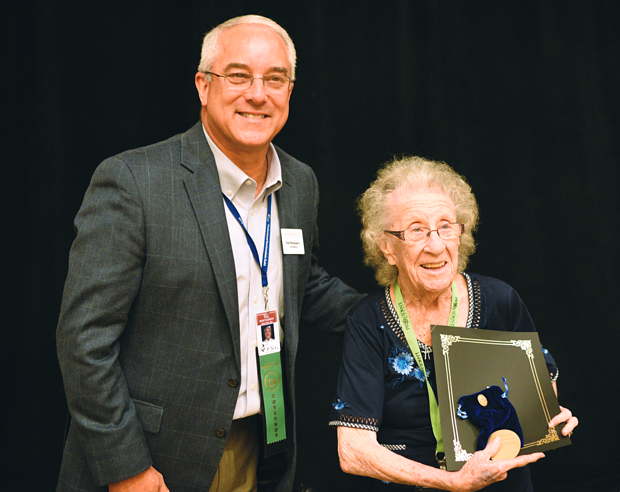 Numismatics is the study and collection of coins, paper money, tokens and medals, but at the American Numismatic Association (ANA) it is the people who truly define the hobby. Several individuals were recognized for their service and commitment to numismatics during the Association's Member & Awards celebration and its 131st Annual Awards Banquet during the Chicago World's Fair of Money®, August 16-20.

The Elvira Clain-Stefanelli Memorial Award for Achievement in Numismatics is presented annually to a woman who has made significant contributions to numismatics through her research, leadership, and/or mentorship and who has demonstrated a longtime commitment to the betterment of numismatics. This year's recipient, at 99 years old, is Kay Edgerton Lenker, who has whole-heartedly served the collecting community for more than six decades.

In 1944, at age 22, she graduated from Immaculata College with a bachelor's degree in math and physical science and joined the U.S. Navy in the midst of World War II. The following year, she earned a certificate in meteorological engineering from the Massachusetts Institute of Technology. Lenker was stationed in Washington, D.C., and conducted numismatic research with Elvira Clain-Stefanelli, the award's namesake.

A 60-year member, Lenker joined the ANA in 1961, and by 1968, she was the publicity chair for the Association's 77th anniversary convention in San Diego. She has since chaired four other ANA shows in various capacities and three ANA committees. Certified in five classes, Lenker served as an exhibit judge from 1976 to 2011 and created countless displays of her own that she entered in conventions over a 50-year time span. In 1995 she endowed the Young Numismatist United States Coins exhibit class prize, the Edgerton-Lenker Memorial Award, in memory of her two numismatic husbands.

That same year, the ANA's budget did not include appreciation medals for exhibitors and judges, so Lenker plaid for them herself. She served on the ANA Board of Governors (1995-2003), and in 2000 she donated $1,000 toward renovations of ANA headquarters. A generous patron, Lenker has, to date, gifted more than $15,000 and innumerable hours of her time and expertise to the Association.

The San Diego, California, resident is also fully immersed in her local numismatic scene. Lenker has been an officer in nearly every organization she's joined, which numbers over a dozen in addition to the ANA. She edited the San Diego County Inter-Club Numismatic Council's Bulletin for 51 years, retiring from the post only five years ago. She has a way with words and published a numismatic cookbook composed of recipes submitted by members of southern California coin clubs that was launched in conjunction with the ANA's 1983 San Diego convention.

Lenker’s collecting specialties include U.S. coins and medals; world primitive money; and currency relating to Catherine the Great, Maria Theresa, and Leopold I of Austria (aka “the Hogmouth”). Lenker has been recognized with the Numismatic Literary Guild’s Ribbit Award (2009) and Clemy Award (2011), along with 15 other accolades from multiple organizations, including the ANA’s Goodfellow Award (1983), Presidential Award (1999, 2011), Outstanding District Representative award (1992), and Glenn Smedley Memorial Award (2003, 2016).

Each year, the Association honors an Outstanding District Representative who sets the standard for promoting the hobby and ANA-member clubs throughout the country. This year's recipient, Danny Bisgaard, has been recognized with the 2022 Lawrence J. Gentile Sr. Memorial Award for Outstanding Adult Advisor .

As secretary and former president of the Pacific Northwest Numismatic Association, Bisgaard has enthusiastically represented the hobby in his district of Oregon. He also works as the treasurer for the Salem Numismatic Society and previously served as the organization's president. Additionally, Bisgaard edited the Salem Numismatic Society's monthly newsletter for over 20 years. He is active in the hobby as a member of numerous other clubs in the area, including the Willamette Coin Club and Polk County Coin Club. He also serves as bourse chair for the Salem and Polk County Club shows.

An ANA member since 2004, Bisgaard received an ANA Presidential Award in 2012 and the Goodfellow Award in 2015 for his service as host chair of the National Money Show® in Portland, Oregon.

In an effort to recognize the most important collectors, scholars and hobby professionals of all time, the American Numismatic Association maintains the Numismatic Hall of Fame (HOF) at its Colorado Springs headquarters. ANA historian Jack W. Ogilvie proposed the Hall of Fame in the mid-1960s. By 1969 bylaws were drafted, and the HOF inducted its first honorees that same year. The next group was enshrined in 1970, with subsequent honorees inducted every two years. Today, individuals are recognized annually, with "modern" numismatists inducted in odd years, and "historic" personages in even years. This year, the HOF welcomes two men – Jeremiah Colburn and Charles T. Steigerwalt. 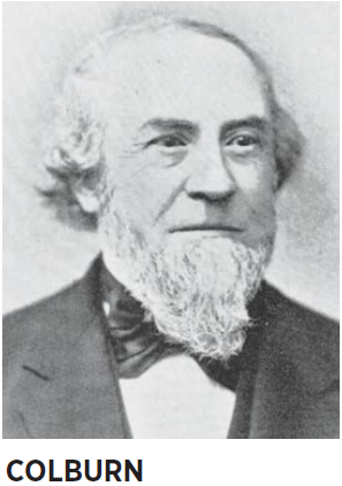 Jeremiah Colburn of Cambridge, Massachusetts, was born on January 15, 1815, the eighth of ten children. As a youngster, he worked as a clerk for Colonel Seth J. Thomas's haberdashery. He took over the business in 1840.

In 1852 Colburn was appointed by President Franklin Pierce as U.S. appraiser in the custom house for the Port of Boston, a position he held until June 1860. After this period, Colburn spent most of his time on his antiquarian and literary endeavors.

A longtime bibliophile, he acquired many valuable books and pamphlets relating to American history and also authored books on the topic. Beginning in 1857, Colburn wrote numerous articles on American coins for the New York Historical Magazine.

In 1859 American Numismatic Society (ANS) founder Augustus B. Sage depicted Colburn, along with eight other prominent numismatists, on his series of Numismatic Gallery tokens. Colburn was named an honorary member of the ANS on Dec. 23, 1867. In 1862-63, W.E. Woodward sold Colburn's collection, which included many choice and rare United States coins, including large cents.

Beginning in 1870, Colburn was an editor of the American Journal of Numismatics. He also served as a major contributor to Sylvester Sage Crosby's landmark publication, The Early Coins of America, published in 1875.

Colburn was a driving force behind the establishment of the Boston Numismatic Society in 1860. He served as the organization's vice president and eventually president in 1884. Seven years after his death from pneumonia in Dec. 1891, the organization gifted its holdings of coins and books to the Museum of Fine Arts, Boston. 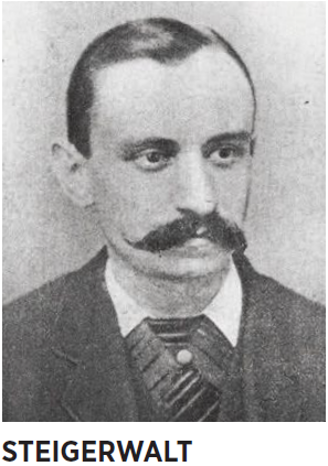 Born in Lancaster, PA, on June 28, 1858, auctioneer and magazine publisher Charles T. Steigerwalt became an early copper half cent and cent collector at a young age, and his interest in both series continued throughout his life.

From 1878 to 1881, Steigerwalt published The Coin Journal, a periodical that offered coins for sale, questions for the editor, and auction results. In July 1883, he debuted Steigerwalt's Coin Journal, of which eight issues were published. His third publication, Numismatic News (not to be confused with Chester L. Krause's periodical of the same name), was printed in 1895-96. Twelve issues of his final publication, The Curio, were released between 1898 and 1909. He offered various items for sale, both numismatic and non-numismatic.

Steigerwalt found great success as an auctioneer. His grandfather was a butcher by trade and owned a few buildings in Lancaster that Steigerwalt converted into auction rooms for his business. The enterprising collector issued 71 auction catalogs between 1881 and 1910. In addition to Lancaster, he also held sales in Philadelphia and New York City. Steigerwalt was the first dealer to effectively utilize fixed price lists (110 of them between 1885 and 1911) to sell his inventory.

Steigerwalt first began advertising in The Numismatist in 1891 and joined the ANA the following year as member no. 74. In Jan. 1902, he served on the Association's Board of Governors in the role of counterfeit detector, a position he held until June 1907. This prominent post made Steigerwalt well known in the numismatic community, and his auction business flourished. As an author, Steigerwalt wrote a handful of articles on half cents and large cents for the ANA's official publication between 1906 and 1909.

Steigerwalt suffered a stroke in 1911, which led to a number of health issues. He checked into a local hospital in Lancaster and tragically took his own life on March 29, 1912, at the age of 53. His Numismatist obituary, published in the May 1912 issue, describes him as "one of the oldest, best known, and most prominent numismatists in this country."