Reports from multiple dealers we spoke to reflected an upbeat outlook after the conclusion of the Whitman Baltimore Expo. From the beginning of the show wholesale tradi 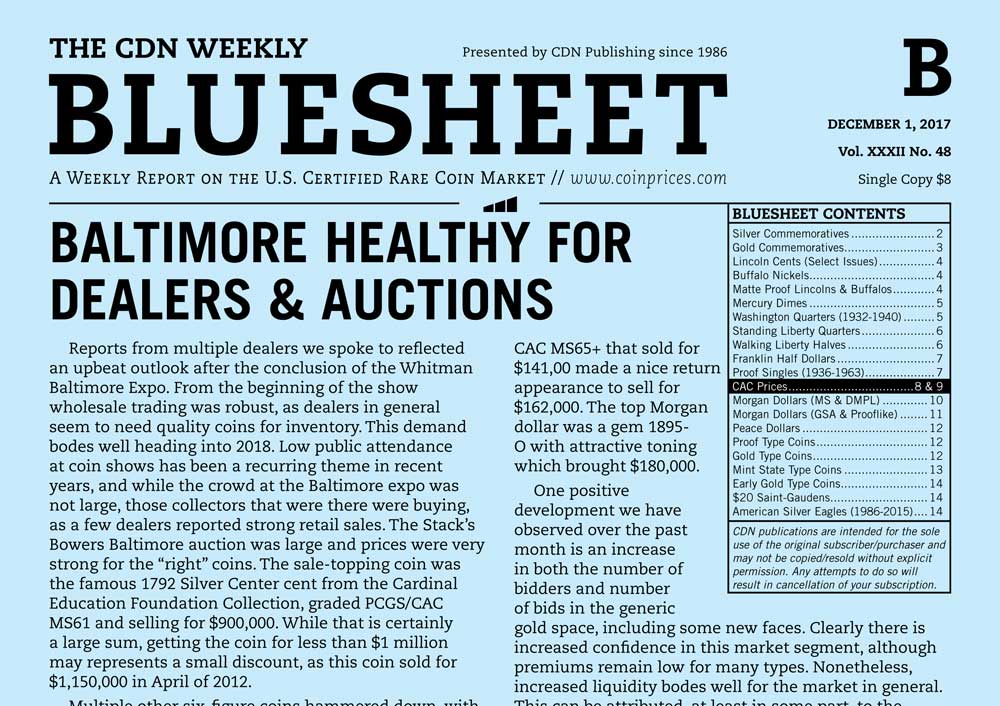 Reports from multiple dealers we spoke to reflected an upbeat outlook after the conclusion of the Whitman Baltimore Expo. From the beginning of the show wholesale trading was robust, as dealers in general seem to need quality coins for inventory. This demand bodes well heading into 2018. Low public attendance at coin shows has been a recurring theme in recent years, and while the crowd at the Baltimore expo was not large, those collectors that were there were buying, as a few dealers reported strong retail sales. The Stack’s Bowers Baltimore auction was large and prices were very strong for the “right” coins. The sale-topping coin was the famous 1792 Silver Center cent from the Cardinal Education Foundation Collection, graded PCGS/CAC MS61 and selling for $900,000. While that is certainly a large sum, getting the coin for less than $1 million may represents a small discount, as this coin sold for $1,150,000 in April of 2012.

Multiple other six-figure coins hammered down, with a 1796 Stars Obverse quarter eagle, graded NGC MS63H at $324,000. A 1796 No Stars quarter eagle graded PCGS AU53 selling for $150,000 is interesting due to the fact that another example of this one year type was sold just a week prior from the Newman Collection. Normally collectors are given the chance to acquire this coin once or twice in a calendar year. Two additional newsworthy coins from the Cardinal Collection are a PCGS MS64 1797 Small Letters Draped Bust dollar, of the 9×7 Stars variety at $264,000 and a 1794 Flowing Hair half dollar, PCGS AU58+ at $252,000. It has thus far been uncommon to see coins from the Pogue Collection come back on the market, but an 1807 Draped Bust quarter, PCGS/CAC MS65+ that sold for $141,00 made a nice return appearance to sell for $162,000. The top Morgan dollar was a gem 1895-O with attractive toning which brought $180,000.

One positive development we have observed over the past month is an increase in both the number of bidders and number of bids in the generic gold space, including some new faces. Clearly there is increased confidence in this market segment, although premiums remain low for many types. Nonetheless, increased liquidity bodes well for the market in general. This can be attributed, at least in some part, to the fact that the grading services have been much more consistent to their standard in recent months. When grading is consistent, it is proven that dealers are much more willing to bid sight-seen. In this issue will also be found updates from the aforementioned auctions across multiple series. In line with our Monthly Supplement, CAC pricing for 20th century gold has also been updated.