Central States Numismatic Society (CSNS) may technically be a regional coin club serving 13 mid-western states, but its annual convention is one of the largest and best-attended events on the numismatic calendar. 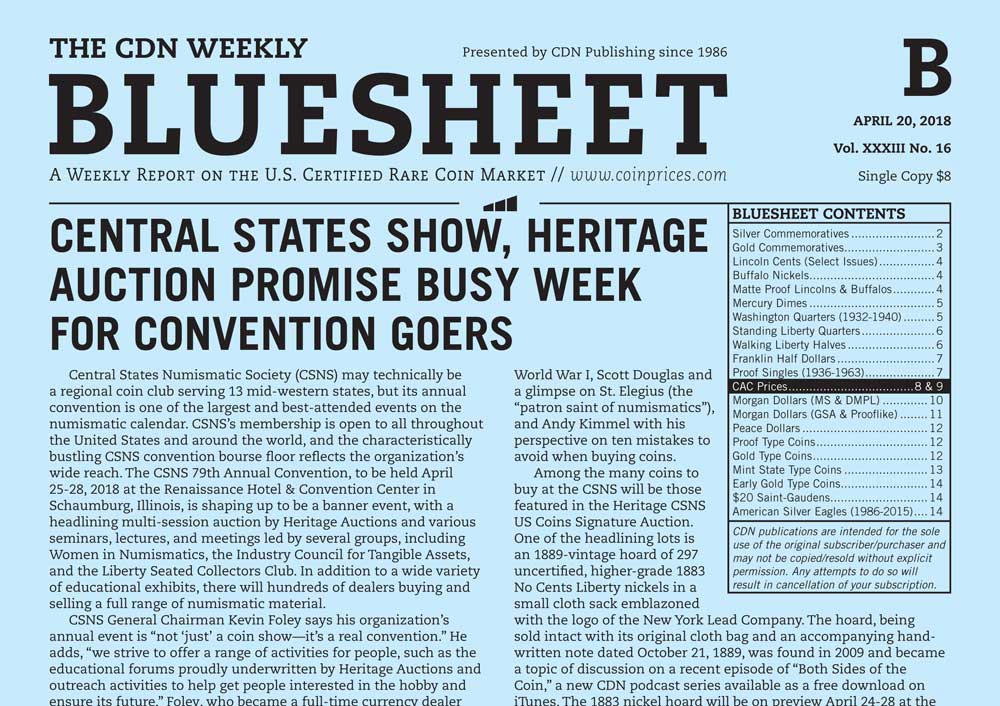 Central States Numismatic Society (CSNS) may technically be a regional coin club serving 13 mid-western states, but its annual convention is one of the largest and best-attended events on the numismatic calendar. CSNS’s membership is open to all throughout the United States and around the world, and the characteristically bustling CSNS convention bourse floor reflects the organization’s wide reach. The CSNS 79th Annual Convention, to be held April 25-28, 2018 at the Renaissance Hotel & Convention Center in Schaumburg, Illinois, is shaping up to be a banner event, with a headlining multi-session auction by Heritage Auctions and various seminars, lectures, and meetings led by several groups, including Women in Numismatics, the Industry Council for Tangible Assets, and the Liberty Seated Collectors Club. In addition to a wide variety of educational exhibits, there will hundreds of dealers buying and selling a full range of numismatic material.

CSNS General Chairman Kevin Foley says his organization’s annual event is “not ‘just’ a coin show—it’s a real convention.” He adds, “we strive to offer a range of activities for people, such as the educational forums proudly underwritten by Heritage Auctions and outreach activities to help get people interested in the hobby and ensure its future.” Foley, who became a full-time currency dealer in 1977 and has served in his current capacity at CSNS for nearly a decade, says this year’s convention will feature more than 300 booths and nearly 600 business entities representing a wide array of numismatic sectors.

The Heritage Numismatic Education Forum features seven separate events spanning the course of the show. Foley is proud to offer a full schedule of speakers for the series, which is capped off on Saturday, April 28, with a presentation by former Fox News contributor and attorney, Tamara Holder. “She will deliver a talk on sexual harassment liability issues for numismatic employers, event sponsors, clubs, and organizations. Her talk will be very topical.” Other presenters include Dale Lukanich discussing Operation Bernhard counterfeit notes, Larry Lee and his talk on Indian peace medals from the Crane Collection, Peter Huntoon and a look at patented lettering on large-size US currency, Joe Boling and his discussion on the counterfeit paper money issues that arose after World War I, Scott Douglas and a glimpse on St. Elegius (the “patron saint of numismatics”), and Andy Kimmel with his perspective on ten mistakes to avoid when buying coins.

Among the many coins to buy at the CSNS will be those featured in the Heritage CSNS US Coins Signature Auction. One of the headlining lots is an 1889-vintage hoard of 297 uncertified, higher-grade 1883 No Cents Liberty nickels in a small cloth sack emblazoned with the logo of the New York Lead Company. The hoard, being sold intact with its original cloth bag and an accompanying hand-written note dated October 21, 1889, was found in 2009 and became a topic of discussion on a recent episode of “Both Sides of the Coin,” a new CDN podcast series available as a free download on iTunes. The 1883 nickel hoard will be on preview April 24-28 at the Renaissance Schaumburg Convention Center Hotel.