As the majority of the national rare coin dealers gather in Long Beach for the final expo there of 2017, much has been written in the aftermath of the ANA World’s Fair 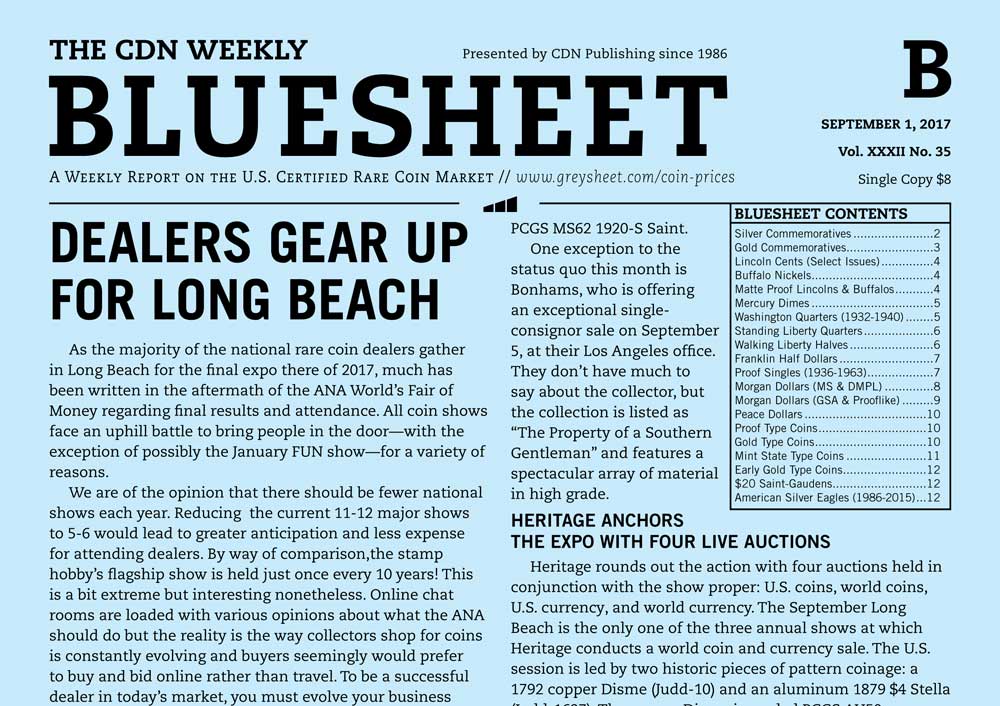 As the majority of the national rare coin dealers gather in Long Beach for the final expo there of 2017, much has been written in the aftermath of the ANA World’s Fair of Money regarding final results and attendance. All coin shows face an uphill battle to bring people in the door—with the exception of possibly the January FUN show—for a variety of reasons.

We are of the opinion that there should be fewer national shows each year. Reducing the current 11-12 major shows to 5-6 would lead to greater anticipation and less expense for attending dealers. By way of comparison,the stamp hobby’s flagship show is held just once every 10 years! This is a bit extreme but interesting nonetheless. Online chat rooms are loaded with various opinions about what the ANA should do but the reality is the way collectors shop for coins is constantly evolving and buyers seemingly would prefer to buy and bid online rather than travel. To be a successful dealer in today’s market, you must evolve your business strategy to find buyers on the web. We will continue to examine this topic in future articles.

The auction activity in Long Beach follows a familiar pattern starting with Goldberg Coins and Collectibles who have their Pre-Long Beach sale starting September 3rd. Consisting of United States coins and continuing with Ancients and World coins, the U.S. portion is led by some appealing lots of gold coinage which continues to be the most active part of the market. Led by a PCGS PF64 Deep Cameo 1869 Double Eagle, other eye-catching lots include a PCGS PF62 1879 Flowing Hair Stella, a PCGS/CAC MS64 1931-D Saint-Gaudens, a PCGS MS65 1932 Saint-Gaudens, and a PCGS MS62 1920-S Saint.

One exception to the status quo this month is Bonhams, who is offering an exceptional single-consignor sale on September 5, at their Los Angeles office. They don’t have much to say about the collector, but the collection is listed as “The Property of a Southern Gentleman” and features a spectacular array of material in high grade.

Heritage rounds out the action with four auctions held in conjunction with the show proper: U.S. coins, world coins, U.S. currency, and world currency. The September Long Beach is the only one of the three annual shows at which Heritage conducts a world coin and currency sale. The U.S. session is led by two historic pieces of pattern coinage: a 1792 copper Disme (Judd-10) and an aluminum 1879 $4 Stella (Judd-1637). The copper Disme is graded PCGS AU50, one of 19 known, and is a piece which provide numismatists a look at our nation’s earliest attempts at a Federal coinage. The aluminum Stella, certified PCGS/CAC PR67 and one of just six known, was struck at a much different time in our history. More than a decade after the destruction caused by the Civil War, America was returning to prosperity and certain members of Congress felt the need to strike a gold coin on the same standard of European gold coins. This was authorized and thus the now-famous gold Stellas were struck in 1879 and 1880. Congress quickly reversed course, creating the rarity that the gold Stellas enjoy today. Adding to the appeal is the pedigree to the Harry Bass Collection.

One of the problems with coin shows are that many dealers wind down or leave before retail customers are able to attend weekends. The low priority of retail business for some dealers is obvious and drives more collectors online.