The certified coin market started 2018 with strength for scarce to rare items in the Heritage FUN United States coin auction. One of the highlight coins in the Platinum night session was a 1942/1 Mercury dime, certified PCGS/CAC MS66 Full Bands, that brought $120,000. 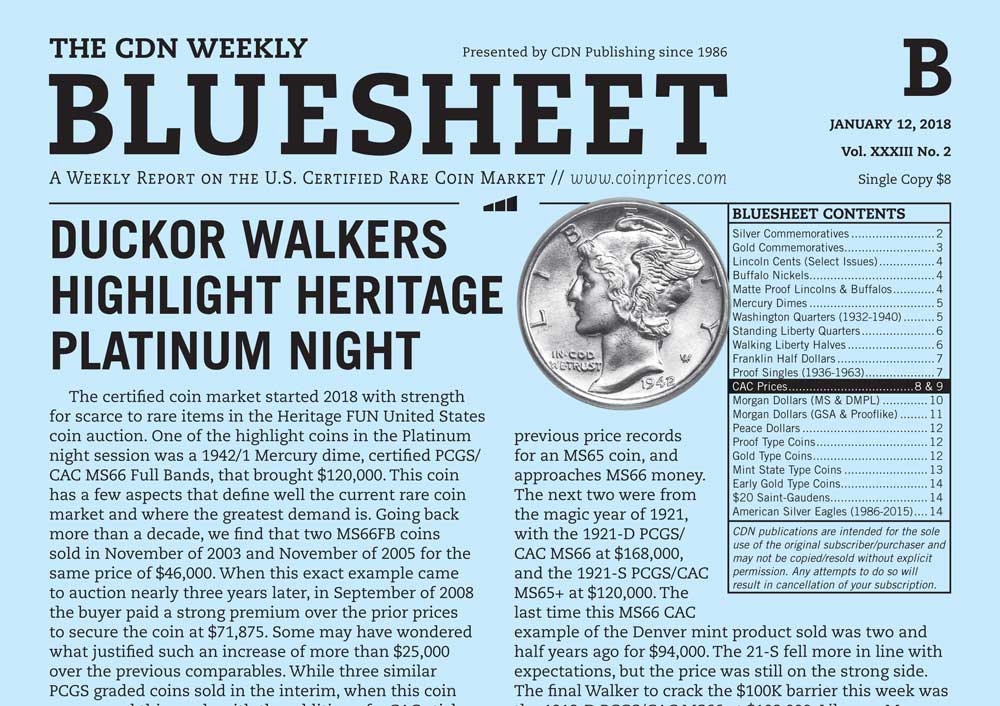 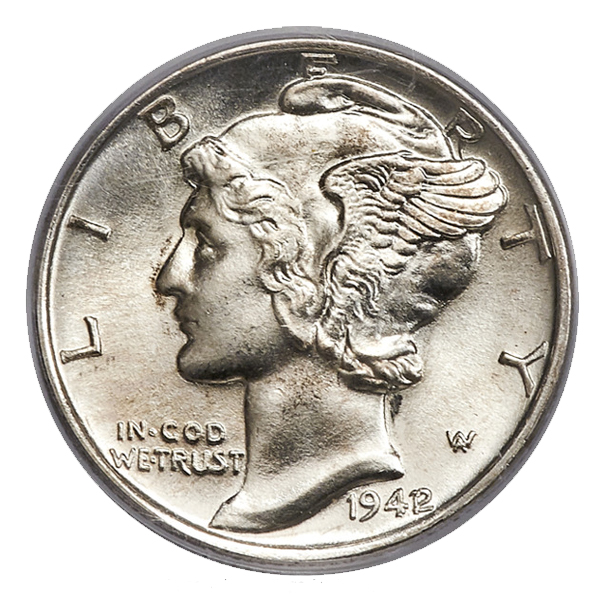 The certified coin market started 2018 with strength for scarce to rare items in the Heritage FUN United States coin auction. One of the highlight coins in the Platinum night session was a 1942/1 Mercury dime, certified PCGS/CAC MS66 Full Bands, that brought $120,000. This coin has a few aspects that define well the current rare coin market and where the greatest demand is. Going back more than a decade, we find that two MS66FB coins sold in November of 2003 and November of 2005 for the same price of $46,000. When this exact example came to auction nearly three years later, in September of 2008 the buyer paid a strong premium over the prior prices to secure the coin at $71,875. Some may have wondered what justified such an increase of more than $25,000 over the previous comparables. While three similar PCGS graded coins sold in the interim, when this coin reappeared this week, with the addition of a CAC sticker, it sold for the aforementioned $120,000, representing a 67% gain over what the coin sold for in 2008. In this case we see a continuation of strong demand for the perceived best, finest known pieces and new high watermarks in terms of price for such a rarity. It also shows that the idea of paying a strong premium for the best today may often lead to a positive return down the road.

It is not every day when the market sees 20th century coins sell for six figures, but we had four of them in the Steven L. Duckor Collection of Walking Liberty half dollars. The lead coin in this collection was a 1919-D PCGS/CAC MS65, selling for $240,000, which blows away previous price records for an MS65 coin, and approaches MS66 money. The next two were from the magic year of 1921, with the 1921-D PCGS/CAC MS66 at $168,000, and the 1921-S PCGS/CAC MS65+ at $120,000. The last time this MS66 CAC example of the Denver mint product sold was two and half years ago for $94,000. The 21-S fell more in line with expectations, but the price was still on the strong side. The final Walker to crack the $100K barrier this week was the 1918-D PCGS/CAC MS66 at $108,000. Like our Mercury dime example above, these examples show that in this market, buying the best examples of key issues yields the best results more often than not. This concept does not only apply to six-figure coins. Taking the time to seek out the best specimen of a $3,000 coin—for example—could lead to the same performance, when measured on a percentage basis.

Long-time coin dealer, Bob Paul, of Philadelphia reported the sale over $1 million of a 1943 copper Lincoln cent graded PCGS MS63 RD. According to Paul, “this is the first red Lincoln to sell over $1,000,000.”

Really enjoyed article on my Walker set in Platinum night, the prices astounded me! Coins brough5 40% higher than I thought the morning of the auction. Other surprise pric3s beside the four coins going for over $100,000 were the 1917-D (O) pcgs 66/CAC, 1917-D (R) pcgs 65+/CAC, and the 1920-D pcgs 66/CAC. Coins wer3 all pcgs and CAC. Also having John Albanese give % CACed of each date (a first) was pivitol. Ex 1917-D (R)/cac 13% pass rate,! Please send me a copy of the Blue Sheet about my walkers. I am a monthly prescriber. Also include Walkers in you new CAC prices in Blue Sheet! You now have current prices on cac Walkers. Thanks