While the majority of dealers involved with U.S. coinage was attending the Long Beach Expo, currency specialists were in Kansas City at the International Paper Money Sh 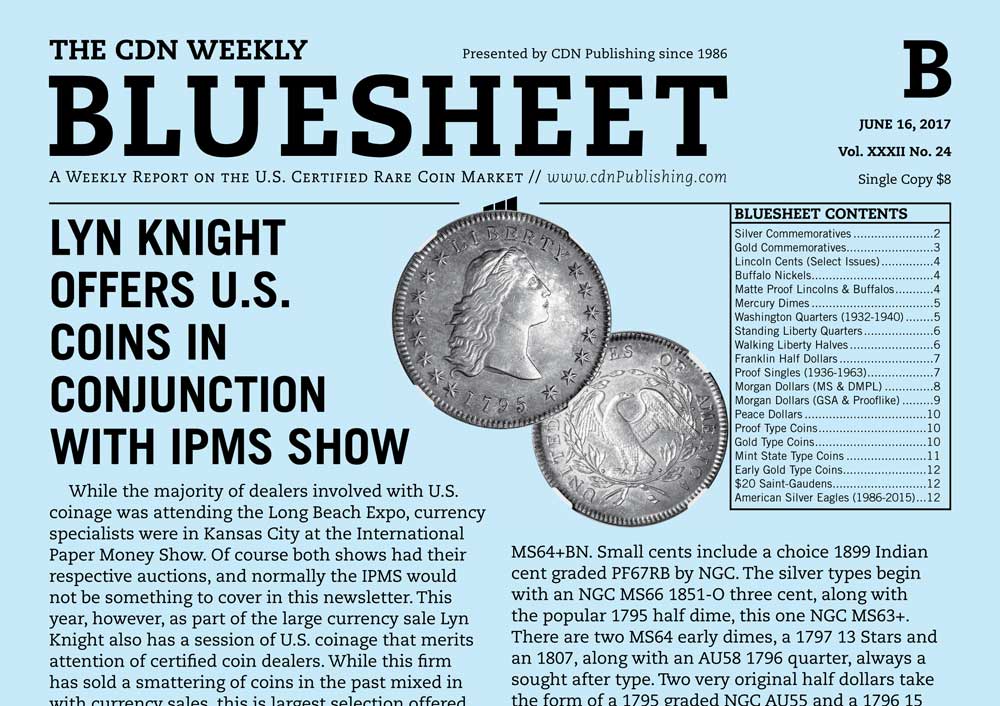 While the majority of dealers involved with U.S. coinage was attending the Long Beach Expo, currency specialists were in Kansas City at the International Paper Money Show. Of course both shows had their respective auctions, and normally the IPMS would not be something to cover in this newsletter. This year, however, as part of the large currency sale Lyn Knight also has a session of U.S. coinage that merits attention of certified coin dealers. While this firm has sold a smattering of coins in the past mixed in with currency sales, this is largest selection offered to date. Primarily consisting of a type set, the coins define what dealers call “fresh” and recently graded by NGC. The lot descriptions in many cases tell the date of purchase, who the purchase was from, and the purchase price. Many of the dates are in the 1960s and the dealer names read like a list of who’s who of the past, such as Abe Kosoff, Abner Kreisburg, and Ed Milas. 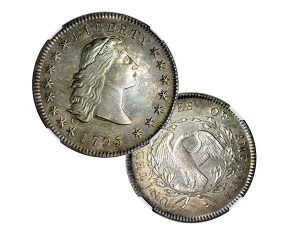 Starting with copper there is a 1793 half cent graded NCG MS61+BN, a 1793 Chain cent graded NGC XF40, a 1795 Lettered Edge cent in a NGC MS62BN holder, and an 1814 Crosslet 4 cent certified NGC MS64+BN. Small cents include a choice 1899 Indian centgraded PF67RB by NGC. The silver types begin with an NGC MS66 1851-O three cent, along with the popular 1795 half dime, this one NGC MS63+. There are two MS64 early dimes, a 1797 13 Stars and an 1807, along with an AU58 1796 quarter, always a sought after type. Two very original half dollars take the form of a 1795 graded NGC AU55 and a 1796 15 Stars in a VG8 holder. A gem Arrows and Rays half is also a beauty. The clear overall highlight is the NGC MS61 1795 Flowing Hair dollar that was purchased in 1973, and its companion 1795 Draped Bust dollar graded AU53. Perhaps the most eye-appealing coin in this collection is the PF66* Cameo 1878 Trade dollar, with blue, gold, and russet toning. A crusty NGC AU53 1851-O double eagle highlights the few gold coins in the sale. Overall it is notable that virtually all of the coins in the collection are original, considering that so many coins from this time period have been “improved” or doctored in some way.