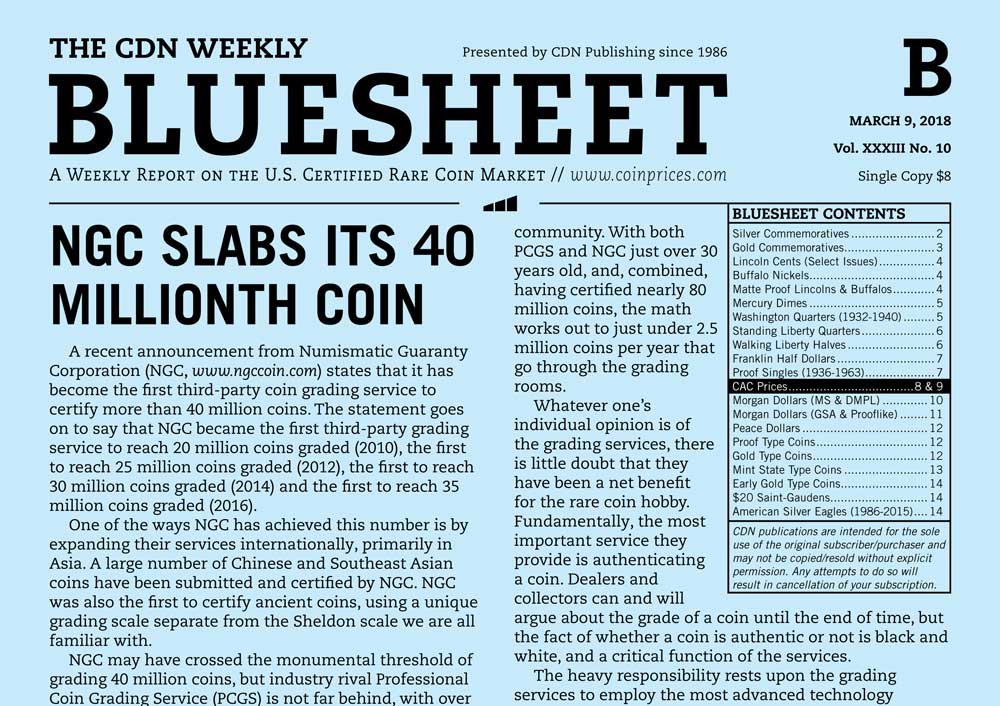 One of the ways NGC has achieved this number is by expanding their services internationally, primarily in Asia. A large number of Chinese and Southeast Asian coins have been submitted and certified by NGC. NGC was also the first to certify ancient coins, using a unique grading scale separate from the Sheldon scale we are all familiar with.

NGC may have crossed the monumental threshold of grading 40 million coins, but industry rival Professional Coin Grading Service (PCGS) is not far behind, with over 38.5 million coins certified to date. When taken in total, that is a staggering number of coins that have been certified. While the proliferation of bullion coins and new issues each year from the various world mints ensures that this number will continue to increase, there is also a fair number of classic U.S. coins that have yet to be certified.

It is hard to estimate how many “raw” (or uncertified) coins lurk in old-time collections and in the back of small coin shops across the nation, but the number could be substantial. While there may not be any great rarities hiding in these groups, there are surely still pieces that are to be preserved and marketed to the collecting community. With both PCGS and NGC just over 30 years old, and, combined, having certified nearly 80 million coins, the math works out to just under 2.5 million coins per year that go through the grading rooms.

Whatever one’s individual opinion is of the grading services, there is little doubt that they have been a net benefit for the rare coin hobby. Fundamentally, the most important service they provide is authenticating a coin. Dealers and collectors can and will argue about the grade of a coin until the end of time, but the fact of whether a coin is authentic or not is black and white, and a critical function of the services.

The heavy responsibility rests upon the grading services to employ the most advanced technology and highest levels of numismatic education to detect counterfeit and altered coins, and to describe them as such. In contrast, consider the fine art market, where the question of authenticity is answered by the (sometimes) differing opinion of multiple experts and the occurrence of counterfeit paintings crossing the auction block has happened numerous times for many millions of dollars.

The assurance that every coin in a NGC or PCGS holder is authentic provides a level of confidence in the market to the point that concerns over slabbed counterfeits don’t usually cross the mind of dealers in the course of conducting business. No matter how many coins NGC and PCGS certify going forward, this must be of paramount importance.