BLUESHEET: SHOULD COIN DEALERS TRADE IN BITCOIN AS WELL?

The majority of us in this business spend the majority of their time thinking about, looking at, buying, and selling coins. In their most fundamental states, coins are 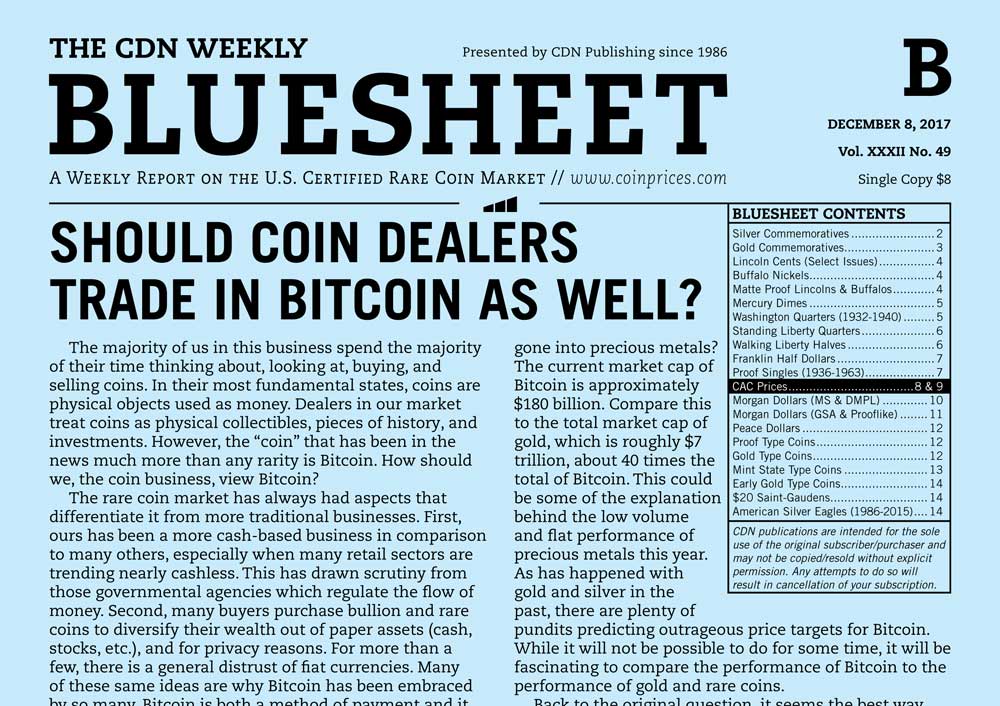 BLUESHEET: SHOULD COIN DEALERS TRADE IN BITCOIN AS WELL?

The majority of us in this business spend the majority of their time thinking about, looking at, buying, and selling coins. In their most fundamental states, coins are physical objects used as money. Dealers in our market treat coins as physical collectibles, pieces of history, and investments. However, the “coin” that has been in the news much more than any rarity is Bitcoin. How should we, the coin business, view Bitcoin?

The rare coin market has always had aspects that differentiate it from more traditional businesses. First, ours has been a more cash-based business in comparison to many others, especially when many retail sectors are trending nearly cashless. This has drawn scrutiny from those governmental agencies which regulate the flow of money. Second, many buyers purchase bullion and rare coins to diversify their wealth out of paper assets (cash, stocks, etc.), and for privacy reasons. For more than a few, there is a general distrust of fiat currencies. Many of these same ideas are why Bitcoin has been embraced by so many. Bitcoin is both a method of payment and it being treated as an investment.

Can one “collect” Bitcoins? While they are obviously not physical, if one were to have started collecting Bitcoins on January 1, 2014, they would be in wildly profitable position today. On that day, Bitcoin was trading at $778. The following January it was down to $316. On January 1, 2016, heading into an election year, Bitcoin was $434 per unit. Finally, at the start of this year it was $996. Today, Bitcoin currency sits at $9,870 per coin! While there are countless articles that can be read about the reasons behind the price explosion this year, it is clear a significant amount of money has been spent—or converted—into Bitcoin over the past 11 months. Are these funds that otherwise would have gone into precious metals? The current market cap of Bitcoin is approximately $180 billion. Compare this to the total market cap of gold, which is roughly $7 trillion, about 40 times the total of Bitcoin. This could be some of the explanation behind the low volume and flat performance of precious metals this year. As has happened with gold and silver in the past, there are plenty of pundits predicting outrageous price targets for Bitcoin. While it will not be possible to do for some time, it will be fascinating to compare the performance of Bitcoin to the performance of gold and rare coins.

Back to the original question, it seems the best way for the rare coin market to view Bitcoin would be to see it as a form of payment. No doubt many holders of Bitcoin are looking to take some profits and convert them into other assets. If coin and bullion dealers can set up their systems to accept Bitcoin as a form of payment and market this aggressively it opens another way to sell. While it takes some effort, this could create a whole new “coin to coin” exchange.

I'm not sure why you say they are "obviously not physical". Here are several: https://www.coindesk.com/10-physical-bitcoins-good-bad-ugly/ . Some of them look quite interesting from a numismatic perspective. Maybe there are some opportunities here to be the first collector of physical Bitcoin varieties?