The Whitman Baltimore Expo bourse floor was hot with hundreds of dealers and thousands of attendees even as a nor’easter brought much of the Boston-Washington corridor to a freezing halt. 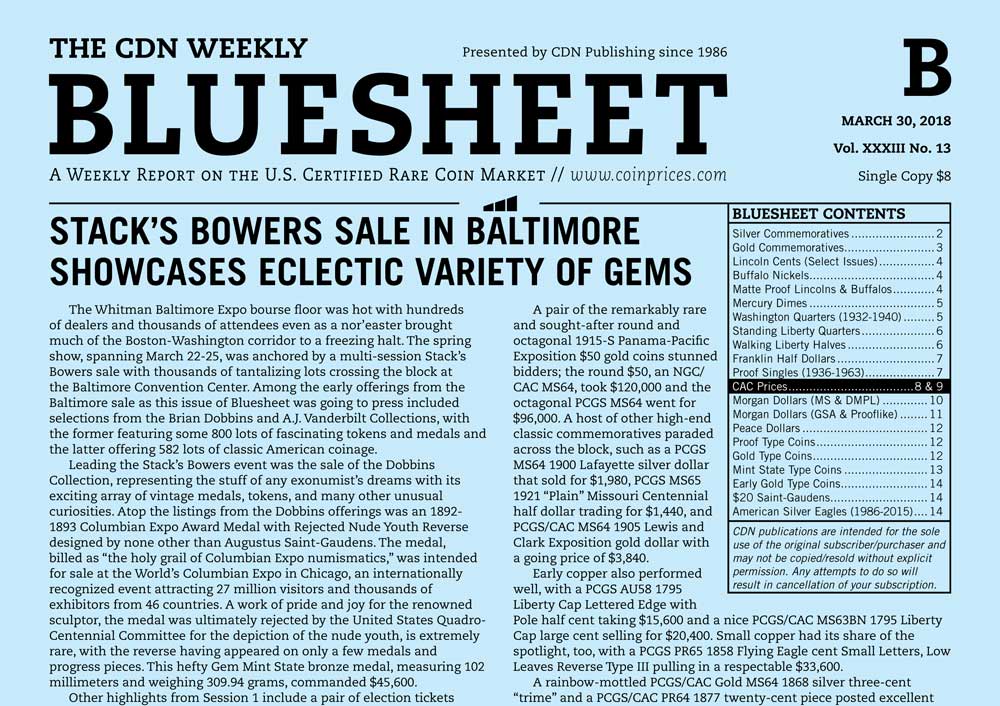 The Whitman Baltimore Expo bourse floor was hot with hundreds of dealers and thousands of attendees even as a nor’easter brought much of the Boston-Washington corridor to a freezing halt. The spring show, spanning March 22-25, was anchored by a multi-session Stack’s Bowers sale with thousands of tantalizing lots crossing the block at the Baltimore Convention Center. Among the early offerings from the Baltimore sale as this issue of Bluesheet was going to press included selections from the Brian Dobbins and A.J. Vanderbilt Collections, with the former featuring some 800 lots of fascinating tokens and medals and the latter offering 582 lots of classic American coinage.

Leading the Stack’s Bowers event was the sale of the Dobbins Collection, representing the stuff of any exonumist’s dreams with its exciting array of vintage medals, tokens, and many other unusual curiosities. Atop the listings from the Dobbins offerings was an 1892- 1893 Columbian Expo Award Medal with Rejected Nude Youth Reverse designed by none other than Augustus Saint-Gaudens. The medal, billed as “the holy grail of Columbian Expo numismatics,” was intended for sale at the World’s Columbian Expo in Chicago, an internationally recognized event attracting 27 million visitors and thousands of exhibitors from 46 countries. A work of pride and joy for the renowned sculptor, the medal was ultimately rejected by the United States Quadro- Centennial Committee for the depiction of the nude youth, is extremely rare, with the reverse having appeared on only a few medals and progress pieces. This hefty Gem Mint State bronze medal, measuring 102 millimeters and weighing 309.94 grams, commanded $45,600.

Other highlights from Session 1 include a pair of election tickets for the 1856 election of James Buchanan and John C. Breckenridge to the presidency and vice presidency, taking $120. Another relic from presidential campaigns of the past was an NGC MS65 Abraham Lincoln “Rail Splitter” medal issued in 1860 for the 16th president’s inauguration, taking $7,800. Fans of President William Henry Harrison could have bought several items from his successful 1840 campaign, such as a group of six brass medalets that drew $216. Hobo nickels saw fervent bidding, including a piece known as “Man with Beard, Hat and Collar” hosted on an AU 1913 Type I Buffalo nickel; this piece, carved by original hobo nickel legend George Washington “Bo” Hughes, hammered for $1,800.00.

Session 2, the sale of the Vanderbilt Collection of U.S. Coins, presented a multitude of high-end certified specimens from many classic series, including a scintillating sampling of early gold issues. A PCGS/CAC MS62 1795 Capped Bust Right Heraldic Eagle Reverse half eagle traded hands for astounding $180,000, serving as the high-water mark for the second day of action. Following closely behind was a PCGS MS62 1795 Capped Bust Right Small Eagle half eagle, which sold for $132,000.