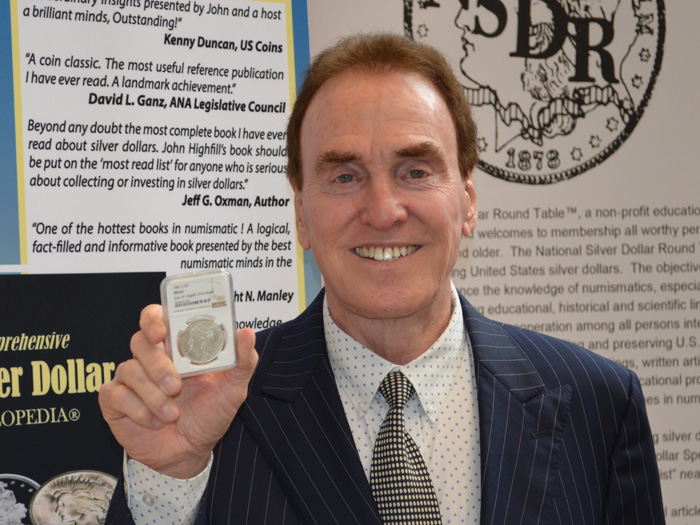 "The award, which was first presented at the 2019 Central States convention, is designed to recognize the unselfish devotion, scholarly contributions and investments of time and resources made by a numismatic professional to the hobby. John Highfill checks all of those boxes," said CSNS President Mitch Ernst.

“I want to thank the Central States Numismatic Society for honoring me with this award,” said Highfill.

“Throughout my long career, I have always been aware of the need to ‘give back’ and to help advance the hobby whether I was writing to educate, sitting on organizations’ boards, hosting coins shows or being the founder of the National Silver Dollar Roundtable. I have always treasured the relationship and friends I have made in my 40-plus years in the numismatic community. Central States recognizes the significant contributions of all dealers, which often goes unnoticed, and CSNS is appreciated for their efforts to promote the hobby. I am both humbled and honored,” stated Highfill.

A member of more than two dozen local, regional and national numismatic organizations including the Professional Numismatists Guild ( www.PNGdealers.org), Highfill has served on the American Numismatic Association ( www.money.org) Board of Governors and was a founding member of the Industry Council for Tangible Assets, now known as the National Coin & Bullion Association ( www.ICTAonline.org).

After service in the United States Air Force, Highfill was a record promoter, working with such well-known entertainers as Elvis Presley, Karen Carpenter and Kenny Rogers. He was promoted to Vice President of ABC Records soon after protecting a young Donny Osmond from thousands of exuberant fans at a planned appearance in Las Vegas.

In addition to coins, Highfill also successfully dealt over the years in Beanie Babies® and Pokémon© collectibles.

For additional information about the Central States Numismatic Society and its annual convention conducted in the Chicago suburb of Schaumburg, Illinois each April, visit www.CentralStatesNumismaticSociety.org .