Collecting Walkers in Very Fine condition can be both rewarding and challenging while affordable. 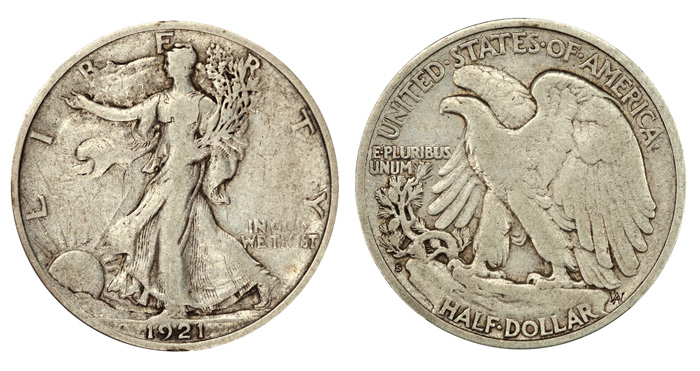 For prices that are much lower than the prices of corresponding AU to Uncirculated grade coins, a set of Walking Liberty half dollars (1916-47) in Very Fine grades may be assembled. VF grade Walkers are often attractive and present the design well.

I suggest searching for VF20 to VF30 grade Walkers that have pleasant natural toning and minimal contact marks. Among half dollars of the same date, I would usually rather own a natural gray and russet VF20 grade Walker than an AU50 grade Walker that has obviously been dipped white by way of an acidic solution.

Of course, some VF grade Walkers have problems or have been dipped, too. I recommend taking the time to find naturally toned coins with minimal imperfections and being willing to pay full retail prices for coins that are particularly appealing.

Fortunately, many pleasant Walkers of all dates survive. These can be cherished by collectors for generations to come.

Walking Liberty half dollars and also Mercury dimes were designed by A. Alexander Weinman. He is also responsible for several, widely recognized medals, notably for the Louisiana Purchase Exposition, the American Institute of Architects and the American Numismatic Society.

According to the website of the Smithsonian Institution, Weinman was awarded “important sculptural commissions, including the monument to General Alexander Macomb in Detroit; the Post Office Department Building, Washington, D. C.; and Pennsylvania Station, New York” (https://americanart.si.edu/artist/adolph-weinman-5300). Other websites depict his large, outdoor sculptures that were placed at train stations, in parks, and in front of private structures, in various parts of the United States.

Weinman was born in 1870 and he died in 1952. From 1895 or 1896 to 1898 or so, Weinman was an assistant to Augustus Saint-Gaudens, the greatest sculptor in the history of the U.S. and the designer of a famous series of double eagles ($20 gold coins). Saint-Gaudens departed for Europe in 1898, and Weinman focused on his career in the U.S. Later, Weinman collaborated with Saint-Gaudens in the design of a medal commemorating the inauguration of President Theodore Roosevelt. Also, Weinman’s famous and very appealing “Descending Night” sculpture (circa 1915) was very likely to have been inspired by works of Saint-Gaudens.

A collector could appreciate Weinman’s design and Walking Liberty half dollars in general by assembling a set of late dates, 1941–47, or just modern Walkers, 1934–47. While these are low cost options, I recommend against traveling down either the modern avenue or the avenue of late dates. One reason to buy coins is to become part of, or at least touch upon, the culture of coin collecting. It is often satisfying to form a collection that knowledgeable collectors find or would find to be meaningful.

Most post-1933 Walkers are inexpensive because they are extremely common; hundreds of thousands are around. A Good-4 grade representative of a scarce early date has more numismatic significance. During the history of coin collecting, knowledgeable buyers have tended towards coins that are scarce, not those that are extremely common.

The 1921-S is a key date that is much scarcer than all other Walkers except the 1921-D. In all grades, including certified and raw coins, there are fewer than ten thousand 1921-S Walkers around, possibly much fewer. Many surviving 1921-S Walkers grade from Fair-02 to VG8, if gradable at all. In contrast, there may be more than 350,000 1941 Walkers in existence, most of which grade below MS64. It is not cost effective for sub-64 1941 Walkers to be certified. 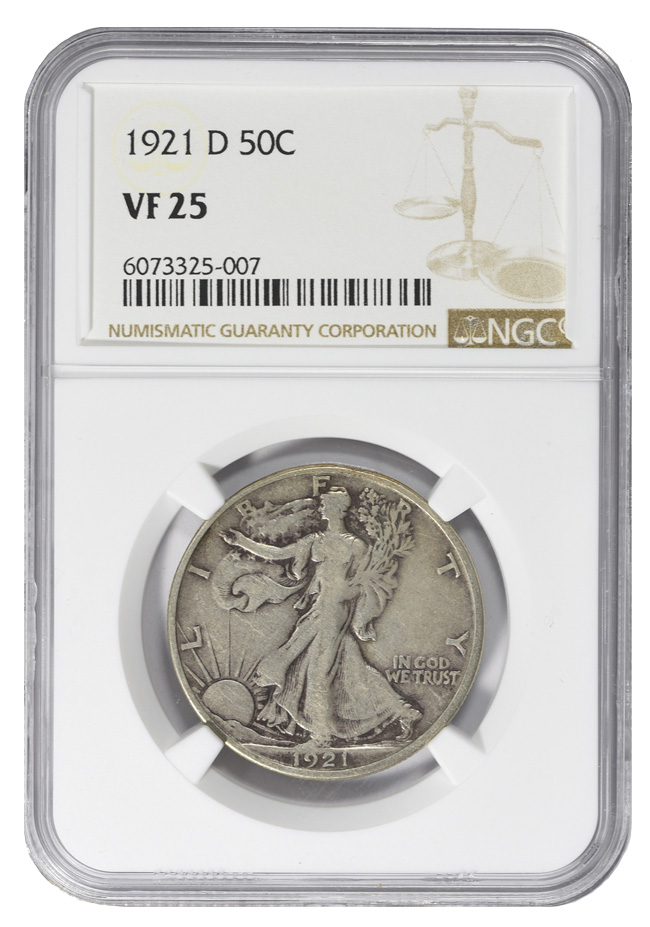 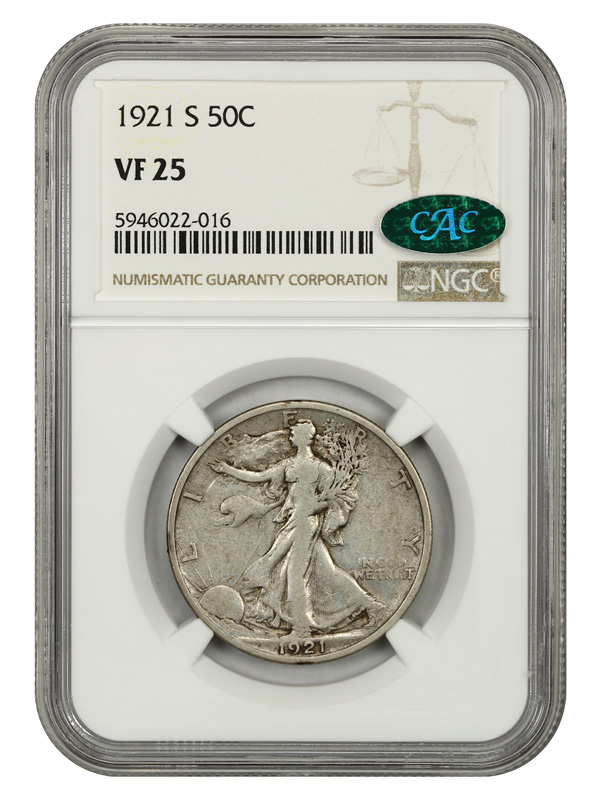 If grading fees did not amount to a substantial percentage of the market value of a 1941 Walker, thousands more 1941 Walkers would probably be certified as MS64. There was a time when the cost of having a MS64 grade common date Walker certified was a much lower percentage of its wholesale value.

In the Certified Coin Dealer Newsletter (a former CDN-Greysheet publication) of March 16, 1990, the sight-unseen bid level for an NGC or PCGS graded MS64 1941 Walker was $100. I believe that grading fees were then lower. It is certain that postage, handling and shipping-insurance costs were lower in 1990 than such costs are in 2021. Dealers were then far more likely to submit presumed MS64 grade, raw Walkers to NGC or PCGS. Many Walkers, though, have surfaced over the past thirty years. An immediate point is that late date Walkers are even more common than population data suggests.

In circulated grades, late date (1941–47) Walkers may be purchased for not much more than bullion value. As of Oct. 12, 2021, Greysheet Bid for a VF20 1941 Walker was $8.63. Greysheet Bids for VF30 to XF40 grade 1941, 1942 or 1943 Walkers were between $9 and $10. Retail prices are higher. Collectors, however, who attend small to medium size coin shows may be able to find and purchase VF grade, common date Walkers for just a little more than prevailing Greysheet Bid levels.

Given the reality that mint state grade 1923-S halves cost thousands of dollars, it is sensible for some cost conscious Walker enthusiasts to pay around $200 for a nice VF20 grade 1923-S. These are scarce.

Demand for coins for circulation fell dramatically and mintages dropped in 1921 because there was a severe economic downturn in 1920 and 1921. The 1921-D and the 1921-S are relatively scarce and expensive.

In VF20 or VF25 grade, the 1921-D is the most expensive Walking Liberty half dollar. For coins that grade above VF30, the 1921-S becomes significantly more expensive. 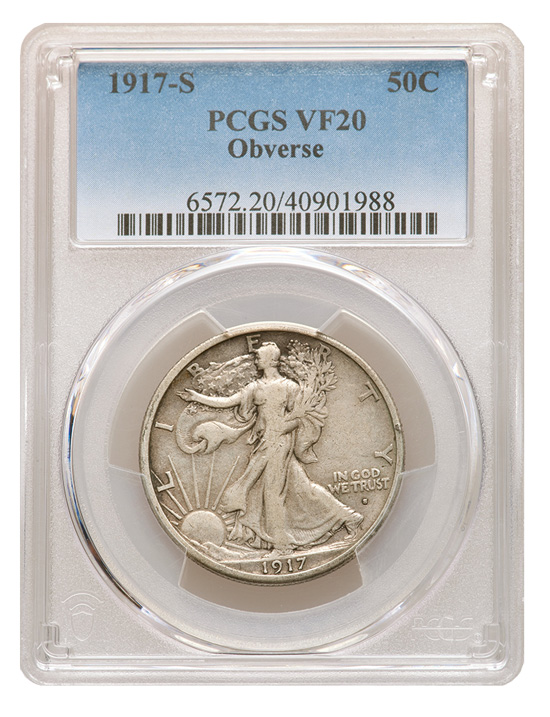 Some interested collectors are unaware that the 1921 Philadelphia Mint issue is a key date, too. For Walkers, there are three key dates from one year, 1921, 1921-D and 1921-S. As an aside, I note that the presence of three key dates from one year illustrates the point that the term ‘date’ in coin collecting often refers to a combination of a year and a mint location in the framework of a particular design type or denomination; the term ‘date’ does not just refer to the numerals of the year. In this context, a mintmark or lack of one is part of the date.

In response to my inquiry, pre-eminent historian R. W. Julian states that on “April 13, 1917, Mint Director Raymond T. Baker wrote Philadelphia Mint Superintendent Adam Joyce, ordering the mintmark placement change. Baker noted that he was confirming in writing the verbal order given by the preceding director, F.J.H. von Engelken.” Strangely, it was asserted that “the mintmark as first placed had the appearance of a defect in the die and was entirely too prominent.” 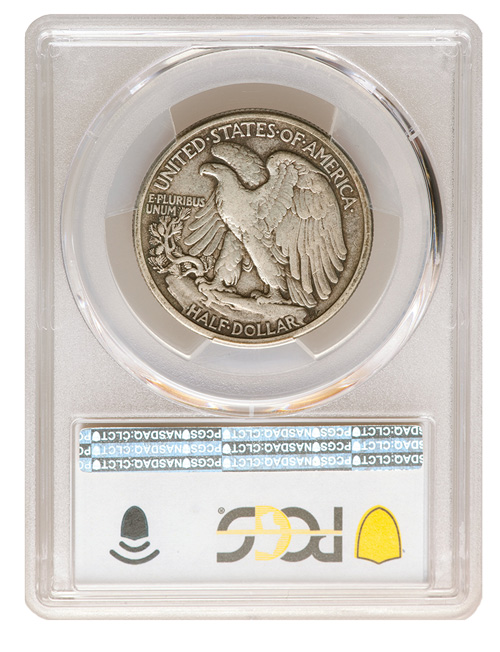 U.S. Mint officials employed questionable reasoning, in my opinion. The obverse mintmarks on Lincoln cents of the same time period did not appear like die defects and were equally “prominent.”

There are 1917-D Obverse, 1917-D Reverse, 1917-S Obverse and 1917-S Reverse Walkers. Given the importance of mintmarks in the culture of coin collecting, these are four different dates. Indeed, this distinction is obvious without magnification and relates to determining the coins needed to complete a set by date!

Of these four, the 1917-S Obverse tends to cost more than twice as much as any of the other dates from this year, for coins of equivalent quality and eye appeal. On January 12, 2021, Heritage sold a PCGS graded VF20 1917-S with the mintmark on the obverse for $288.

A 1917 Philadelphia Mint Walker may be an excellent selection for a type set, as Greysheet Bid in VF20 grade is just $18. Even if a collector had to pay $26, this is a small fraction of the cost of each of other early Walkers in VF20 grade.

Generally, a set of Walkers in VF20 to VF30 grades is much less costly than a higher grade set. If technically impressive coins with attractive natural toning are selected, a finished set is likely to be exceptionally pleasing and really a pleasure to behold.

Subscribe to December 2021 edition of Monthly Greysheet for the industry's most respected pricing and to read more articles just like this.