A set of XF-AU Indian cents costs just a fraction of the amount that would need to be spent to complete a set of higher grade coins, and can be an equally satisfying endeavor. 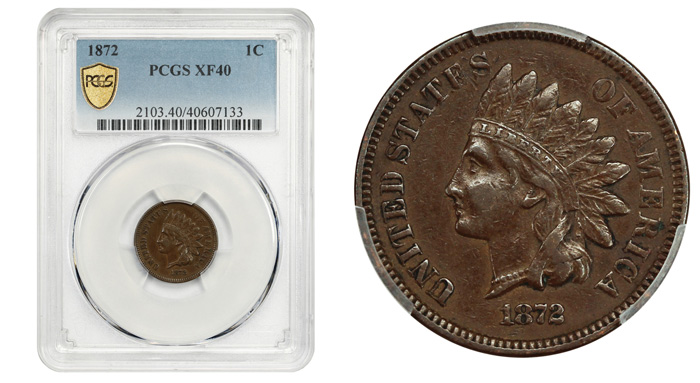 The MS65 to MS67 grade Indian cents that are PCGS or NGC certified as having full red (RD) color make the news and bring lots of money at auctions. Some collectors forget that it is easy and inexpensive to complete a set of Extremely Fine (XF) to About Uncirculated (AU) grade Indian cents. Such a set costs just a fraction of the amount that would need to be spent to complete a set of gem (MS65) or Choice Uncirculated (MS63 to MS64) Indian cents.

Additionally, it is interesting to think about the composition and meaning of Indian cents. Few collectors in the U.S. know that “French Bronze” Indian cents relate to coinage trends in Europe during the second half of the 19th century. XF to AU grade coins are sensible selections for appreciating the color, texture, history and design elements of Indian cents, without spending a fortune.

The fifty coin set cited here includes the 1908-S and the 1909-S. It does not include extra varieties. In other words, the $5,692 total refers to top-wholesale prices for a set of Indian cents by date in which there are not two Philadelphia Mint dates in regards to any one year.

For all dates from 1895 until 1907, Greysheet Bid for an XF40 grade Indian cent is just $5. At many small to medium size coin shows, these probably can be acquired for less than $8 each. It makes sense, though, to pay a premium for Extremely Fine grade Indian cents that have very few contact marks, lack hairlines, and feature neat natural brown color.

Each Copper-Nickel Indian cent (1859–64) was specified to weigh 72 grains (0.1646 ounce). Copper-Nickel cents thus weigh 50% more, though are of the same width. All Indian cents were required to have a diameter of three-fourths of an inch (about nineteen millimeters).

U.S. five cent nickels are usually just 25% nickel in metallic composition, yet their 75% copper content is typically not very noticeable. It is even more puzzling that the 88% copper content of Copper-Nickel Flying Eagle and Indian cents is dominated by the 12% nickel content.

The alloy of post-1864 Indian cents is fairly termed French Bronze. This, though, is a proper name, really a political name, as the concept of bronze is fluid and ambiguous. There never was a precise, widely accepted scientific definition of bronze. As post-1864 Indian cents, Two Cent Pieces (1864–73) and all pre-1943 Lincoln cents are said in standard references to be bronze, it makes sense to think about whether they really are bronze and why they were specified to be 95% copper with the balance being zinc and tin. 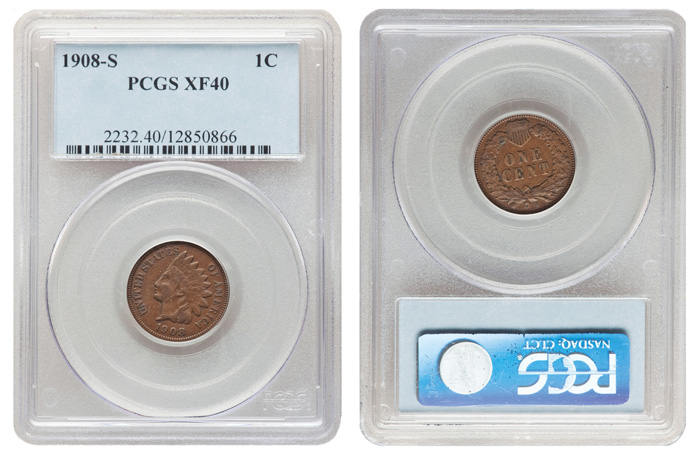 The concept of bronze was vague in terms of the history of human civilization. Historians and archaeologists frequently refer to artifacts that are less than 90% copper and may contain no zinc as bronze. The Encyclopedia Britannica now notes that bronze objects of the past may be anywhere from 67% to 95% copper in composition.

Tony Clayton remarks that bronze coins may contain from 80% to 95% copper. In Clayton’s widely regarded website on the coins of the United Kingdom (Great Britain), Clayton refers to bronze as an alloy of copper and tin with no mention of zinc, though Clayton incorporates zinc in his definition of brass (https://tinyurl.com/ClaytonBronze).

The variety of alloys used during the so-called Bronze Age in history are relevant to my point that the term bronze is very ambiguous and that 95% copper Indian cents should be named, “French Bronze Indian Cents,” with capital letters, rather than listed as being bronze in some implied scientific sense. Currently, the Wikipedia defines bronze as “an alloy consisting primarily of copper, commonly with about 12–12.5% tin and often with the addition of other metals, such as aluminum, manganese, nickel or zinc, and sometimes non-metals or metalloids such as arsenic, phosphorus or silicon.” In regards to bronze, the Wikipedia cites two leading reference works of the 19th century. Many scientists in the 19th century would not have thought of Indian cents as being bronze.

Diffen.com now defines bronze as a “metal alloy consisting primarily of copper, usually with tin as the main additive, but sometimes with other elements such as phosphorus, manganese, aluminum, or silicon” (https://tinyurl.com/DiffenBronze). There is no mention of zinc in the definition of bronze on Diffen.com, yet all post-1864 Indian cents were specified to contain at least some zinc. It would not make sense to refer to post-1864 Indian cents as being bronze without an explanation.

U.S. Indian cents, minted after some point in 1864, consist of French Bronze or a fair approximation of French Bronze, which is more of an historical concept than a scientific formula. Indeed, the term French Bronze relates to coinage in Europe during the second half of the 19th century, and not to science. There was then a trend throughout much of Europe to mint low denomination coins in an alloy of 95% copper, 4% tin and 1% zinc.

This alloy was adopted by France in 1852 for a series of low denomination coins that were minted under Napoleon III, who reigned from 1852 to 1870. During the 1850s, one centime, two centimes, five centimes and ten centimes coins in French Bronze were minted in France and depict Napoleon III. During the 1870s, a new set of French Bronze coins of these same denominations was introduced, though the later French Bronze coins depicted conceptual motifs relating to the French Republic.

In 1860, the metallic composition of the copper denominations in British coinage was changed to French Bronze, this same 95% copper, 4% tin, 1% zinc alloy. The French and the British were thus using the same alloy for low denomination coinage during most of the second half of the 19th century.

The use of the alloy known as French Bronze in multiple European countries relates to political trends of the time period. The Latin Monetary Union was founded in 1867 and the Scandinavian Monetary Union was founded in 1873 with the idea of standardizing coinage. Although the primary point of these unions was to set standards for silver and gold coins, there were many politicians in Europe who favored or were sympathetic towards the idea of establishing international standards for coinage overall and the use of French Bronze in multiple countries was pertinent to this political trend.

Many European countries, including Spain, Denmark, Sweden and Finland, employed this French Bronze alloy during the second half of the 19th century, as did other countries around the world including Argentina, Japan and Siam (Thailand). In March 1877, a law was passed in the Netherlands that required copper coins to be replaced by coins minted in this 95% copper, 4% tin 1% zinc alloy.

Whether France was the first to employ this 95% copper, 4% tin, 1% zinc alloy for coinage, I do not know. During the 1860s, however, France was the driving force behind the idea of an international standard for coinage, which never fully materialized. To understand the alloy of post-1864 Indian cents, there is a need to think about political trends regarding coinage around the world during the second half of the 19th century.

Except for key dates and a few semi-keys, it is rare for coin doctors to artificially tone XF grade Indian cents. Many, though, have been cleaned such that they are characterized by some artificial redness, tan tints or pink hues. Through experience, collectors may learn to identify natural colors.

Examples of some public sales are listed so that collectors get an idea of availability and market levels. There is not here a recommendation for or against any specific coin. I suggest that collectors first buy relatively inexpensive Indian cents and study them. Collectors usually learn while they are collecting.

The 1871 and the 1872 are semi-keys and relatively rare dates. There are varieties that are even more expensive than these semi-keys, though they are not needed for a set by date. 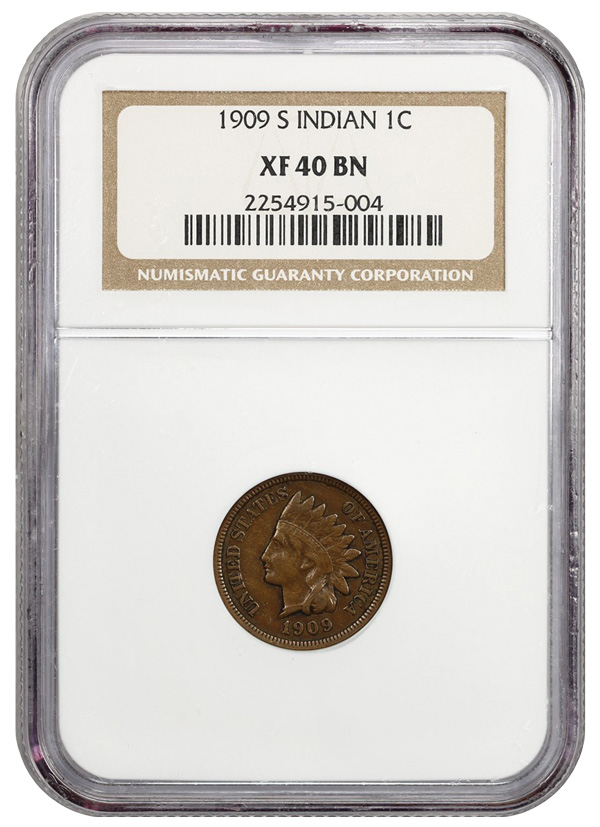 In order for there to be two dates of the same year, design type and denomination, the second date must have important distinguishing characteristics that are readily apparent without magnification. It must be something really different from the first date of that same year, denomination and design type. A 1918/7-S Standing Liberty quarter is a date that is different from a 1918-S Standing Liberty quarter; the overdate is blatant and extremely noticeable.

In the realm of Indian cents, there just are not varieties that need to be collected as if they are additional dates. The overdates and repunched dates in the series require high-magnification to even notice and they are minor anomalies. The designer’s initial ‘L’ is barely noticeable on some 1864 Indian cents and is a very small presence on all subsequent Indian cents anyway.

The 1873 Open 3 and Close 3 varieties are not that much different and are not two different dates of the year 1873. The 1873 Doubled Liberty variety is fascinating and entertaining, though is certainly not required for a complete set by date.

A set of French Bronze Indian cents by date requires just fifty coins and is fairly easy to assemble. A set of carefully selected, XF grade Flying Eagle, Indian and Lincoln cents, dating from 1857 to 1934, would be very inexpensive in the framework of classic U.S. coins and would be a really neat collecting accomplishment.

Subscribe to November 2021 edition of Monthly Greysheet for the industry's most respected pricing and to read more articles just like this.

Very informative and interesting. But I think many of us just don't have the kind of money that would require. Also, and I'm a real beginner here, but how do you suggest storing and displaying the collection? Would you suggest one of the albums, and if so which? Maybe that would be an interesting article, which of the best albums to display collections by type, date, etc.