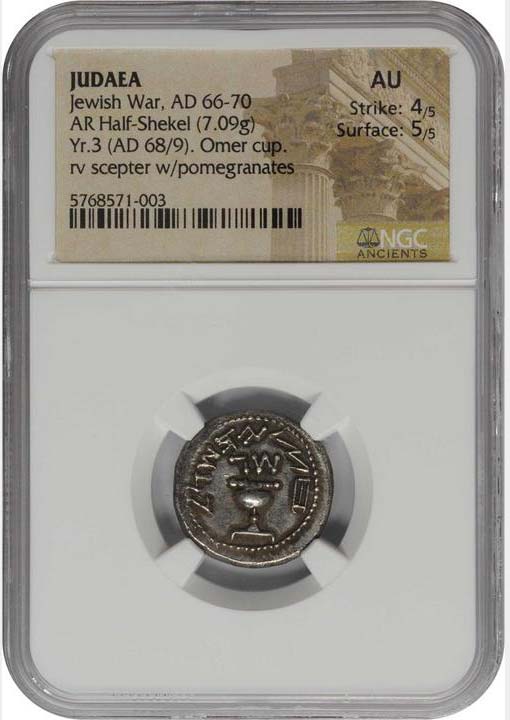 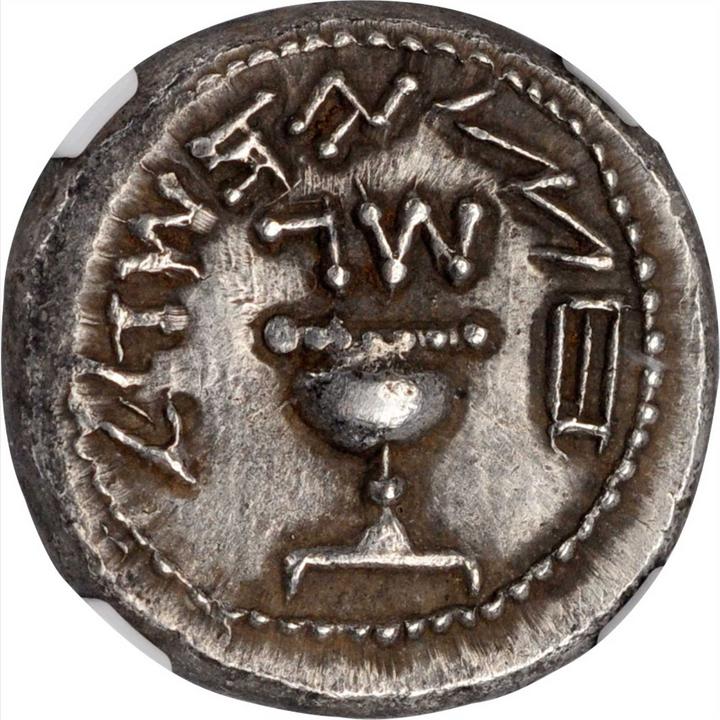 Santa Ana, CA – Legendary auction house Stack’s Bowers Galleries is pleased to present their annual August Ancient and World auction, featuring over 3,000 lots of coins, medals, and paper money. Scheduled to take place at the Bellagio Casino in Las Vegas, Nevada, this rich offering of material will comprise three live sessions August 5 and 6, with three additional online sessions August 10 through 12. During this challenging time, the firm is proud to offer another impressive array of numismatic treasures through their award-winning website that makes accessing the entire sale and participating easy.

Among ancient coins, nearly 500 lots represent the most expansive and captivating offering in a number of years, featuring numerous rare and interesting type coins. A stunning gold Stater from the time of Kroisos ( lot 20059 )—nearly 2,600 years old and still offering incredible brilliance—highlights the Greek section, along with an exceptional silver 1/2 Shekel from Year 3 of the First Jewish War ( lot 20067 ) and an early Syracusan silver Tetradrachm from the Gameroi ( lot 20025 ).

Among the coins of Rome, there are great examples for numerous emperors and imperial figures, as well as some from before the creation of the empire itself. A portrait Denarius of the deified Julius Caesar ( lot 20094 ) presents great detail of the slain dictator, while later imperial issues, like a gold Aureus of Maximian ( lot 20146 ) and a Solidus of Majorian ( lot 20151 ) will appeal to advanced collectors of Roman gold.

Rounding out the late Roman/Byzantine period is the Glacier Rams Solidi Collection —a carefully cultivated group of 29 gold solidi marking the shift of power away from pagan Rome and toward Christian Constantinople. These exceptional gold issues span the 4th through 9th centuries and offer great quality and brilliance.

Within the World sections, numerous specialized collections are led by the Duke of Lansing Collection —a thoughtfully and painstakingly assembled collection of British coronation medals reaching back to the beginning of the House of Stuart in 1603 with James I and extending all the way to the current sovereign, Elizabeth II, in 1953. Particular standouts are a magnificently choice gold medal of Victoria’s golden jubilee ( lot 21285 ) along with exceptional gold coronation medals of James II ( lot 21273 ) and his successors, William & Mary ( lot 21275 ). Even the abdication of Edward VIII ( lot 21300 ) is featured, as this cabinet also comprises medals portraying pivotal moments within the British monarchy, not just coronations.

The Habsburg Collection offers over 70 lots of crown-sized denominations and a few of their minors, mostly emanating from the 16th and 17th centuries and from mints around the Holy Roman Empire. Similarly, the Jasmine Collection features over 50 lots exploring the various historic states of Italy as well as issues from the Italian kingdom. With many of these pieces being the finest or among the finest certified, this collection is a must for the advanced collector of fine Italian coinage.

Individual rarities are also abundant in the Stack’s Bowers Galleries August 2020 sale, with two “Royal” Presentation Escudo-denominated issues—an 8 Escudos ( lot 21445 ) and a 4 Escudos ( lot 21446 )—leading the way. These incredibly rare specimens, hailing from the renowned D. Brent Pogue Collection, were finely executed and carefully produced, before traveling from the New World to be presented in Spain. Also among the coins of Spain is an extremely rare Double Principats of Charles I and Joanna ( lot 21581 ) and a unique Double Ducado of Charles I ( lot 21580 ) that offers a lengthy pedigree reaching back to 1867! 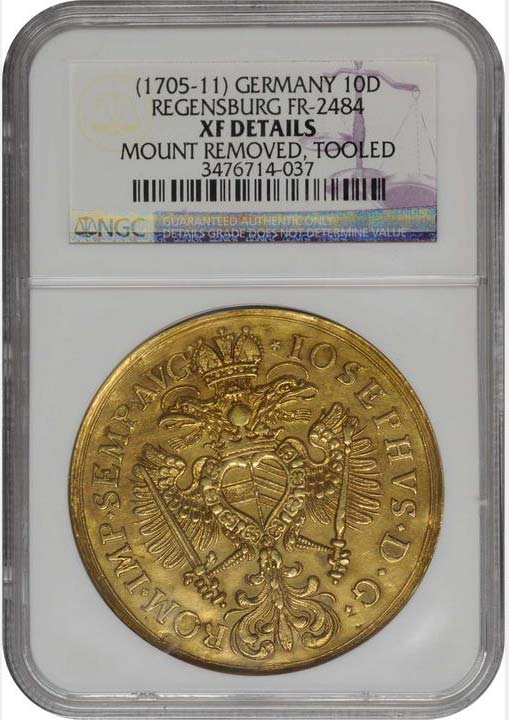 The German States section presents numerous gold rarities, such as a high relief 3 Ducats from Ernestine Saxony ( lot 21249 ) and a very rare 10 Ducats from Imperial Regensburg ( lot 21244 ). Highlights in the area of Silesia include a mid-16th century 2 Ducats ( lot 21252 ) and a 1666 5 Ducats ( lot 21251 ), an extremely rare two-year type coin that seemingly never appears in the market.

Other standouts include a Gold Medallic 2 Ducats of Princess Isabella Czartoryska of Poland ( lot 21538 ), that features an elegant bust of this legendary beauty. A classic 19 th century Japanese issue from year 3 (1870) of the Meiji emperor ( lot 21420 ) pairs iconic dragon imagery with a near Gem designation. Further highlights from Italy feature a lovely and extremely rare gold 2 Scudi of Charles I of Spain (Charles V of the Holy Roman Empire; lot 21370 ) that features the famed European monarch, this time on a Milanese issue. A highly sought after 20th century crown—a 1901 5 Lire of Vittorio Emanuele III ( lot 21417 )—is sure to be on the list all who pursue silver coinages in that particular size.

The Stack’s Bowers Galleries August auction also features fabulous offering of world paper money, highlighted by a pair of Leeward Islands notes offered in consecutive lots ( lots 30215 & 30216 ). These are the first of their kind that the firm has offered and this sale marks the first time in which they have been available in over a decade, as they have been privately held since their last auction appearance. A beautiful St. Lucia note ( lot 30329 ) carries a conservative starting bid of only $18,000. One of the last lots of the sale is a coveted Zanzibar 10 Rupees ( lot 30360 ) featuring the hardest date of the issue, 1916. As Zanzibar notes usually fetch six figures when they bear the rarest date for each denomination, this particular specimen may be rather affordable as it features a very modest low estimate of $40,000.

Lot viewing for the event will be available, by appointment only, at the firm’s Santa Ana California headquarters from July 20-24, at the Grand Hyatt DFW, DFW Airport, Texas from July 31–August 2, and at the Bellagio Hotel in Las Vegas from August 5-7. For more information, visit StacksBowers.com , call 800-458-4646, or email info@stacksbowers.com.

Topping off this amazing numismatic history is the inclusion of the world record for the highest price ever realized at auction for a rare coin, the 1794 Flowing Hair Silver Dollar graded Specimen-66 (PCGS) that realized over $10 million, part of their sale of the famed Cardinal Collection. The company is headquartered in Santa Ana, California, with offices in New York, Tulsa, Wolfeboro, Hong Kong, and Paris. Stack's Bowers Galleries is an Official Auctioneer for several important numismatic conventions, including American Numismatic Association events, the New York International Numismatic Convention, the Whitman Coin & Collectibles Spring, Summer and Winter Expos, and its April and August Hong Kong Auctions.