The 1913 Liberty Head nickel, one of the most famous and valuable of all United States coins, will cross the block at the Stack’s Bowers Galleries auction during the American Numismatic Association (ANA) World’s Fair of Money Show in Philadelphia this August (2018). 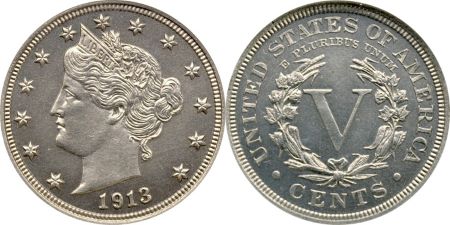 The 1913 Liberty Head nickel, one of the most famous and valuable of all United States coins, will cross the block at the Stack’s Bowers Galleries auction during the American Numismatic Association (ANA) World’s Fair of Money Show in Philadelphia this August. There are only five known specimens of the 1913 Liberty nickel, and the one that is slated for sale this summer is the finest known specimen and arguably one of the most historically significant examples of this ultra-rarity.

This PR66 specimen graded by Professional Coin Grading Service (PCGS) is pedigreed to Boston collector Dr. William Morton-Smith and 20th-century numismatic legend Louis Eliasberg, the latter of whom is credited with having built the only complete United States coin collection. After Eliasberg’s passing in 1976, his massive coin collection was auctioned in a series of three headlining sales that spanned from 1982 through 1997. When the Eliasberg 1913 nickel was sold in the second sale, which took place in 1996, the coin became the first ever to cross the million-dollar mark to the tune of $1,485,000. For perspective on how much the prices of such trophy coins have grown since the mid 1990s, more than 50 coins have since exceeded that lofty amount in public auction.

According to PCGS, the George O. Walton specimen sold in April 2013 for $3,172,500. Another example owned by collector Fred Olsen and later numismatist Edwin Hydeman and thus widely known as the Olsen-Hydeman specimen took $3,290,000 in January 2014. Meanwhile, the Morton-Smith/Eliasberg 1913 nickel last sold for $5 million in spring 2007. Having been off the market for more than a decade, this particular 1913 nickel is certain to enjoy a lot of attention, especially as it is the finest-known specimen available and boasts legendary provenance.

Details about this 1913 nickel and whether it will be on display at the ANA World’s Fair of Money Show are forthcoming. But one thing is for certain – all eyes will be on that 1913 Liberty nickel once it enters the stage in the city famously known as “The Cradle of Liberty.”

Could this be the 1st ever coin to break the $10 million mark?