A coin that is at the zenith of British numismatics, is being offered in a European auction this month. Certified by Numismatic Guaranty Corporation® (NGC®), the Great Britain 1839 Five Pounds shares the spotlight with several other NGC-graded British gold ultra-rarities. 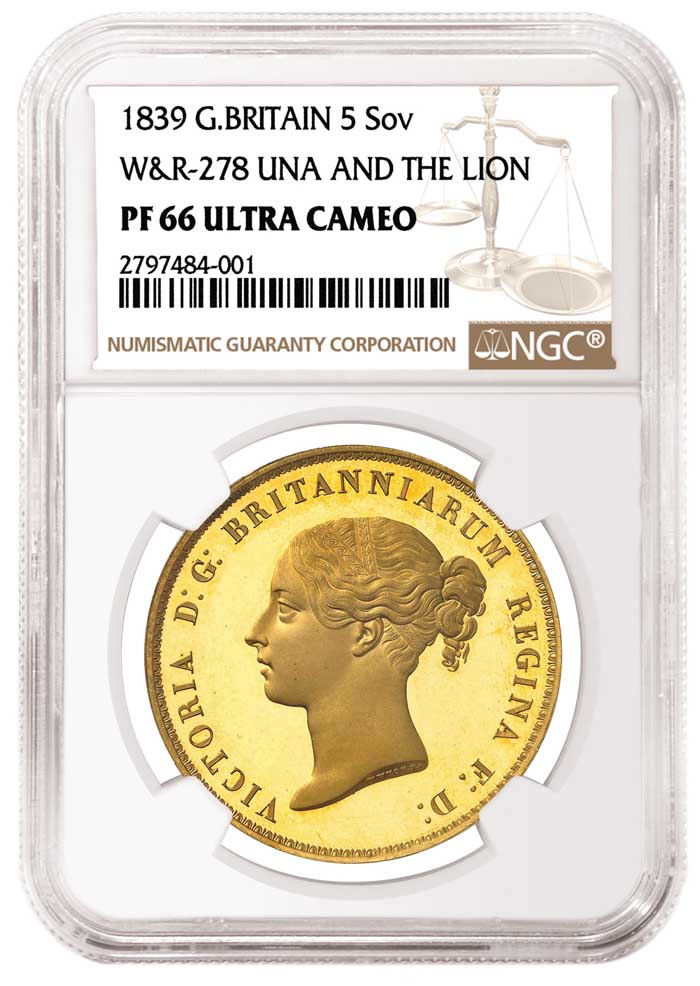 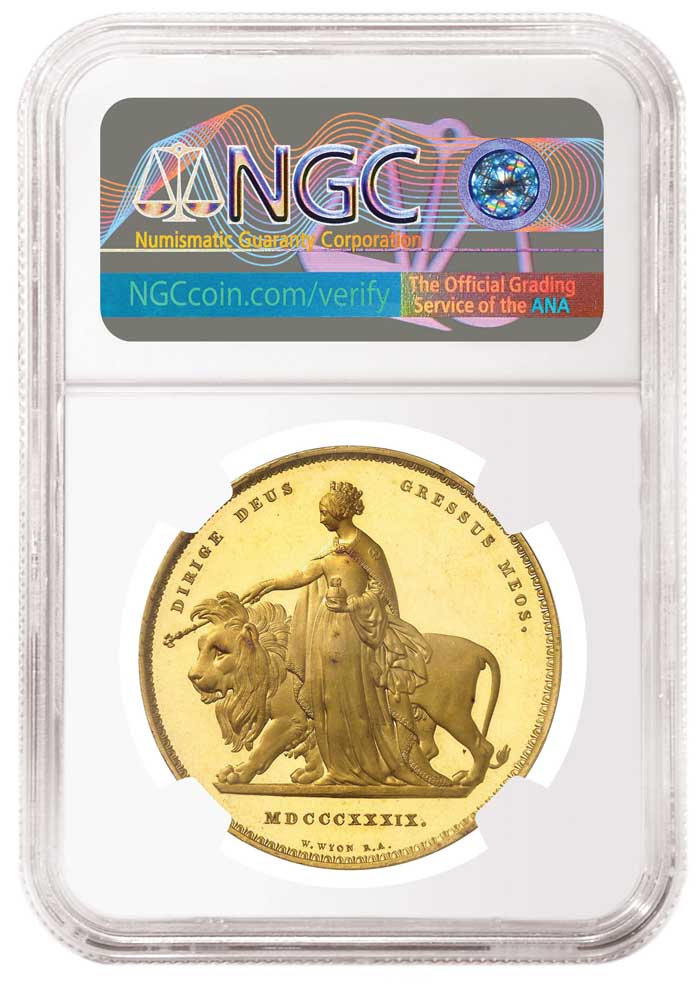 The reverse side of the amazing Una and the Lion 5 pound gold coin minted in 1839. (Images courtesy of NGC.)

SARASOTA, Fla. (October 12, 2020) — The finest-graded example of the "Una and the Lion," a coin that is at the zenith of British numismatics, is being offered in a European auction this month. Certified by Numismatic Guaranty Corporation® (NGC®), the Great Britain 1839 Five Pounds shares the spotlight with several other NGC-graded British gold ultra-rarities in an MDC Monaco auction on October 29, 2020.

Graded NGC PF 66 Ultra Cameo, this Una and the Lion stands out among the survivors of an original mintage of about 400 pieces. Widely regarded as the most beautiful of any British coin, the design celebrates Victoria, who became Queen of England in 1837 at the age of 18. Her 63-year reign is one of the longest by any monarch.

The coin's obverse features a bust of the young queen, framed by the legend VICTORIA D: G: BRITANNIARUM REGINA F: D:, which is Latin for “Victoria by the Grace of God, Queen of the British territories, Defender of the Faith.”

The more famous reverse also features Victoria, this time as Lady Una, a character from Edmund Spenser’s 1590 poem "The Faerie Queene." She is pictured guiding a lion (a symbol of England). The fabled scene is surrounded by the Latin motto DIRIGE DEUS GRESSUS MEOS, which translates to “May the Lord direct my steps.”

Meanwhile, the MDC Monaco sale features a second coin with a starting price of € 500,000: an 1831 Gold Crown graded NGC PF 66★ Ultra Cameo . The 1831 Gold Crown is extremely rare and this example is by far the finest known. NGC recognized its incredible eye appeal by including its trademark Star (★) Designation as part of its grade. 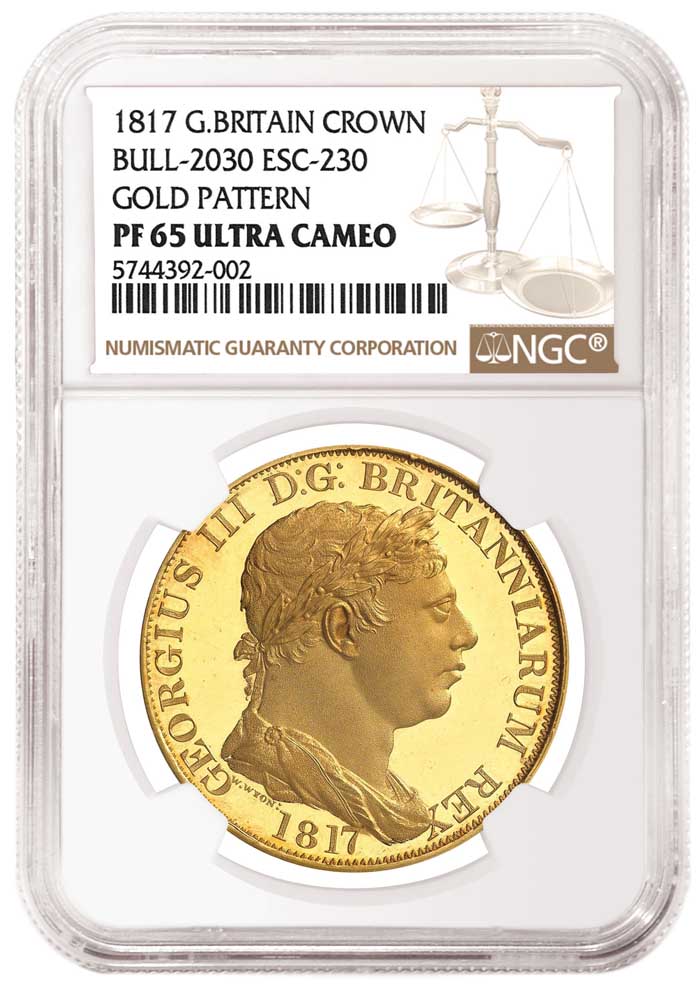 It is the work of engraver William Wyon, best known for his venerated "Una and the Lion" design over two decades later. Wyon's 1817 reverse for the Crown was considered for Britain's new Sovereign coin; however, it lost to Benedetto Pistrucci's timeless Saint George and the Dragon design, which is still in use today.

A British coin struck in Bombay (today known as Mumbai) is also expected to generate lively bidding. The coin, a Great Britain 1896B Gold Trade Dollar graded NGC PF 64 , is one of the few known of any year struck in gold and possibly unique for its particular year. It has a starting price in the auction of € 300,000.

Silver British Trade Dollars were minted starting in 1895 to facilitate commerce in the British colonies of Hong Kong and the Straits Settlements (which included modern-day Singapore). As a result, their reverse contains Chinese characters and Malay script.

At a time when British gold coins are inspiring zealous bidding in auctions around the world, the MDC Monaco sale features yet another spectacular numismatic treasure: an 1826 Five Pounds graded NGC PF 66★ Ultra Cameo . It is the highest-graded of several dozen in the NGC Census and has a starting price of € 200,000 (about $235,000 USD).

"This highly anticipated MDC Monaco sale is one of the most-impressive offerings of British ultra-rarities in years," said Mark Salzberg, NGC Chairman and Grading Finalizer. "Given the current interest in British gold coins and the high NGC grades that distinguish many of these examples, I think we will see many record-setting prices."

"We are proud to offer these incredible numismatic selections from Britain and around the world," said Nicolas Gimbert, MDC Monaco Numismatic Expert. "NGC certification helps bidders feel more confident, which is especially important when an ultra-rare coin represents a once-in-a-lifetime opportunity."

Other NGC-certified coins in the MDC Monaco sale include:

All starting prices are provided by the auction house.

NGC is the world’s largest and most trusted third-party grading service for coins, tokens and medals, with more than 47 million collectibles certified. Founded in 1987, NGC provides an accurate, consistent and impartial assessment of authenticity and grade. Every coin that NGC certifies is backed by the comprehensive NGC Guarantee of authenticity and grade, which gives buyers greater confidence. This results in higher prices realized and greater liquidity for NGC-certified coins. To learn more, visit NGCcoin.com or NGCcoin.uk

NGC, NCS, PMG, CGC, CCS, ASG, CAG and CCG are the registered trademarks or unregistered trademarks of Numismatic Guaranty Corporation of America, and/or its related companies in the United States and/or other countries. All other names and marks referenced in this release are the trade names, trademarks, or service marks of their respective