Finest-graded Una and the Lion, Certified by NGC, Realizes a Record $1.44 Million 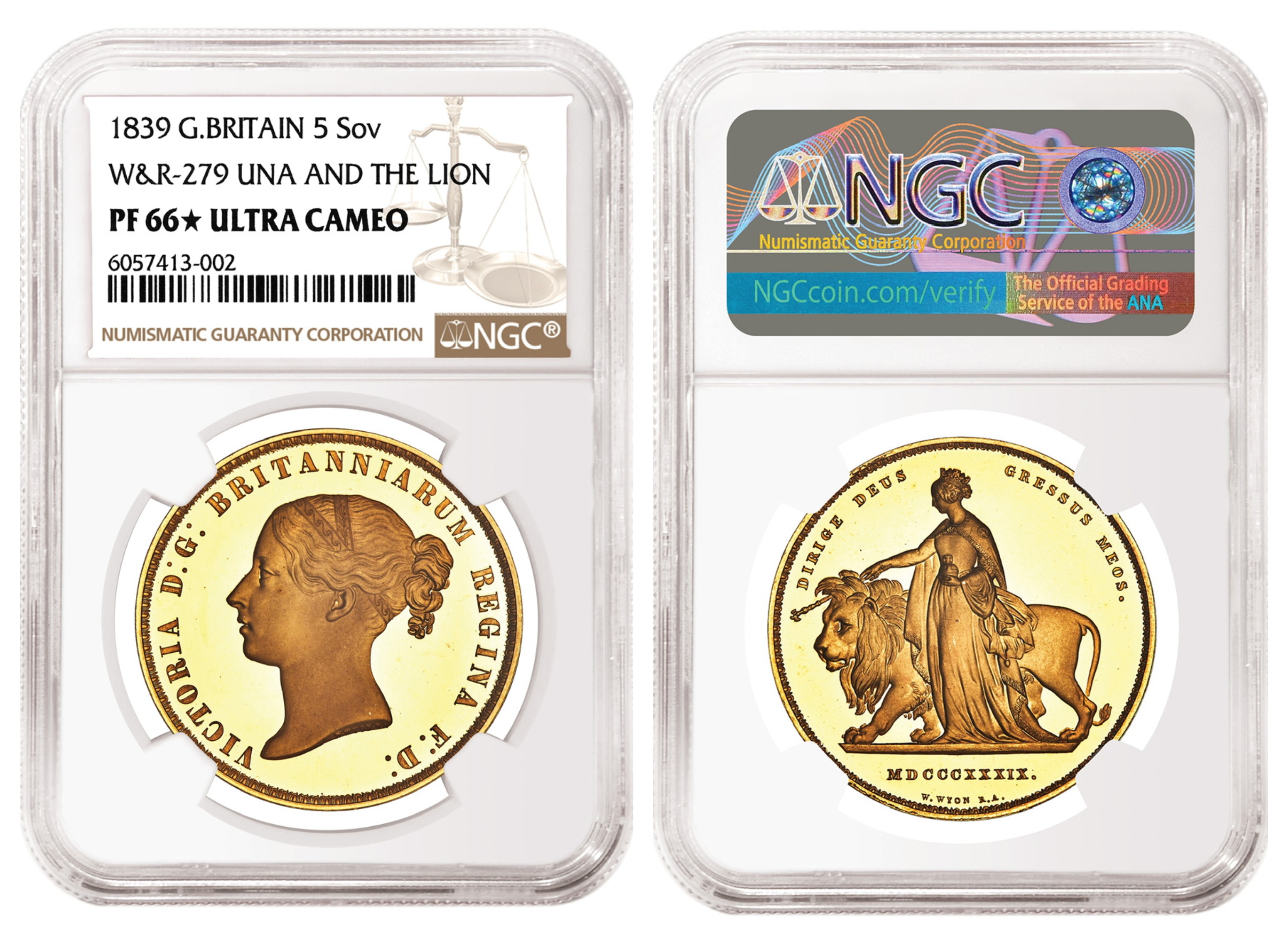 The Una and the Lion 5 Sovereign graded of NGC PF 66★ Ultra Cameo.

The Una and the Lion 5 Sovereign graded of NGC PF 66★ Ultra Cameo.

A Great Britain 1839 "Una and the Lion" 5 Sovereign certified by Numismatic Guaranty Corporation® (NGC®) realized a record $1.44 million at a Heritage Auctions sale.


SARASOTA, Fla. (August 23, 2021) — A Great Britain 1839 "Una and the Lion" 5 Sovereign certified by Numismatic Guaranty Corporation® (NGC®) realized a record $1.44 million at a Heritage Auctions sale. The coin is the 12th certified by NGC to realize at least $1 million at auction this year. Six other NGC-certified world coins also realized prices over $100,000 in the World's Fair of Money World & Ancient Coins Platinum Night Auction, held on August 19, 2021.

The Una and the Lion 5 Sovereign (lot 33227) is the finest-certified, with a grade of NGC PF 66★ Ultra Cameo. Its $1.44 million figure easily exceeded its pre-auction estimate and surpassed the former record of $1.148 million that was set by another NGC-certified Una and the Lion at a sale in Europe in October 2020.

Widely considered to be the most beautiful in British numismatics, the Una and the Lion coinage was issued to celebrate the ascension of the young Queen Victoria to the throne. The design was inspired by Edmund Spenser's 1590 poem "The Faerie Queene." The obverse shows a bust of Queen Victoria, and the reverse depicts her in the character of Lady Una, guiding a lion that represents England.

This example also holds the distinction of earning the NGC trademarked Star (★) Designation in recognition of its exquisite eye appeal.

"It was an honor for NGC to grade one of the most-prized rarities in world numismatics," said Ben Wengel, NGC Senior Grading Finalizer of World Coins. "In a vibrant and expanding market for world coins, clearly the Una and the Lion stands tall and continues to roar."

It is pedigreed to the famous 1715 Treasure Fleet, which was carrying an enormous number of gold and silver coins to Spain when 11 of the 12 ships were lost in a hurricane off the coast of Florida. In addition to "cobs," Spanish Colonial mints produced a small number of round, exactingly struck coins like this one, which were used for presentation to royalty.

Meanwhile, a coin struck for an unfortunate predecessor of Queen Victoria realized $264,000. The 1643 England Triple Unite graded NGC MS 61 (lot 33192) was issued during the English Civil War by King Charles I as part of an ultimately unsuccessful attempt to hold onto power. The king was later convicted of high treason and executed.

Two other top performers in the sale were coins of Brutus, the infamous assassin of Julius Caesar, which each realized $312,000 in the sale. To learn about these and other rarities certified by NGC Ancients in this auction, click here.

"We are proud that this auction generated intense interest among collectors of rare world and ancient coins," said Cris Bierrenbach, Executive Vice President of International Numismatics for Heritage Auctions. "Bidders trust the certification services that NGC offers, which helps these great rarities achieve their full potential."

Seventeen of the top 20 world coins in the sale were NGC-certified; other highlights included:

Prices realized include buyer's premium. All estimates provided by the auction house in US dollars.

NGC is the world’s largest and most trusted third-party grading service for coins, tokens and medals, with more than 50 million collectibles certified. Founded in 1987, NGC provides an accurate, consistent and impartial assessment of authenticity and grade. Every coin that NGC certifies is backed by the comprehensive NGC Guarantee of authenticity and grade, which gives buyers greater confidence. This results in higher prices realized and greater liquidity for NGC-certified coins. To learn more, visit NGCcoin.com.