The finest known ‘NE’ Massachusetts Shilling, which was recently certified by Numismatic Guaranty Company™ (NGC®), is part of a Morton & Eden sale this month. Incredibly, the shilling and other early American rarities — including two 1776 Continental Dollars — were recently discovered in a sweet tin in the United Kingdom. 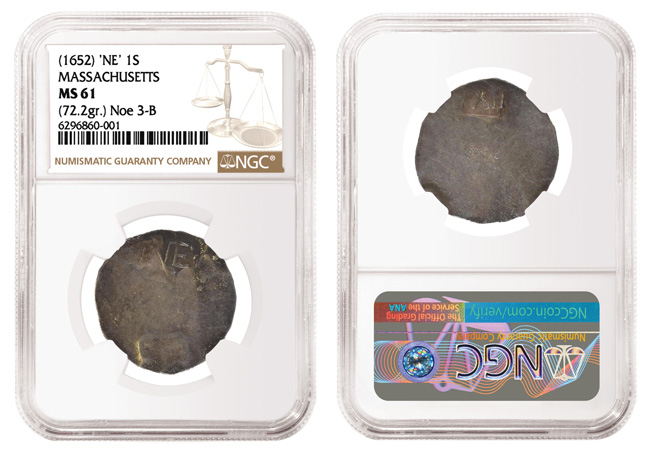 SARASOTA, Fla. (November 22, 2021) — The finest known ‘NE’ Massachusetts Shilling, which was recently certified by Numismatic Guaranty Company™ (NGC®), is part of a Morton & Eden sale this month. Incredibly, the shilling and other early American rarities — including two 1776 Continental Dollars — were recently discovered in a sweet tin in the United Kingdom. Bidding is already underway for Auction 113 , which concludes November 26, 2021.

Massachusetts Bay Colony struck the first coins in British America, initially with a design that included 'NE' (for New England) on the obverse and a Roman numeral on the reverse. In this case, the Shilling bears the number 'XII' to note that it is worth 12 Pence, equal to one shilling. To discourage counterfeiting or clipping, the designs later became more elaborate, including trees as well as legends near the edge.

An art advisor in northern England, whose ancestors include William Wentworth, an early New England settler who established a prominent family, consigned the coin after it was discovered in an assortment of coins that were stored in a small metal container.

“There were several hundred coins in the old sweet tin,” said Morton & Eden Coin Specialist James Morton. "The star of the collection is unquestionably this remarkable New England shilling, the plain appearance of which belies its extraordinary historic significance and outstanding original state of preservation."

The discoveries also include two examples of the 1776 Continental Dollar. These enigmatic coins were struck in various metals, and numismatists cherish them today for their connection to the newly independent United States. They show a sundial and the date 1776 on the obverse and the interlocking names of the American colonies on the reverse. 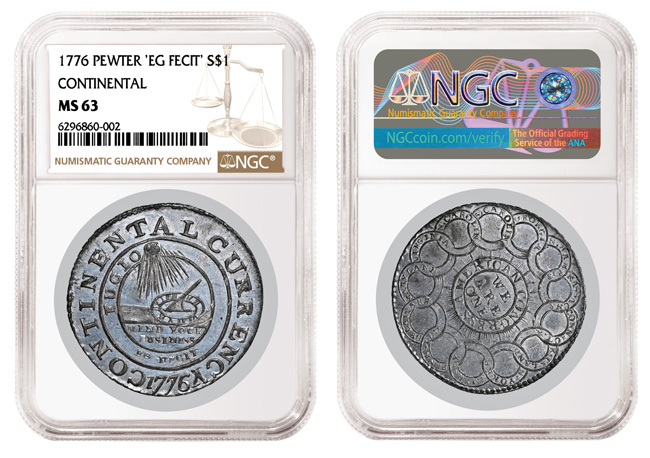 "The field of numismatics never seems to run out of surprises," said Scott Schechter, NGC Chief Numismatist. "Following its certification by NGC's expert grading team, I am certain that the only-known Mint State 'NE' Shilling will have an impressive debut."

The other NGC-certified rarities from the tin are:

All estimates provided by the auction house. All dollar amounts are US Dollars.