Stack’s Bowers Galleries is thrilled to present the finest of three known Proof 1825/4/1 Capped Head Left half eagles in their Summer 2022 Global Showcase Auction, offered as part of the Mocatta Collection of U.S. Gold Rarities. 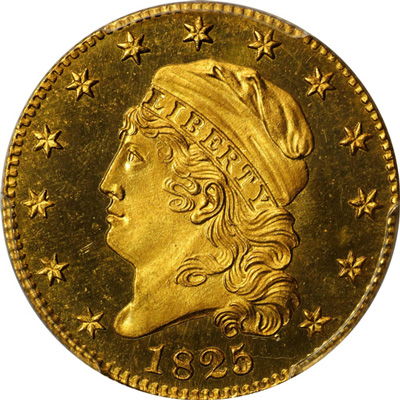 Costa Mesa, CA – Stack’s Bowers Galleries is thrilled to present the finest of three known Proof 1825/4/1 Capped Head Left half eagles in their Summer 2022 Global Showcase Auction, offered as part of the Mocatta Collection of U.S. Gold Rarities. Graded Proof-67 Cameo by PCGS and awarded a CAC sticker for superior quality, it boasts a magnificent provenance stretching back to before 1864 and has been held privately off the market since the early 1970s. It is first traced to the collection of George F. Seavey formed before 1864, which was purchased en bloc by Lorin G. Parmelee in 1873. It appeared in lot 957 of the June 1890 sale of the Parmelee Collection where it sold for $40, or just eight times the face value. Over the next hundred years, this coin passed through a litany of legendary cabinets including those of Waldo Newcomer, Colonel E.H.R. Green, and even Mr. Louis E Eliasberg, Sr., himself. Stack’s had the pleasure of offering this piece twice during this period including their 1944 sale of the Bell Collection and their 1947 H.R. Lee sale—on behalf of Mr. Eliasberg. It was last offered publicly in Sotheby’s 1954 sale of the collection belonging to King Farouk of Egypt. This specimen was acquired for the Mocatta Collection circa 1973 and has been cherished privately since.

Among the three known examples, the Proof-67 Cameo (PCGS) CAC Mocatta specimen is the only one currently in private hands and it ranks as the finest by a clear margin. The other two survivors include the example in the Harry Bass Core Collection (graded Proof-64+, as per John Dannreuther) and another in the National Numismatic Collection at the Smithsonian Institution (graded Proof-66, also per Dannreuther). This rarity was missing from most of the greatest cabinets ever formed including Garrett, Pittman, and Norweb, and it surely represents a monumental offering for the most advanced collectors of Proof and Early Gold coinage.

This Superb Proof half eagle is accompanied by numerous world-class treasures that would each represent a crowning achievement in the most advanced cabinet. The gold dollars are highlighted by an incredible Proof-64 Deep Cameo (PCGS) CAC 1855 which is one of the finest of only about eight known. The iconic 1796 No Stars quarter eagle is represented by a near-Mint AU-58 (PCGS) example which is on the cusp of the Condition Census. The popular three-dollar gold series is highlighted by a lovely Proof-65 Cameo (PCGS) CAC 1876, while the 1879 Flowing Hair $4 Stella is represented by a delightful Gem Proof-65 (PCGS) CAC specimen. 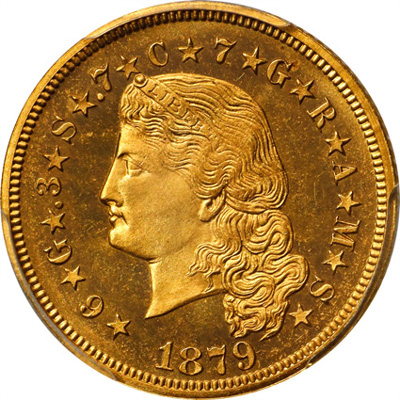 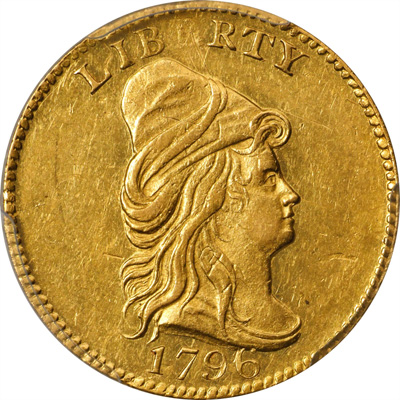 Also included among the half eagles is an astounding MS-62 (PCGS) CAC 1829 Small Size $5, which ranks among the finest of only about 10 knowns. The $10 eagles are marked by rarities across three centuries of production including an AU-55 (PCGS) 1797 Heraldic Eagle $10, a visually appealing Proof-65 Deep Cameo (PCGS) 1864 (just two graded finer), and astounding representatives from both 1907 “pattern” issues including a MS-66 (PCGS) Rolled Rim and a MS-64 (PCGS) CAC Wire Rim. The double eagle denomination is highlighted by two tremendous Proof examples including a Proof-65 Deep Cameo (PCGS) CAC 1887 (only three graded finer) and a Satin Proof-63 (PCGS) 1914 from a mintage of only 70 coins. Pattern enthusiasts will be thrilled by the incredibly rare 1804 Judd-30 Private Restrike $5 graded MS-62 (PCGS) and the 1808 Judd-40 Private Restrike $5 graded MS-63 (PCGS). 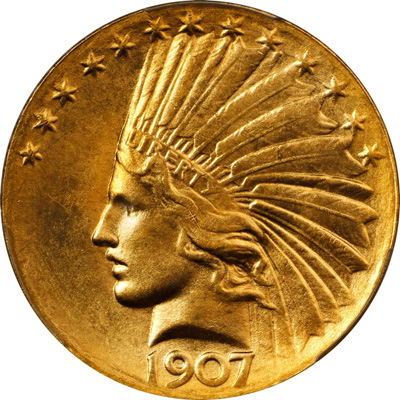 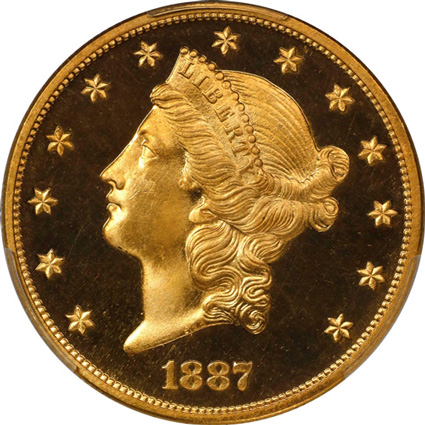 The Mocatta name is well recognized in numismatic circles; coins from this firm were first exhibited publicly in August 1976 at the 85th Annual ANA Convention in New York, NY. During that same 1976 convention, Stack’s featured a specialized group from Mocatta in their auction. This marked the beginning of a relationship that would span more than 45 years and culminate in the present offering.

The Mocatta Collection will be presented in the Rarities Night session of the Stack’s Bowers Galleries Summer 2022 Global Showcase Auction, which will be hosted at Griffin Studios in Costa Mesa, CA from Aug 22 through 26, 2022. For more information about the Mocatta Collection or to register to bid in the sale, contact Stack’s Bowers Galleries today at Info@StacksBowers.com or 800-566-2580.