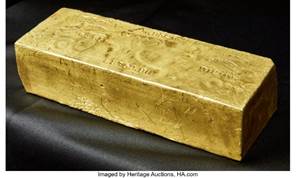 The extraordinary mark was one of three Heritage Auctions Central States events: the World Coins & Ancient Coins Platinum Session and Signature® Auction totaled $14,449,912, while the US Currency Signature® Auction accounted for $8,880,557. Together, the events, which combined to attract more than 12,100 bidders, soared to $65,610,388 in total sales – setting an all-time record by a wide margin for any Central States auction.

“The results of this auction prove once again what happens when you present remarkable numismatic rarities to the more than 1.5 million members on HA.com,” Heritage Auctions President Greg Rohan said. “We saw numerous new records set, many by unprecedented margins. The results garnered by highlights from the Simpson and Warren collections especially, will go down in numismatic auction history.”

US Coins
The Justh & Hunter Ingot was one of two ingots in the auction; a Henry Hentsch Gold Ingot, weighing 238.84 ounces, closed at $540,000. The ingots were thought to be lost forever with the 1857 sinking of the S.S. Central America during a Category 2 hurricane. More than a century later, in 1988, the recovery of the gold was organized by ocean engineer Tommy Thompson, whose crew spent the next four summers recovering roughly two tons of the lost gold. Both of the magnificent ingots sold in this auction were part of Thompson’s first haul from the ocean floor.

The 1863 Liberty Double Eagle, from The Bob R. Simpson Collection, Part VIII, more than doubled the previous auction record. Simpson's collection has been ranked by Professional Coin Grading Service as one of the best ever amassed. This coin is from a reported mintage of just 30 specimens, and is exceptionally rare: both John Dannreuther and PCGS CoinFacts estimate no more than 10-12 proofs – some in impaired condition – survive in all grades. Two are in the National Numismatic Collection at the Smithsonian Institution and another is in the collection of the American Numismatic Society. The Simpson example offered in this auction is the finest known of this acclaimed 19th-century rarity.

In addition to the two lots that brought seven-figure results, the auction included three more lots that topped $500,000 and an additional 59 that brought in winning bids of more than $100,000.

Also from the Simpson Collection was a 1915 S-Less Pan-Pac Half in Gold, PR64, which drew a record bid of $750,000. This magnificent coin is one of the rarest issues in the U.S. pattern series, one of just two examples known. It is struck on a cut-down Saint-Gaudens double eagle. Eric Newman’s handwritten notes state that “Colonel” E.H.R. Green owned both of the known gold specimens, four of the silver examples and three of the copper pieces. These extremely rare patterns were clearly clandestine strikes, produced at the Philadelphia Mint before mintmark punches were applied to the working dies.

Other highlights from the Simpson Collection included, but were not limited to:

Other highlights that were not part of the Simpson Collection included, but were not limited to:

A 1920-S Double Eagle MS65 PCGS, which sold for $600,000. This is a Condition Census example of the issue and one of only four Gems at PCGS. It is believed that virtually all of the 558,000 examples minted of the 1920-S were melted and consequently, unlike some other issues, no European hoards ever surfaced to augment the paltry count of known survivors.

One of just 246 examples struck in the first San Francisco Mint issue of the 1854-S Quarter Eagle VG10 PCGS ended at $360,000; among regular-issue U.S. gold coins, only the 1875 eagle (100 pieces) and half eagle (200 pieces) have smaller production totals. Although the 1854-S was listed in Mint records of the time, the issue was unknown to 19th century collectors. The coins all circulated widely at the time of issue and none were saved for numismatic purposes. As a result, the 1854-S is a landmark rarity today and no Mint State examples are known. PCGS CoinFacts estimates the surviving population at 11-12 examples in all grades, with the finest grading AU50

Complete results from the US Coins Auction can be found at HA.com/1344.

World & Ancient Coins
The May 5-7 auction included 18 lots that sold for more than $100,000 and 37 that reached at least $50,000. It featured selections from the Regent Collection, a trove that is among the finest assemblages of Australian rarities to reach the market in years, if not ever. The Regent Collection enjoyed enormous success, claiming the top two results in the sale and four of the top five. Among the highlights:

The finest of just six known examples of the George V gold Sovereign 1920-S MS64+ NGC, which is widely acknowledged as the “King” of the Australian Sovereign series and led the event at $552,000. This magnificent specimen is from an issue that initially was underappreciated as a rarity, due to its mintage of 360,180 – all from 1920-dated dies and struck between January and June 1920. It was suggested that the small handful of surviving examples was commissioned by prominent Sydney citizen Jacob Garrard from the Mint for distribution to his seven children to celebrate his Golden Wedding Anniversary, but contemporary documentation records no formal order from Garrard, meaning he likely obtained them from the Commonwealth Bank to which the Sydney Mint delivered newly struck Sovereigns during the 1920s. Therefore, the 1920-S represents what is perhaps the paramount rarity of the regular circulation Sovereign series, rather than a private order. This particular representative was held by Garrard's descendants for the last 100-plus years, and represents a fresh addition to the known census not previously available for public auction. 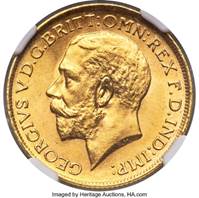 Also from the Regent Collection was a Victoria gold Proof Pattern Sovereign 1853-SYDNEY PR63 Ultra Cameo NGC, which reached $384,000. The famed “Sydney Mint” Pattern Sovereign of 1853 was the first Sovereign for the colony, and one of only four originally produced. This example is believed to be unique in private hands, with all other specimens permanently impounded in museum collections – one in the British Museum and the other two in the Royal Mint Museum of Wales.

The sale included a wide range of highlights from outside the Regent Collection, including: a Victoria gold Proof “Una and the Lion” 5 Pounds 1839 PR62 Ultra Cameo NGC, KM742, S-3851, W&R-278 (R4), Marsh-F23 (R3) is from one of the most fervently and consistently contested series in recent memory and is considered the crowning artistic achievement of master engraver William Wyon at the height of his career. This issue is so popular that its production continued decades later, and the British Royal Mint revived the design for inclusion in its commemorative “Great Engravers” series.

A Nürnberg. Free City gold 6 Ducat 1745-PPW MS60 Prooflike NGC sold for $216,000. This coin is noteworthy as a type absent from both the Erlanger and Paramount collections, it is believed that as few as five other examples having come to auction in the last 20 years, with this very coin serving as the plate in the Standard Catalog of World Coins.

A Constantine I the Great (AD 307-337). AV festaureus or 1-1/4 solidus medallion (25mm, 5.44 gm, 12h). NGC MS★ 5/5 - 5/5 brought a winning bid of $204,000 – a world record for the type. These incredibly rare gold medallions weigh 1-¼ solidi, which corresponds to the old aureus weight standard of the Diocletian reform, and were minted for special festive occasions, hence their Germanic name “festaureus.” This issue commemorates the 30th anniversary (tricennalia) of the reign of Constantine I, which the emperor celebrated in July AD 335 in Constantinople.

Other highlights included, but were not limited to:

Complete results from the World & Ancient Coins auction can be found at HA.com/3099.

US Currency
More than a dozen bids poured in for one of just two Fr. 1218e $1,000 Golds in private hands, driving it to $492,000. Featuring a portrait of Alexander Hamilton, who served as the first U.S. Secretary of the Treasury, this example is one of five – only two of which are available to collectors. 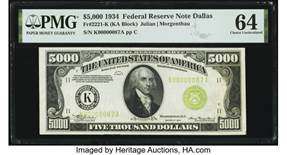 The auction included more than 200 lots from the collection of Ibrahim Salem, whose assemblage of U.S. banknotes is widely recognized as one of the finest in the world. Among the top results from his collection were: 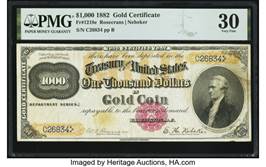 A beautiful Fr. 151 $50 1869 Legal Tender PMG About Uncirculated 55 finished at $216,000. Only 70 examples of the “Rainbow $50” are enumerated in the Track & Price Census, a dozen of which are held in museums or Federal Reserve Banks, only six of which earned higher grades. This auction marked just the second time this note, with serial number Y405621, has been offered at auction since 1983.

Complete results can be found at HA.com/3587.