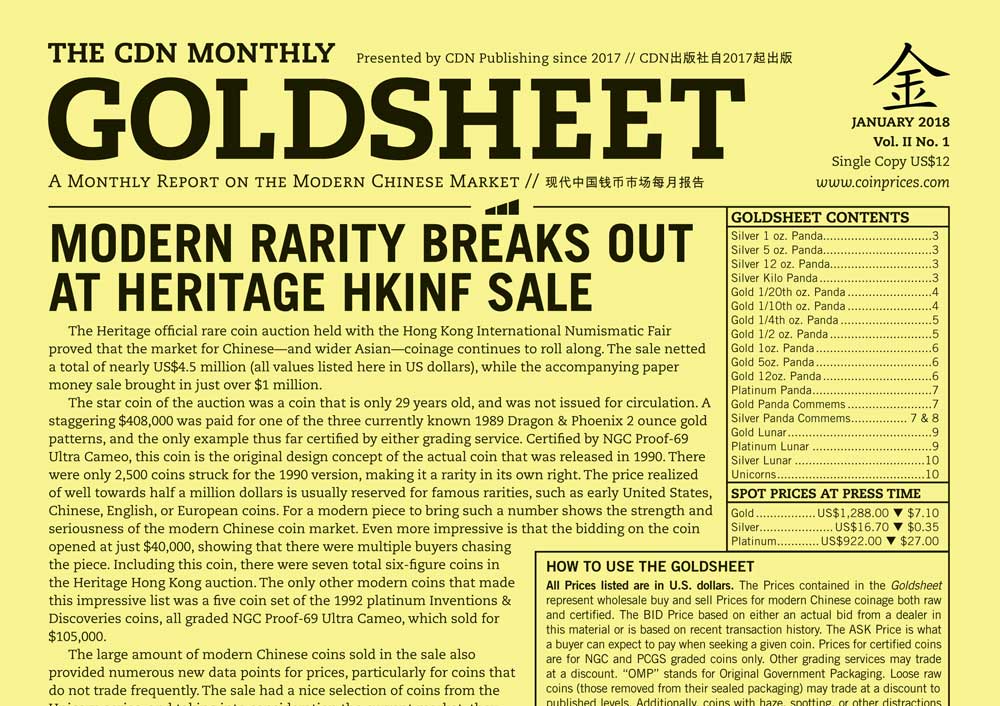 The Heritage official rare coin auction held with the Hong Kong International Numismatic Fair proved that the market for Chinese—and wider Asian—coinage continues to roll along. The sale netted a total of nearly US$4.5 million (all values listed here in US dollars), while the accompanying paper money sale brought in just over $1 million.

The star coin of the auction was a coin that is only 29 years old, and was not issued for circulation. A staggering $408,000 was paid for one of the three currently known 1989 Dragon & Phoenix 2 ounce gold patterns, and the only example thus far certified by either grading service. Certified by NGC Proof-69 Ultra Cameo, this coin is the original design concept of the actual coin that was released in 1990. There were only 2,500 coins struck for the 1990 version, making it a rarity in its own right. The price realized of well towards half a million dollars is usually reserved for famous rarities, such as early United States, Chinese, English, or European coins. For a modern piece to bring such a number shows the strength and seriousness of the modern Chinese coin market. Even more impressive is that the bidding on the coin opened at just $40,000, showing that there were multiple buyers chasing the piece. Including this coin, there were seven total six-figure coins in the Heritage Hong Kong auction. The only other modern coins that made this impressive list was a five coin set of the 1992 platinum Inventions & Discoveries coins, all graded NGC Proof-69 Ultra Cameo, which sold for $105,000.

The large amount of modern Chinese coins sold in the sale also provided numerous new data points for prices, particularly for coins that do not trade frequently. The sale had a nice selection of coins from the Unicorn series, and taking into consideration the current market, they performed well. There were several large format gold and silver Pandas sold as well, and the results were mostly in line with current levels. A 12-ounce gold Panda in its original package was a bargain at $20,400. The one ounce gold Panda is the most popular and plentiful of the five sizes, but the proof strikes are anything but common. A low mintage (2,000 pieces) 1995 one ounce proof gold Panda, NGC Proof-69 Deep Cameo, brought $9,300 and a 1996 of the same size and grade sold for a strong $9,000.

One of the major shows dedicated to world coinage takes place this month, with the New York International Numismatic Convention from the 11th through the 14th. While no Chinese dealers have a table, the is little doubt that this show is an opportunity for collectors of Chinese material to source pieces for their collection.