This month’s Goldsheet issue reflects a soft modern Chinese market so far in 2018. It is clear that right now the trend is much more towards the vintage material, with 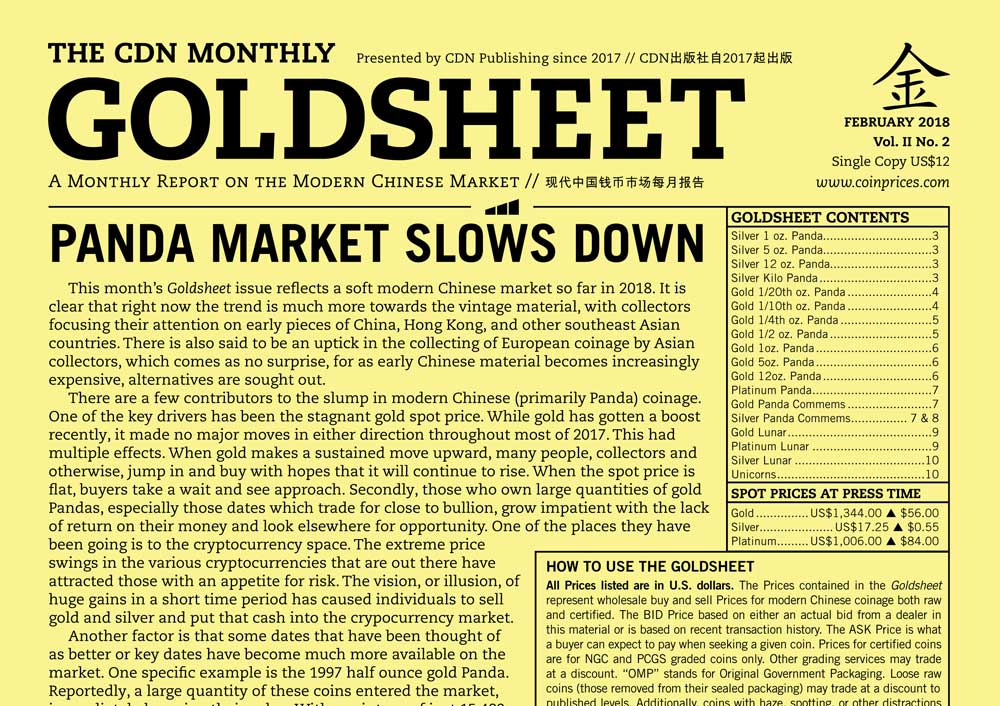 This month’s Goldsheet issue reflects a soft modern Chinese market so far in 2018. It is clear that right now the trend is much more towards the vintage material, with collectors focusing their attention on early pieces of China, Hong Kong, and other southeast Asian countries. There is also said to be an uptick in the collecting of European coinage by Asian collectors, which comes as no surprise, for as early Chinese material becomes increasingly expensive, alternatives are sought out.

There are a few contributors to the slump in modern Chinese (primarily Panda) coinage. One of the key drivers has been the stagnant gold spot price. While gold has gotten a boost recently, it made no major moves in either direction throughout most of 2017. This had multiple effects. When gold makes a sustained move upward, many people, collectors and otherwise, jump in and buy with hopes that it will continue to rise. When the spot price is flat, buyers take a wait and see approach. Secondly, those who own large quantities of gold Pandas, especially those dates which trade for close to bullion, grow impatient with the lack of return on their money and look elsewhere for opportunity. One of the places they have been going is to the cryptocurrency space. The extreme price swings in the various cryptocurrencies that are out there have attracted those with an appetite for risk. The vision, or illusion, of huge gains in a short time period has caused individuals to sell gold and silver and put that cash into the crypocurrency market.

Another factor is that some dates that have been thought of as better or key dates have become much more available on the market. One specific example is the 1997 half ounce gold Panda. Reportedly, a large quantity of these coins entered the market, immediately lowering their value. With a mintage of just 15,483 and an estimated Uncirculated population of less than 4,000, it could be a time to buy for those collectors who are missing this piece in their sets. One bright spot in the market is the mint state one ounce silver Pandas, as a major American buyer is bidding strongly for multiple dates. There are also live bids for multiple gold Lunar coins. Overall in the Panda market commerce is still being done, just at lower price points. Those that adjust quickly will be well positioned for the inevitable turnaround, as it has been proven multiple times that the modern Chinese market can swing the other way quickly. The next major event for this market is the Hong Kong Coin Show (HKCS) in April, with auctions by Stacks Bowers and Champion, which we will preview extensively next month.