The modern Chinese coin market is going through a seasonal downturn, which according to multiple dealers is a normal occurrence every year. This, coupled with lagging p 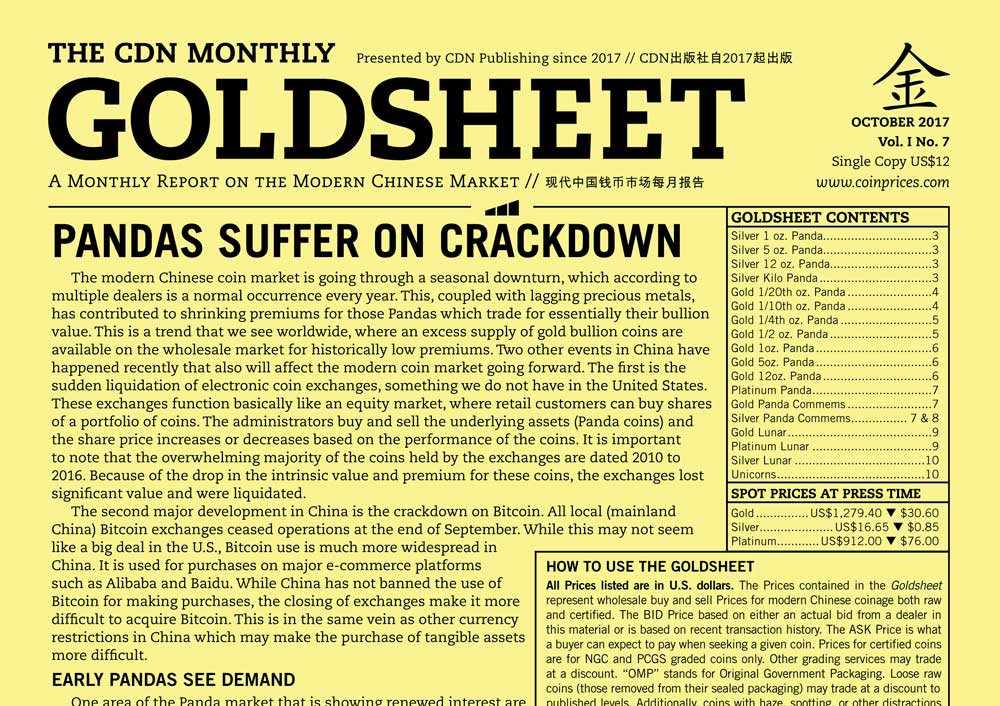 The modern Chinese coin market is going through a seasonal downturn, which according to multiple dealers is a normal occurrence every year. This, coupled with lagging precious metals, has contributed to shrinking premiums for those Pandas which trade for essentially their bullion value. This is a trend that we see worldwide, where an excess supply of gold bullion coins are available on the wholesale market for historically low premiums. Two other events in China have happened recently that also will affect the modern coin market going forward. The first is the sudden liquidation of electronic coin exchanges, something we do not have in the United States. These exchanges function basically like an equity market, where retail customers can buy shares of a portfolio of coins. The administrators buy and sell the underlying assets (Panda coins) and the share price increases or decreases based on the performance of the coins. It is important to note that the overwhelming majority of the coins held by the exchanges are dated 2010 to 2016. Because of the drop in the intrinsic value and premium for these coins, the exchanges lost significant value and were liquidated.

The second major development in China is the crackdown on Bitcoin. All local (mainland China) Bitcoin exchanges ceased operations at the end of September. While this may not seem like a big deal in the U.S., Bitcoin use is much more widespread in China. It is used for purchases on major e-commerce platforms such as Alibaba and Baidu. While China has not banned the use of Bitcoin for making purchases, the closing of exchanges make it more difficult to acquire Bitcoin. This is in the same vein as other currency restrictions in China which may make the purchase of tangible assets more difficult.

One area of the Panda market that is showing renewed interest are early and better-date silver Pandas. Like other areas of the numismatic market, the separation between common items and scarce pieces is getting bigger. This includes the early dates of the silver Panda: 1983, 1984, 1985, etc. These are the coins most often missing from sets and eagerly sought by dealers. As a result, their prices are quite stable and steadily increase over time. There is also support for the larger 5 ounce and 12 ounce silver Pandas at current levels. In gold Pandas, the key date 1998 coins in all sizes are also in demand. Reports from the September Long Beach Expo was that activity was moderate with low retail sales, although dealer-to-dealer business was better. It is certainly a buyer’s market for those willing to take a contrarian approach, as dealers are happy to make deals. With many gold Pandas available at very low premiums over melt, it would not take a huge move in gold to be in a profit position.