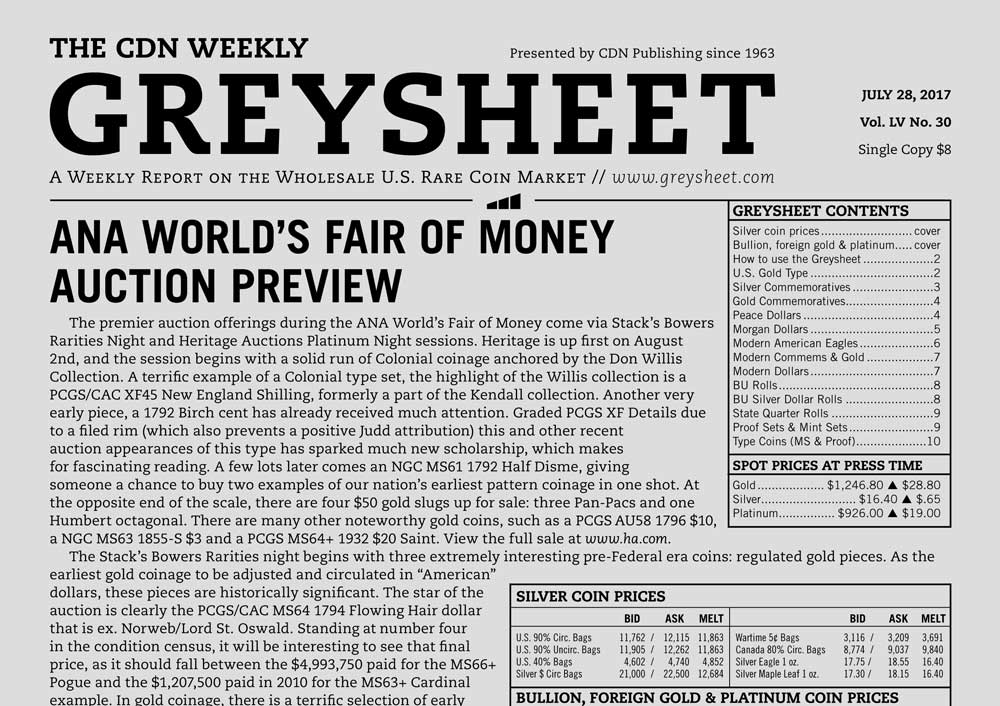 
The premier auction offerings during the ANA World’s Fair of Money come via Stack’s Bowers Rarities Night and Heritage Auctions Platinum Night sessions. Heritage is up first on August 2nd, and the session begins with a solid run of Colonial coinage anchored by the Don Willis Collection. A terrific example of a Colonial type set, the highlight of the Willis collection is a PCGS/CAC XF45 New England Shilling, formerly a part of the Kendall collection. Another very early piece, a 1792 Birch cent has already received much attention. Graded PCGS XF Details due to a filed rim (which also prevents a positive Judd attribution) this and other recent auction appearances of this type has sparked much new scholarship, which makes for fascinating reading. A few lots later comes an NGC MS61 1792 Half Disme, giving someone a chance to buy two examples of our nation’s earliest pattern coinage in one shot. At the opposite end of the scale, there are four $50 gold slugs up for sale: three Pan-Pacs and one Humbert octagonal. There are many other noteworthy gold coins, such as a PCGS AU58 1796 $10, a NGC MS63 1855-S $3 and a PCGS MS64+ 1932 $20 Saint. View the full sale at www.ha.com.

The Stack’s Bowers Rarities night begins with three extremely interesting pre-Federal era coins: regulated gold pieces. As the earliest gold coinage to be adjusted and circulated in “American” dollars, these pieces are historically significant. The star of the auction is clearly the PCGS/CAC MS64 1794 Flowing Hair dollar that is ex. Norweb/Lord St. Oswald. Standing at number four in the condition census, it will be interesting to see that final price, as it should fall between the $4,993,750 paid for the MS66+ Pogue and the $1,207,500 paid in 2010 for the MS63+ Cardinal example. In gold coinage, there is a terrific selection of early pieces, including a PCGS AU53 1797 16 Stars half eagle, a PCGS/CAC MS63 1806 7×6 Stars half eagle, and a PCGS MS62 1799 Small Stars eagle. All lots of the auction can be viewed atwww.stacksbowers.com.

There were two notable auction results in this series from the Legend Auctions Regency XXII sale that deserve mentioning. An 1892-S graded PCGS/CAC MS64 sold for an eye-opening $293,750. The last coin of this date to get close to that price was a PCGS MS67 piece sold by Stack’s Bowers in their June 2012 Baltimore sale. The second was a monster toned 1880-S graded PCGS/CAC MS68+ which realized $61,688. Even more surprising—and rare in today’s market—this coin sold for $35,250 just a few years ago, netting the seller a tidy profit.