The Heritage Central States auctions brought home more than $22.75 million in total sales of U.S. coins alone, led by an exciting gold rarity that made headlines around 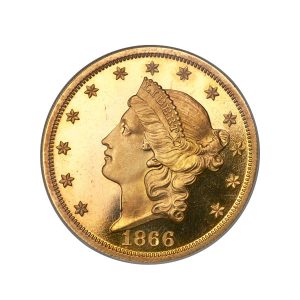 The Heritage Central States auctions brought home more than $22.75 million in total sales of U.S. coins alone, led by an exciting gold rarity that made headlines around the world. According to Jim Halperin, co-chairman of Heritage, “the 1866 $20 with motto, PR65 Cameo NGC (Gold CAC sticker) was donated earlier this year to the GracePoint Church in Valparaiso, Indiana, to help their congregation acquire its own church building.” One of just 10 examples of this proof double eagle known to exist, it realized $517,000 at during the session, setting a price record for the issue. Even more encouraging, Halperin continued to state that, “the coin market is showing signs of increasing strength, and our Platinum night drew premier bids across the board.”

That next-highest price realized in the coin auction went to an 1828/7 capped head eagle, certified NGC MS63 at $223,250. This coin boasts a provenance going back to 1939 and has graced a number of well known collections of the past. Rounding out the top three was an example of the key date 1895 Morgan dollar, this one graded PCGS PR67 Deep Cameo selling for $199,750. The related Heritage currency sales brought in another nearly $10 million bringing the overall take for the Dallas-based auction company to greater than $32.5 million.

The precious metals markets have been rough lately. Gold has been falling back towards $1,200 and silver is now well below $16.50. Platinum has taken the biggest drop, falling all the way to $900. There are multiple factors which have contributed to this decline in a relatively short time. The biggest issue is the looming June rate increase from the Federal Reserve. According to Bloomberg rate hike odds—based on a regularly conducted survey of market participants—there is currently a 94% chance of a rate increase at the June meeting. By way of comparison, the odds were below 60% for most of the past five months. This has most equities markets (bonds, equities, currencies, etc) on edge and has clearly impacted the sales of physical bullion in the rare coin market.

Coin shops around the country are reporting that sales of one-ounce gold coins have slowed considerably, and premiums on silver items are at multi year lows. 90% coin silver bags and 10 ounce silver bars, in particular, have virtually zero premium over their melt value. One would argue that this is what many precious metals buyers have been waiting for, but the psychology of buying when an asset is falling is something that many speculators are not willing to do. If and when the large equity market correction hits, as many think it will, this could possibly trigger a flight in the opposite direction, back to precious metals.