GREYSHEET: HERITAGE RINGS UP OVER $16 MILLION 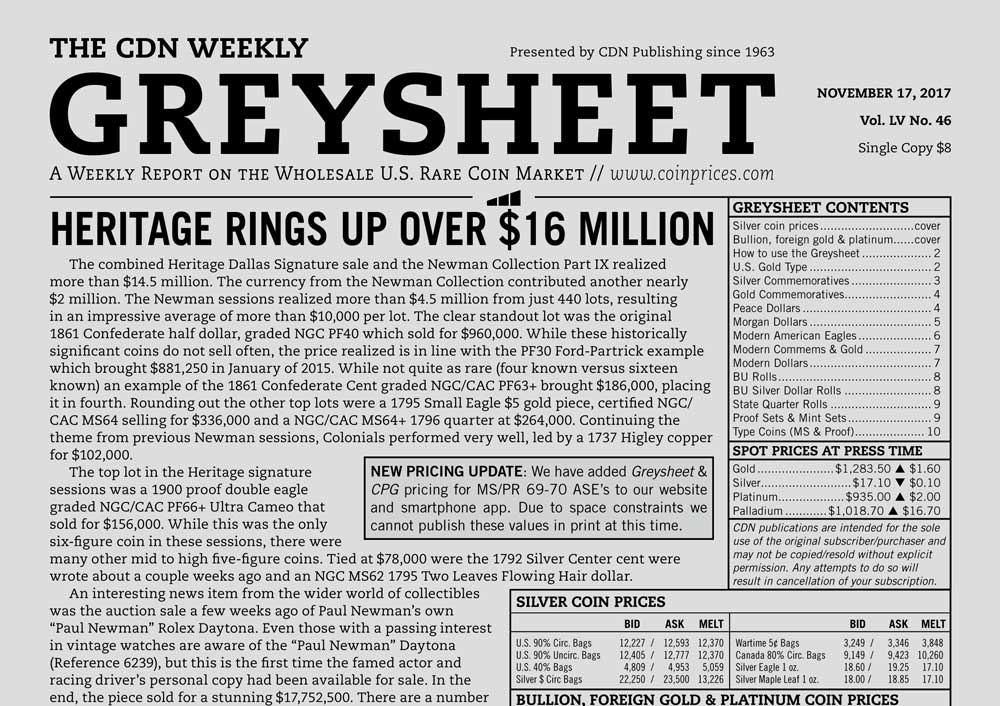 GREYSHEET: HERITAGE RINGS UP OVER $16 MILLION

The combined Heritage Dallas Signature sale and the Newman Collection Part IX realized more than $14.5 million. The currency from the Newman Collection contributed another nearly $2 million. The Newman sessions realized more than $4.5 million from just 440 lots, resulting in an impressive average of more than $10,000 per lot. The clear standout lot was the original 1861 Confederate half dollar, graded NGC PF40 which sold for $960,000. While these historically significant coins do not sell often, the price realized is in line with the PF30 Ford-Partrick example which brought $881,250 in January of 2015. While not quite as rare (four known versus sixteen known) an example of the 1861 Confederate Cent graded NGC/CAC PF63+ brought $186,000, placing it in fourth. Rounding out the other top lots were a 1795 Small Eagle $5 gold piece, certified NGC/CAC MS64 selling for $336,000 and a NGC/CAC MS64+ 1796 quarter at $264,000. Continuing the theme from previous Newman sessions, Colonials performed very well, led by a 1737 Higley copper for $102,000.

The top lot in the Heritage signature sessions was a 1900 proof double eagle graded NGC/CAC PF66+ Ultra Cameo that sold for $156,000. While this was the only six-figure coin in these sessions, there were many other mid to high five-figure coins. Tied at $78,000 were the 1792 Silver Center cent were wrote about a couple weeks ago and an NGC MS62 1795 Two Leaves Flowing Hair dollar.

An interesting news item from the wider world of collectibles was the auction sale a few weeks ago of Paul Newman’s own “Paul Newman” Rolex Daytona. Even those with a passing interest in vintage watches are aware of the “Paul Newman” Daytona (Reference 6239), but this is the first time the famed actor and racing driver’s personal copy had been available for sale. In the end, the piece sold for a stunning $17,752,500. There are a number of aspects that make this price interesting: first, the watch is not particularly old (manufactured in 1968); it is not made of any type of precious metal (stainless steel); and it is not in pristine condition, as the watch was worn regularly in everyday life. The most poignant takeaway as it relates to the coin business is that this watch sold for over $7 million more than the most expensive coin ever sold at public auction. How should the rare coin market take this? It seems, at least on the surface, that historical coins which (may) have been handled by Washington, Jefferson, or Franklin should be worth more than a timepiece. It is not a stretch that this could provide one piece of evidence that truly rare coins are truly undervalued.

We received considerable feedback on pricing adjustments last week and have made a few important changes based on this.

We have added Greysheet & CPG pricing for MS/PR 69-70 ASE’s to our website and smartphone app. Due to space constraints we cannot publish these values in print at this time.