The Heritage Dallas sale wound up with more than $6.8 million in total prices realized, a strong showing for an auction not held in conjunction with a major convention. 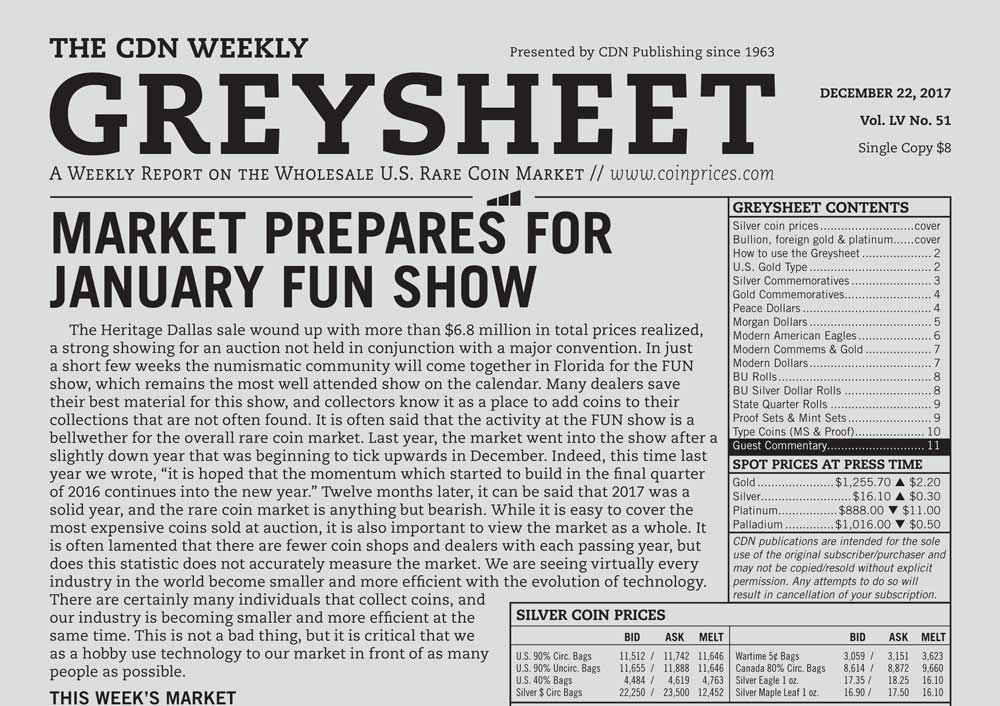 The Heritage Dallas sale wound up with more than $6.8 million in total prices realized, a strong showing for an auction not held in conjunction with a major convention. In just a short few weeks the numismatic community will come together in Florida for the FUN show, which remains the most well attended show on the calendar. Many dealers save their best material for this show, and collectors know it as a place to add coins to their collections that are not often found. It is often said that the activity at the FUN show is a bellwether for the overall rare coin market. Last year, the market went into the show after a slightly down year that was beginning to tick upwards in December. Indeed, this time last year we wrote, “it is hoped that the momentum which started to build in the final quarter of 2016 continues into the new year.” Twelve months later, it can be said that 2017 was a solid year, and the rare coin market is anything but bearish. While it is easy to cover the most expensive coins sold at auction, it is also important to view the market as a whole. It is often lamented that there are fewer coin shops and dealers with each passing year, but does this statistic does not accurately measure the market. We are seeing virtually every industry in the world become smaller and more efficient with the evolution of technology. There are certainly many individuals that collect coins, and our industry is becoming smaller and more efficient at the same time. This is not a bad thing, but it is critical that we as a hobby use technology to our market in front of as many people as possible.

Updates this week based primarily on the results of the Heritage Dallas auction. As we have seen in the past the results are varied, but overall the market for this segment seems to be firmer than earlier in the year. One highlight is a PCGS/CAC MS65+ 1926 Sesquicentennial half dollar which brought $4,560. The last time a coin in the same grade approached this price was April of 2016. Interestingly, Legend Rare Coin Auctions is selling a PCGS/CAC MS66 Sesqui in their current Regency XXIV sale. In gold commems, a 1903 Louisiana/McKinley gold dollar graded PCGS/CAC MS67+ sold for $7,200 at Heritage, in line with recent results.

Precious metals have stopped to catch their breath over the past week, after weeks of volatility. This stability has brought fresh and for the most part higher bids for generic gold.