The final two online-only sessions of the Heritage FUN auction brought in over $2.45 million, bringing the overall total of the U.S. coin sale to $34.2 million. 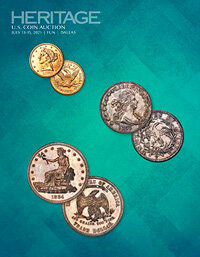 High volatility has marked the gold spot price recently, and after an initial strong rally the first week of the year the yellow metal has retreated some.

High volatility has marked the gold spot price recently, and after an initial strong rally the first week of the year the yellow metal has retreated some.

The final two online-only sessions of the Heritage FUN auction brought in over $2.45 million, bringing the overall total of the U.S. coin sale to $34.2 million. This result is significantly less than the prior two years, with the 2015 FUN sale reaching $70.1 million and the 2014 sale at $64.9 million. There are multiple factors to consider when looking at such change year over year. Among those, the impact of the “big three” collections that have been sold over the past 2Ã ½ years (Newman, Gardner, and Pogue) have drawn collector / investor dollars that would otherwise have been spent in a FUN auction. On the selling side, it is widely believed that many of the high end coins being sold are going into strong hands that have no intention of consigning or selling anytime soon. On a more macro scale, the rough start to the year in the equity markets have many investors spooked, uncertain when and at what levels their portfolio will eventually settle. It’s possible investors will see tangible assets like rare coins as a haven.

THIS WEEK’S MARKET
Gold Type: High volatility has marked the gold spot price recently, and after an initial strong rally the first week of the year the yellow metal has retreated some. However, high grade gold type that is premium for the grade (Plus graded or CAC-endorsed) remains in demand and there is a shortage of supply for such coins. Also, proof gold type prices have been brought in line with prevailing bid levels.
Classic Silver Commemoratives: This series has been thoroughly reviewed for the first time since we expanded the listings to include all 144 issues. We received significant feedback regarding the pricing of dated BTW and Wash-Carver halves and others. We have adjusted prices, accordingly, to better differentiate values of the scarce issues. We have also focused this week on the XF through MS60 grades, as many of these prices have not seen an update in a number of years.
Classic Gold Commemoratives: The market has dropped on this series and CAC has reduced their buy prices (bids) on CoinPlex. We’re not sure if we’ve hit the market bottom for this series, but values are looking quite appealing.
Silver Dollars: This week we have reviewed the early dates in the Morgan dollar series, updating prices with recent transaction data. Next week we will continue our review of the series (see Bluesheet for additional price movement, especially in DMPL dollars).
First Spouses: We finally spotted some bids posted on open traffic this week on CoinPlex for First Spouses. Lots of pluses here.
Modern Commemoratives: Readers will be happy to see that we have added new listings to this category this week: the March of Dimes silver dollar, the four Presidential Coin & Chronicles sets, and the four-piece Kennedy 50th Anniversary set. The Presidential Coin
& Chronicles were very popular and all sold out at the U.S. Mint shortly after release.
Mint & Proof Sets: Early mint sets continue to be adjusted to current market levels, along with slight adjustments to early proof sets.