It seems that precious metals buyers have reacted to the dip in the silver spot price, as the United States Mint has sold 1.29 million American silver eagles through Ju 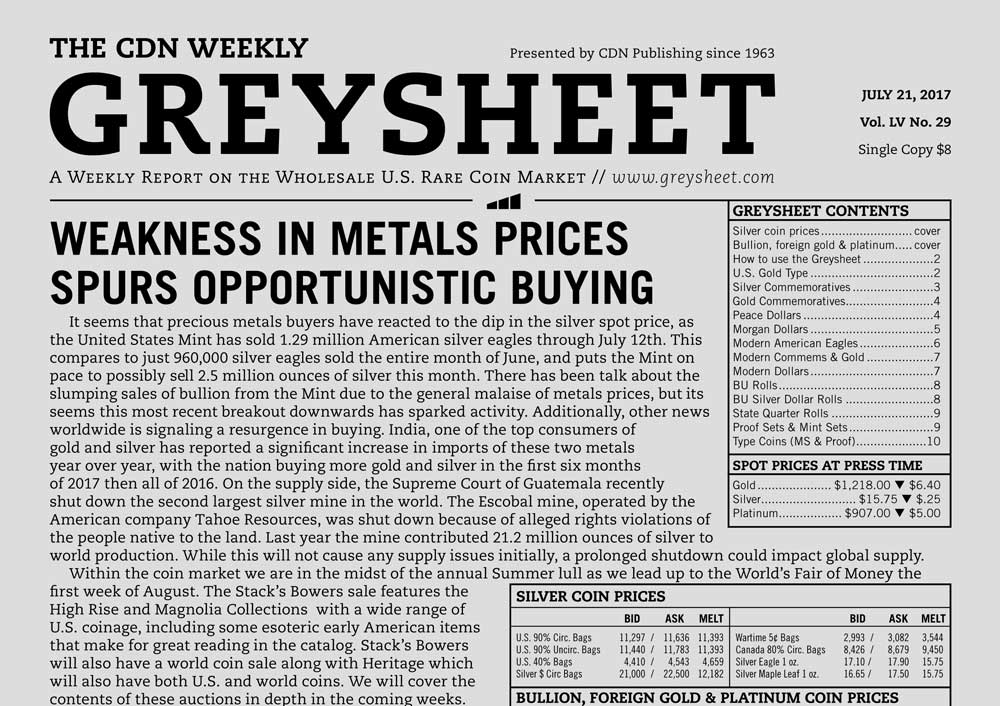 It seems that precious metals buyers have reacted to the dip in the silver spot price, as the United States Mint has sold 1.29 million American silver eagles through July 12th. This compares to just 960,000 silver eagles sold the entire month of June, and puts the Mint on pace to possibly sell 2.5 million ounces of silver this month. There has been talk about the slumping sales of bullion from the Mint due to the general malaise of metals prices, but its seems this most recent breakout downwards has sparked activity. Additionally, other news worldwide is signaling a resurgence in buying. India, one of the top consumers of gold and silver has reported a significant increase in imports of these two metals year over year, with the nation buying more gold and silver in the first six months of 2017 then all of 2016. On the supply side, the Supreme Court of Guatemala recently shut down the second largest silver mine in the world. The Escobal mine, operated by the American company Tahoe Resources, was shut down because of alleged rights violations of the people native to the land. Last year the mine contributed 21.2 million ounces of silver to world production. While this will not cause any supply issues initially, a prolonged shutdown could impact global supply.

Within the coin market we are in the midst of the annual Summer lull as we lead up to the World’s Fair of Money the first week of August. The Stack’s Bowers sale features the High Rise and Magnolia Collections with a wide range of U.S. coinage, including some esoteric early American items that make for great reading in the catalog. Stack’s Bowers will also have a world coin sale along with Heritage which will also have both U.S. and world coins. We will cover the contents of these auctions in depth in the coming weeks.

Along with last week’s issue, we have fully reviewed this series, with most of the activity at the MS66 and MS67 levels.

Despite the increased sales of bullion mentioned above, the bids on proof silver eagle and proof platinum eagles continue to drop. Recently the Mint released the 2017-W 20th Anniversary proof platinum eagle which uses the original design when this coin was introduced in 1997. This coin has a mintage of just 10,000 pieces. While generally items with that low of a mintage sell out rather quickly, within the first few days of release, this coin was still available to purchase on the Mint website as of this writing.