Despite these large quantities of regular issue coinage, a few rarities managed to be accidentally struck in tiny numbers and sneak out of the US Mint. 1943 "pennies" were meant to be struck in Steel, but just a few were accidentally created on bronze planchets, producing a rarity that has fascinated collectors ever since. 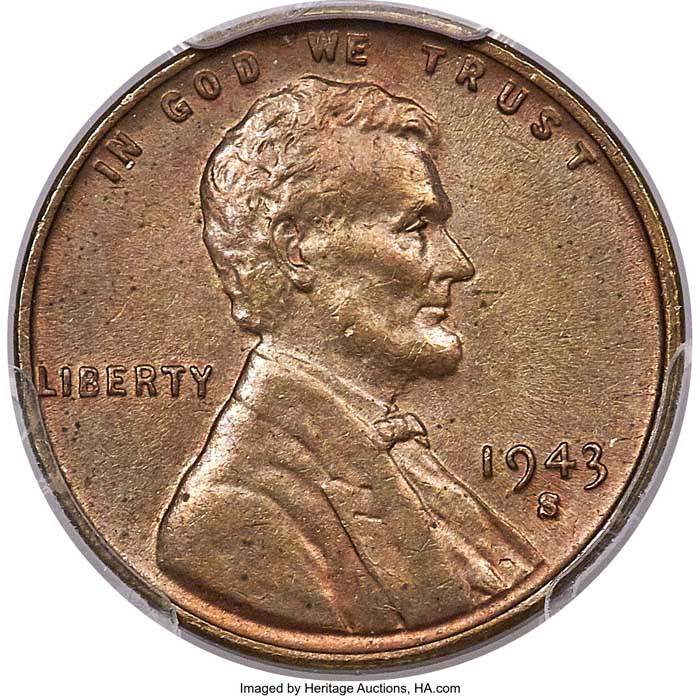 1943 was a strange year for the US Mint in several ways. First of all, Cents were struck in a silvery-colored Steel composition rather than the normal coppery-looking Bronze because of a shortage of industrial metals during World War II. Next, another change was made to the composition of Nickels because nickel was needed for the war effort as well. So-called "War Nickels" were created on 40% silver planchets to free up more nickel to be used for the Allied forces. Meanwhile, mintages of circulating coins were generally very high, with large numbers of small coins being produced in the 1940s overall. For example, nearly 1.1 billion Steel Cents were struck between the Philadelphia, Denver, and San Francisco Mints.

Despite these large quantities of regular issue coinage, a few rarities managed to be accidentally struck in tiny numbers and sneak out of the US Mint. Specifically, the famous rarity of 1943 is the Bronze Cent. 1943 "pennies" were meant to be struck in Steel, but just a few were accidentally created on bronze planchets, producing a rarity that has fascinated collectors ever since and sent many "roll hunters" on a search of rolls of pennies, looking for the ultimate numismatic prize.

Having just one 1943 Bronze Cent in an auction would be a major deal given that these are generally six figure coins. However, Heritage Auctions has a Bronze Cent bonanza going on due to the wonderful Bob Simpson collection, which contained more than one of these rare pieces!

The San Francisco 1943-S version will be offered in Heritage's November sale here and is one of only 6 such coins known from the California minting facility: https://coins.ha.com/itm/lincoln-cents/small-cents/1943-s-1c-struck-on-a-bronze-planchet-ms62-brown-pcgs-cac-pcgs-82715-/p/1321-12274.s?ic4=ListView-Thumbnail-071515

Just to set the history of the 1958 ANA Sale of the 1943 Bronze cent to be more accurate, it was me who purchased that cent out of the 1985 Mid-America sale at a, then, incredible price of $15, 300. I believe it was, at that time, the highest price ever paid for a cent of the 20th Century. I eventually sent it to ANACS for certification and it was graded MS61 by them. I sold it later to Jay Perino who quickly sold it to one of his customers. Benson had seen the coin when I still owned it but decided not at that time to buy it. He later ended up paying a lot more for it than my asking price. I have photos of it in its ANACS holder and contemporary published articles about my purchase of this famous "1943 Copper Penny" if you would like to add this info to the future auction sale catalog. Harold Kritzman, President Olde Towne Coin Company, Inc coinman1@cox.net

It is interesting to note that the 1943 brass Penny revived the old west con of covering an 1883 V no cents nickel in a thin gold layer . This was done to very closely resemble the then circulating $5 gold pieces. In the instance of the 1943 steel penny there have been at least a few individuals to cover a 1943 steel penny in brass. Then to pass it of on an anxious coin dealer for a small profit. Enterprising coin dealers soon adopted a quick and foolproof counter measure. They kept a magnet nearby to simply pass over the “decoy”. If it responds one knew immediately that larceny was in the entrepreneurs heart!