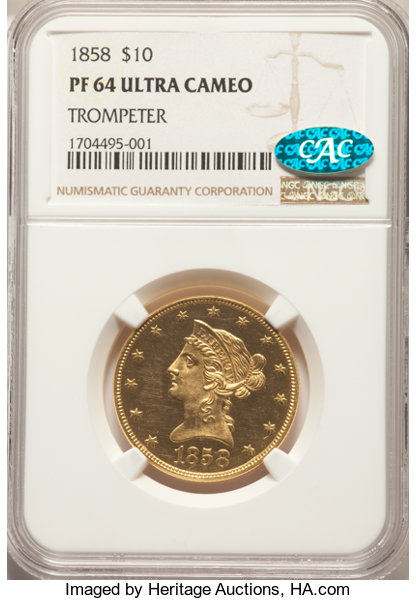 DALLAS, Texas – The convention might be canceled, but Heritage Auctions’ presentation of nearly 3,000 lots of U.S. Coins is right on schedule for the Central States Numismatic Society (CSNS) auctions , 23-24 & 26. Heritage is hosting the sales at its Dallas headquarters and worldwide on HA.com.

CSNS organizers canceled what would have been the convention’s 81 st anniversary event because of the COVID-10 virus pandemic sweeping across the nation. Heritage is the convention’s official auctioneer.

“CSNS is one of the highlight auction events our clients look forward to every year,” said Jim Halperin, Co-founder of Heritage Auctions. “We worked with convention organizers to make sure the truly stellar offerings are still offered despite the cancellation.”

A selection of scarce gold may claim top-lot honors among the sales. An 1858 Liberty Eagle , one of the most historic U.S. gold coins ever minted and the only specimen known outside of museums. Experts agree no more than four to six 1858 proof Liberty Eagles were produced, like the coin offered here, graded PR64 Ultra Cameo NGC., CAC. JD-1, High R.7, is one of four examples that have been reliably reported; three of those coins are included in institutional collections at the Smithsonian Institution, the American Numismatic Society, and the Connecticut State Library.

A 1933 Indian Eagle , MS65 NGC, is a world-class rarity. Of the 312,500 such coins minted, nearly all of the original production was melted shortly after the coins were manufactured, due to the Gold Recall of President Franklin D. Roosevelt. The 1933 Eagles are the only U.S. gold coins bearing that date that are legal to own. All known examples of the coin are Uncirculated – but Gem examples such as the present specimen are among the scarcest American gold coins every minted.

Carson City Gold coins are perennial favorites among collectors and this year’s CSNS auction offers a 1870-CC Double Eagle , VF30 – the premier Carson City Gold rarity. The coin’s history is rooted in the great California Gold Rush, and remains notable for the lowest production total overall, with only 3,789 pieces. The entirety of this small figure was soon dispersed into local commerce, where it was left to slowly fade away from loss and widespread circulation. As a result, the few surviving representatives exhibit light to moderate wear and are plagued by heavy abrasions. Apparently, no examples were retained by contemporary collectors and those pieces that still exist likely survived only by chance or as part of small gold hoards.

A 1863 Three Dollar Gold, MS68 , is among the finest certified. Only 5,000 business-strike three-dollar gold pieces were struck during the height of the U.S. Civil War in 1863. The coins were delivered in a single batch and few were saved by contemporary collectors, who preferred proofs to circulation strikes for numismatic purposes. As might be expected, the issue is scarce in all grades today, and Mint State examples are rare.

Collectors of early copper will be delighted to see the finest certified example of the 1811 Classic Head Half Cent , PCGS MS66 Red and Brown, is a low-mintage key in the popular series with only a handful of high-quality examples to have survived over the years. An appearance of a Mint State specimen is a notable event for early copper collectors. The present coin is a spectacular Premium Gem, the only 1811 half cent certified with the Red and Brown designation and the single-finest example certified by CAC. Another early copper rarity, a 1793 Chain Cent , AU55, is a historic specimen, which holds the honor of being not only the first issue of its denomination, it is the first regular-issue coin ever struck within the confines of the Philadelphia Mint.