It Is Easy To Collect Very Fine Grade Morgan Dollars 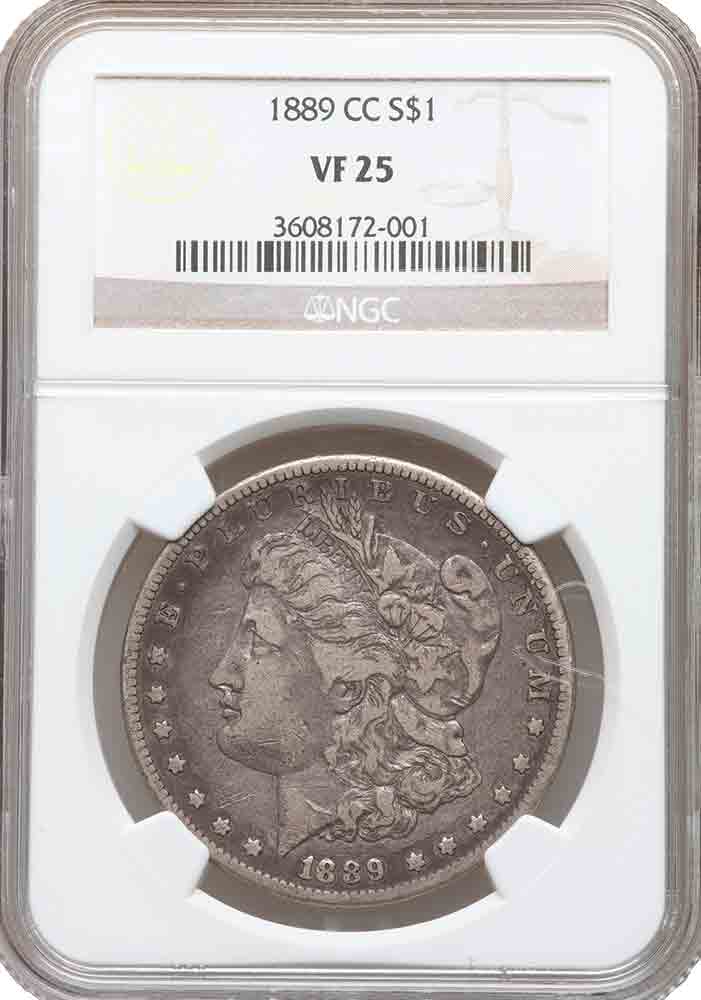 As Mint State Morgan silver dollars are extensively advertised and gem-quality better date Morgans realize astounding prices in major auctions, collectors forget that Very Fine grade Morgans have much detail and are often very desirable coins. In my view, VF20 to VF30 grade Morgan dollars are better values than AU53 to MS63 grade Morgans. Indeed, it is easy to complete a set of business strike Morgans in VF20 to VF30 grades, at a fraction of the cost of an MS or AU set. 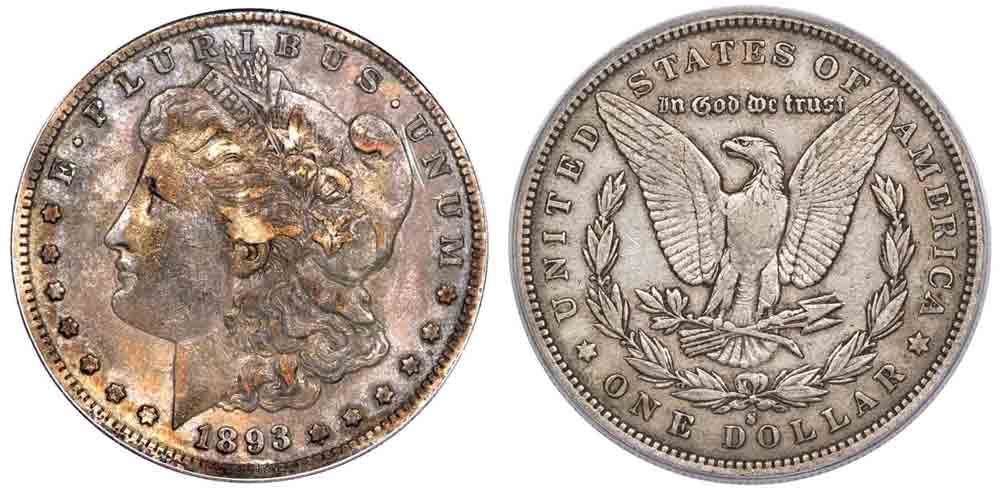 Naturally toned, relatively original VF grade Morgans are usually pleasing, though not always. Collectors who attend small to medium size coin shows should be able to find plenty of circulated Morgans and may carefully select coins that are naturally toned and evenly worn, with no apparent problems.

Very Fine grade Morgans exhibit much original detail. The obverse of each uncirculated Morgan silver dollar does not have all that much detail, anyway. The stars lack centrils and are sort of crudely shaped. The face of Miss Liberty was not finely chiseled by the designer and engravers. Besides, on a Very Fine grade Morgan, Miss Liberty’s facial features and most of her hair are visible. Her headband is sharp.

The letters of LIBERTY are usually clear and bold on Very Fine grade Morgan silver dollars. Moreover, the Latin phrase, E. PLURIBUS UNUM—‘From Many Emerged One,’ is very clear. On the reverse, some feathers may be worn away and a few leaves may be a little blurry on a Very Fine grade Morgan. In many instances, though, some feathers were not clearly struck when the coins were made.

Generally, on Very Fine grade coins, most of the reverse details are there, all the letters plus the outlines of all the arrows and leaves. The eagle is usually clear, including his forehead, eye, beak and mouth.

Even Mint State Morgan dollars have some bland or poorly defined areas, like the hair above Miss Liberty’s ear and the arrowheads. Indeed, on many Mint State Morgans, some feathers on the eagle’s chest are blurry, faint or missing.

The most frequently noticed imperfection on Mint State Morgans is the prevalence of “bag marks.” While dozens or hundreds of bag marks are visible on a substantial percentage of surviving MS60 to MS64 grade Morgans, many of these marks were naturally worn down to barely perceptible levels as coins reached VF grades.

The bag marks occurred as Morgan dollars banged against each other at each mint, while in transit to banks, or while being moved around in bags at banks. Moreover, particular kinds of businesses, including casinos, emptied bags of Morgans into drawers or into machines. The bag marks came about while Morgan dollars were uncirculated or almost so. They are much less of an issue on Very Fine grade coins.

As contact marks were muted through wear, mint caused lumps, lines, shapes and anomalies tended to wear down. Many of the more subtle die varieties may be difficult or even impossible to identify on VF20 grade Morgans. For every person who collects Morgans by die variety, however, more than two hundred people collect Morgans by date, meaning year and mint combinations.

How many dates are there in a complete set of circulated Morgan silver dollars? There is no easy answer to this question, certainly at least one hundred.

As the 1887/6 overdate is readily apparent without magnification, the 1887 and the 1887/6 are two different Philadelphia Mint dates of the same year. The 1887/6-O is likewise distinct from the 1887-O. The other overdates in the series, though, are barely perceptible. Collectors should not need a microscope or access to a university laboratory to complete a set of coins by date. The 1887/6 overdates are the only overdates needed for a set of Morgans by date.

It is not extremely important as to whether an 1878 Morgan has eight tailfeathers or seven tailfeathers or was struck from a die that bears characteristics of both eight and seven tailfeather varieties. One 1878 Philadelphia Mint Morgan is enough, in my view. The collector who thinks otherwise, however, may feel fortunate that representatives of multiple 1878 reverse varieties are inexpensive. The CPG® retail value estimate for an 1878 with eight tailfeathers in VF20 grade is $94, and representatives of other reverse varieties are listed as being worth $54 each in VF20 grade.

The 1880/79-O overdate, if it is an overdate, is just too minor to be required for a set by date. Moreover, there is minimal evidence of an overdate on most coins of this die variety. The various 1880-CC varieties are more subtle and obscure. These are interesting to collectors who focus on die varieties and enjoy using microscopes. For a collector who is seeking to complete a set of Morgans by date, the supposed faint traces of sevens about the respective numeral eight on many 1880-CC Morgans are not relevant to completing a set by date. These are relatively inconsequential minting anomalies.

I am not opposed to the study of die varieties. I am hoping that additional people will be encouraged to collect coins and I wish to generate more enthusiasm among existing collectors. Collectors assembling sets should not feel pressured to include minor varieties in sets and price guides should not list them as if they are needed for sets.

On high grade 1880/79-S Morgans, I find very little evidence, under five or ten times magnification, of a ‘7’ or a ‘9’! I admit that I have not carefully examined a large number of these and I have not viewed an 1880-S with a microscope. The scientific case that all the listed overdates are real could be far more powerful than I have imagined.

The immediate point is not to communicate skepticism; a sub-theme here is that very subtle varieties, which are hardly noticeable without magnification if noticeable at all, are not needed for a complete set by date, though blatant overdates and blatant overmintmark varieties, if any, are required to complete a set by date. To be blatant, an overdate must be readily apparent as an overdate without magnification. The 1807/6 cent, 1918/7-D nickel, 1806/5 quarter and 1918/7-S quarter are examples of blatant overdates. 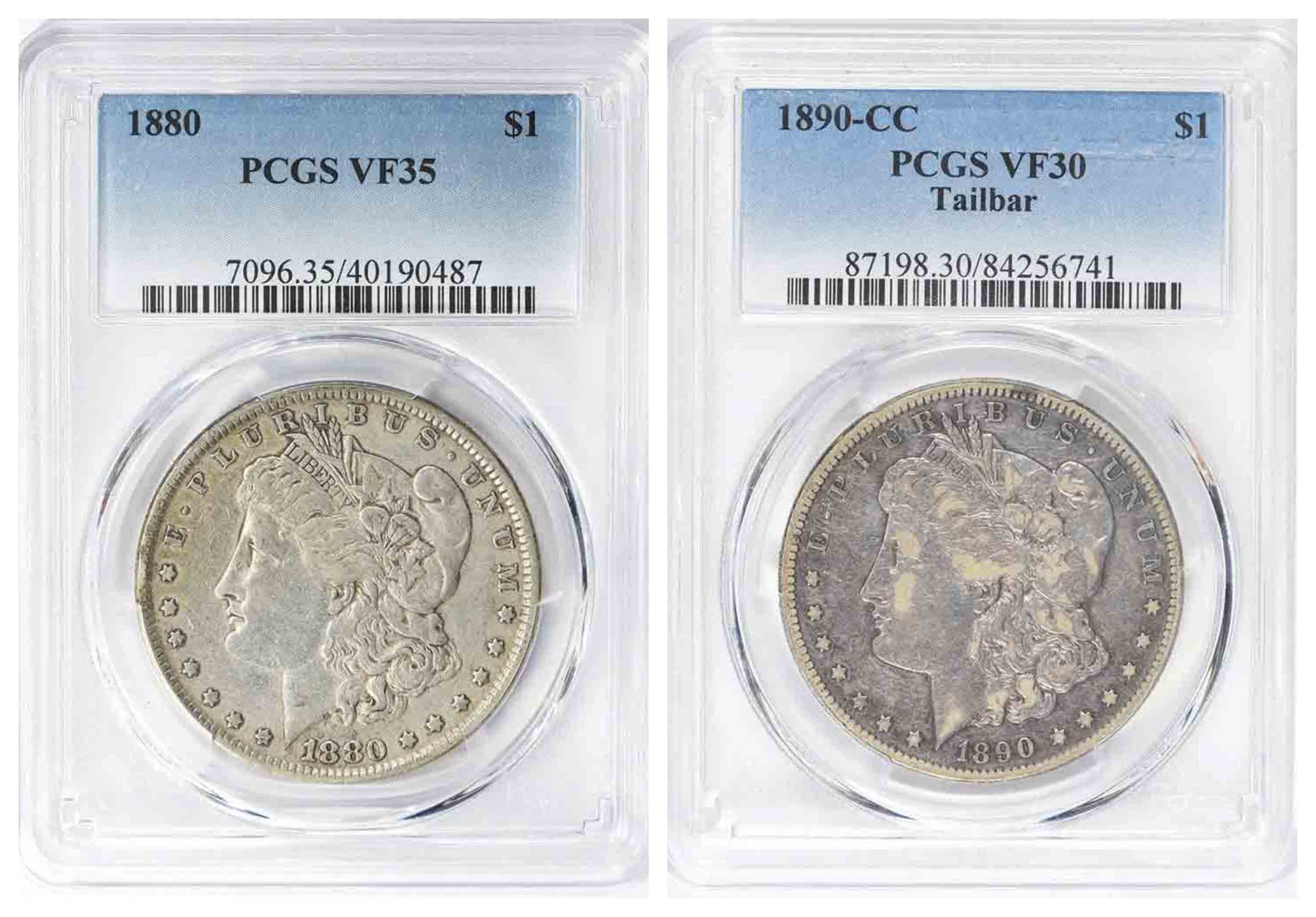 The 1882-O/S is barely perceptible. A microscope would be needed to be certain that any such coin really is an overmintmark variety. There is raised metal inside the ‘O,’ though concentration and thought are required to figure that the visible matter was part of a punched ‘S.’ Of course, this is interesting. The 1882-O/S just should not be listed as if it is a major variety.

Curiously, the 1890-CC Tailbar Reverse variety is very much apparent without magnification and does capture the attention of anyone who has carefully examined many Morgan dollars. Though not really a requirement for a set by date, as the Tailbar is unrelated to the numerals, mintmark or design type, a coin of the Tailbar Reverse variety might be a very unusual and entertaining supplement.

Although the 1900-O/CC is definitely a true overmintmark, the CC is faint even on choice to gem quality coins. On Very Fine grade coins, concentration and knowledge are needed to discern it. Certainly, this overmintmark is not apparent enough for the 1900-O/CC variety to qualify for the status of a date in addition to a regular 1900-O.

Subscribe to April 2021 edition of CPG Market Review for the industry's most respected pricing and to read more articles just like this.

I did a Dansco album date set of VF-XF Morgans, and it was a very pleasurable task. The 93-95s were the only relatively pricey ones. Oddly enough, it was tough to find a 21 in a pleasing VF-XF..... LOL