It is not often that a museum-caliber collection comes to auction that was formed over five decades by the founder of a museum. John Herzog is well known in the numisma 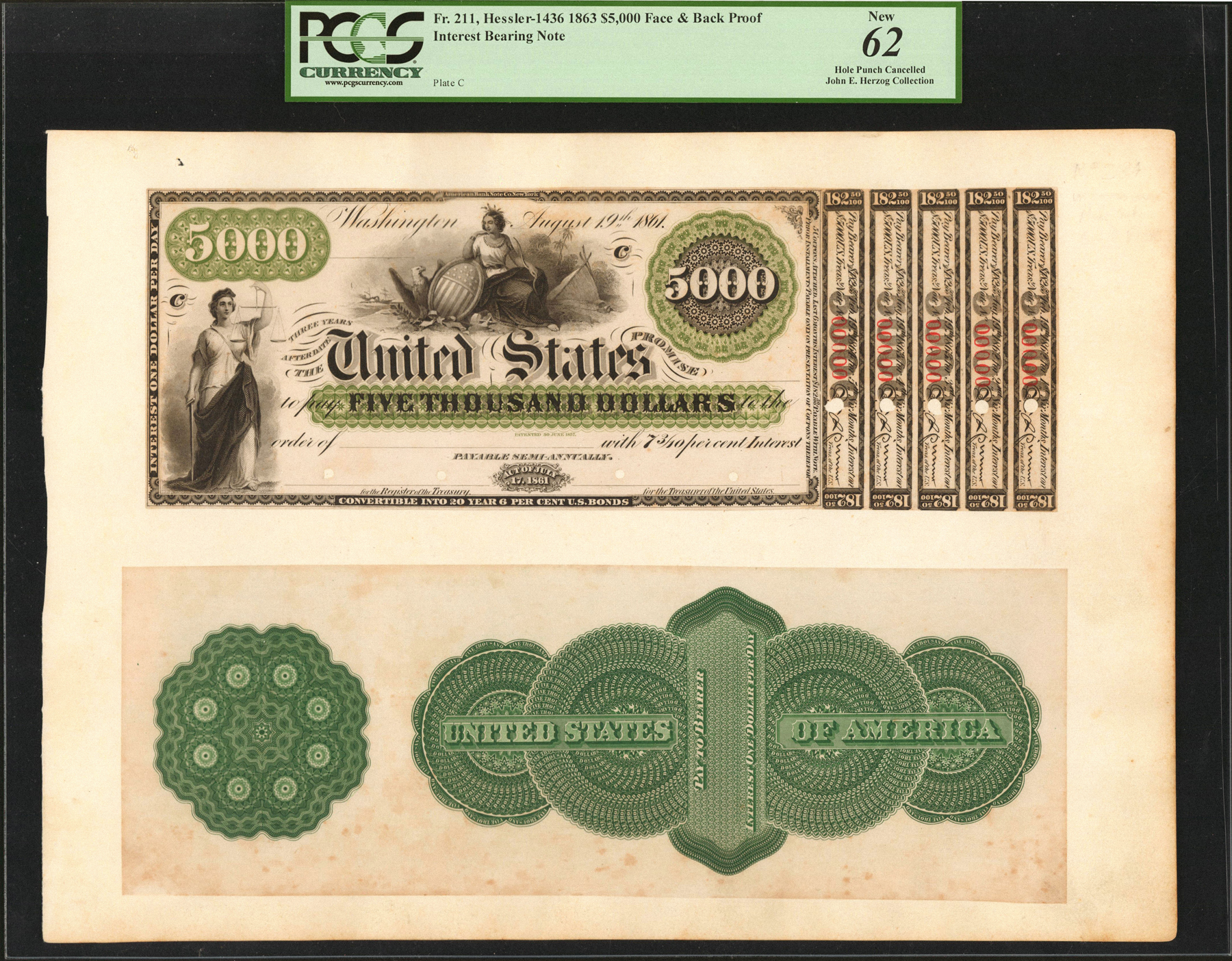 It is not often that a museum-caliber collection comes to auction that was formed over five decades by the founder of a museum. John Herzog is well known in the numismatic community through his charitable pursuits and on Wall Street as the founder of the Museum of American Finance. Mr. Herzog’s career as a stockbroker trading over the counter on the NASDAQ helped establish it as a leading global exchange. Mr. Herzog’s passion for financial history and the development of the capital markets in America from under the Buttonwood Tree onward evolved into his devoted interest in the documents and certificates associated with those events. Often, it was not an item’s intrinsic value that was important, but the fabric of economic history it contained.

The Stack’s Bowers Galleries sale of the John E. Herzog Collection of United States Loan Certificates 1837-2000 presents an important opportunity for collectors to compete for exceptional, historic items that are rarely offered publicly. Many of the pieces in the collection have traded hands once in a generation, if that, and often have provenances to illustrious collectors. Many items were purchased privately from well-known dealers over the past 50 years or through Mr. Herzog’s obsolete securities and financial history firm, R. M. Smythe & Co. (which later acquired the NASCA numismatic auctions brand), headquartered in the Standard Oil Building at 26 Broadway.

The collection itself contains hundreds of individual items, from extremely rare United States Federal Interest Bearing Note Proofs to colorful postcards and other ephemeral pieces that relate to a specific bond or document. Most of the items themselves evolve from war and conflict, and the methods necessary to fund them. Commencing in 1836, the items in the collection provide an overview of the American financial landscape from the Mexican War-era loans, the apportionment of Federal lands to war veterans (“40 Acres and a Mule”), the Union financing of the Civil War, the aftermath of these events, the beginnings of American foreign expansion, the Spanish American War, the Liberty Loans of World War I (which inspired individual patriotic Americans to invest in smaller denomination loans for the war effort), and the development of Savings Bonds and other later 20th-century Federal loans for individual investors. Many of the collateral items in the collection contain patriotic imagery.

Highlights from this cabinet are numerous, and several items are apparently unique based on research by Mr. Herzog and Stack’s Bowers Galleries. The earlier 1837-1850 period Treasury Notes and loan certificates display amazing artistry from the New York engraving firms, prior to the United States government’s establishment of its own security printing apparatus. Several of these loans originated in the 1982 Alexander Vattemare Albums’ auctions at Robson-Lowe (Christie’s), and were off the market afterwards for a significant period. The circa 1847 $5,000 Treasury Note Hessler X115 Specimen is one of the major highlights in the Herzog Collection. It arguably merits a Friedberg listing as a type note and is not unlike the high-denomination Interest Bearing Notes issued in the Civil War that reside in the “middle of the book” of Friedberg. The Civil War-era notes and bonds are impressive. There are several important Friedberg-listed Interest Bearing Proofs, including the finest complete $5,000 Fr. 211 (the “7-30” Act) Color Proof face and back pairing with all coupons and a $1,000 Fr 210 “7-30” Color Proof face. All were redeemed and these Proofs are the only way this type may be obtained. Loan certificates include a $1,000 Loan of 1862 bond issued to the First National Bank of Washington, D.C., to back up their circulation of the first Original Series National Bank Notes. There are also choice issued coupon loan certificates from the 1861 and 1862 acts.

The certificates and documents from after the Civil War illustrate changes in American domestic and foreign policy. There are two issued 1867 Consol loans and a fine copy of the related 1869 American Bond Detector published by Laban Heath. Other bonds from the 1867-to-1900 period include specimen coupon loan certificates for the Kingdom of Hawaii (annexed by the United States for economic and strategic purposes) and Cherokee Nation Department of the Interior specimen bonds. Loans from the Spanish American War period commenced low-denomination registered and coupon bonds sold to the general public. These were pre-cursors to the Liberty Loans system that provided financing for World War I.

The collection of United States Liberty Loans issued from 1917 to 1919 is the finest assembled for a public auction sale. It represents loans from the many different series, coupon types, and sizes sold to general public and larger investors. The sale of these bonds to the public inspired patriotism, along with posters, propaganda, and art that is collected by many mainstream collectors. The certificates were printed at the Bureau of Engraving and Printing and reflect the engraving style seen in the transition from large-size currency to the soon-to-be-issued small-size notes in 1929 that we use today. Also of particular note a serial number 1 $50 Gold Bond of 1933-1938 with all coupons, offered at public auction for the first time.

There are several other 20th-century bond genres in the Herzog Collection, including Postal Savings coupons bonds, Clearing House certificates relating to the establishment of the Federal Reserve system, United States Savings Bonds and Specimens, United States territorial bonds, and issues into the late 1960s. Additionally there are modern certificates related to famous institutions such as “Fannie Mae” and the Savings and Loan Crisis. Overall, the broad sweep of over 150 years of American finance is contained among the many Treasury Notes, Loan Certificates, documents, and ephemera that comprise this fine cabinet. As each piece finds its way into a new collection it brings with it an elite pedigree and a historic story to tell.

Stack’s Bowers Galleries will be presenting the John E. Herzog Collection at their Official Currency Auction of the ANA World’s Fair of Money on Tuesday, August 14, 2018, at the Pennsylvania Convention Center in Philadelphia. Lot viewing will be available prior to the convention at the firm’s California and New York City locations, as well as at the Pennsylvania Convention Center beginning on August 11. For further details, visit StacksBowers.com or call 800-458-4646.