A 96.65-ounce Kellogg & Humbert gold ingot from the shipwreck S.S. Central America led all lots at $216,000 in Kagin’s March 11-12, 2021 Auction. Originally projected to be live at the ANA National Money Show in Phoenix, Arizona which was cancelled due to Covid-19 issues, the auction was instead held in the San Francisco Bay Area on the same weekend. “I was quite pleasantly surprised by the fact that this bar sold for almost 60% over melt which is a substantial premium for these ingots.” Said Don Kagin, owner and president of Kagin’s Auctions. “It demonstrates that it’s the story behind these numismatic artifacts that dramatically drives their value”. 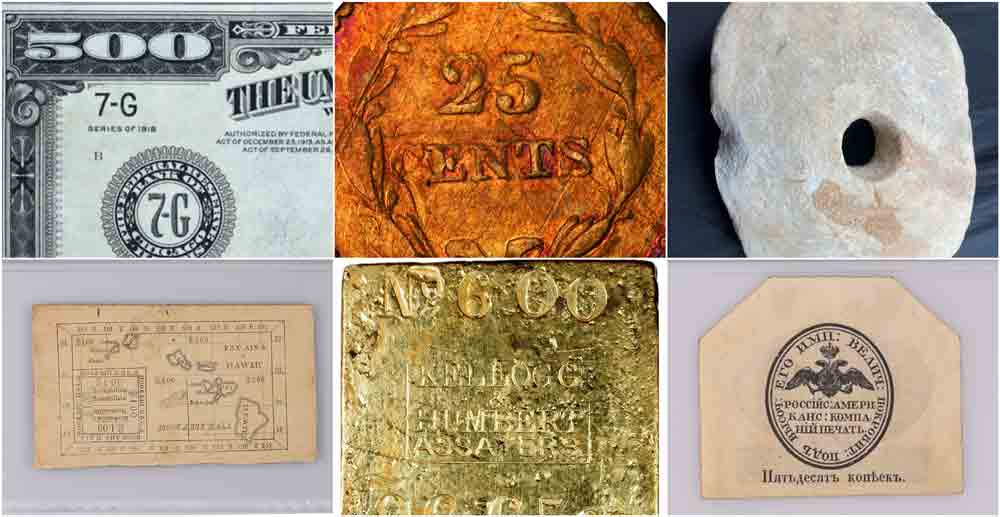 The same can be said of the 79 lb. Yap stone. One of the most popular “Odd & Curious” or “Primitive Money” series, these relatively round limestone looking stones were introduced in the 18th century with central holes for carrying. Originally quarried with primitive stone tools, they were quarried on the Island of Palau, drifted out to sea on large bamboo rafts and transported to the Island of Yap by canoe. This largest of three specimens in the Kagin auction was 21 ¾” in diameter and brought a record $30,000 with the 20% Buyer’s Premium.

Record prices were not limited to Large Money and in fact a tiny (by comparison) 25c California Fractional Gold piece from the famous William C. O’Connor Collection realized a record $50,400 including the 20% buyer’s premium after fierce bidding. This 1854 “Defiant Eagle” Type BG-220 is one of the most coveted designs of all California Fractional Gold Period One issues. It had not traded hands in almost 40 years and its pedigree could be traced back to California Gold Rush U.S. Assayer, Augustus Humbert.