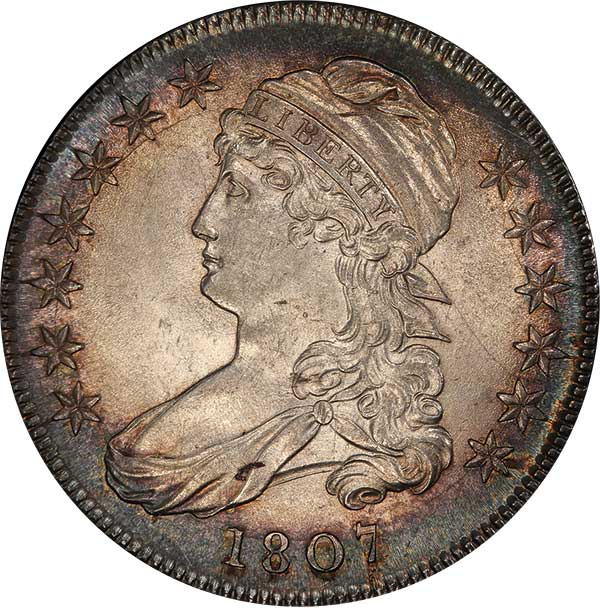 Legend Rare Coin Auctions is proud to announce the very strong results of 28th Regency Auction. After 28 Regency Auctions, held as the official auctioneer of the PCGS Members Only Show, Legend has more than proven that their boutique-style auctions bring out the most serious buyers and coins consigned bring in prices that exceed similar coins at other auction companies. Featuring 665 hand selected, high-quality rare coins, this was the second auction in the firm’s history that required two sessions to present the wide variety of important, historic, and rare coins. Like the firm’s May Regency Auction, the first day’s auction focused on a single denomination, this time being half dollars. The second day of the Regency Auction featured half cents through patterns.

Half Dollar Day, as it was dubbed, proved that half dollars, “could bring big dollars,” as Laura Sperber put it. The surprise of the session was when lot 172, a monster-toned 1958 Franklin half, arguably one of the finest examples of the entire series rocketed out of the stratosphere with a final bid at $129,500, setting a world record for any Franklin half dollar! However, the session was anchored by two important collections, of very popular series. Starting off the Session was the famous Konstantine Collection, the #1 PCGS Registry set of Capped Bust Half Dollars, 1807-1836, featuring the major “Red Book” varieties. This was the first time that we could ascertain that such a set of the 73 major varieties were sold in a single auction, and the results proved to be very strong, thrilling the consignor and all the successful bidders alike, as they were able to acquire some once in a generation coins. Coins like lot 1, the beautiful, Bearded Goddess, which was previously in the Norweb Collection, now graded PCGS AU53 CAC and is among the three finest known kicked off the fireworks when several Bust Half Nuts bid it to $58,750 from an opening bid of $33,000. (Note: all prices realized include the firms 17.5% Buyer’s Premium).

“From the moment the Konstantine Collection was announced back in July, every major collector of Bust halves has been waiting for this auction,” said Julie Abrams, president of Legend Auctions. “We took out all the stops in the marketing efforts, including hosting a small gathering of collectors during the ANA show in Philadelphia, where every coin was on display. The event was very well attended by the ‘who’s who’ among serious collectors. These efforts proved to get the strong action going, with a standing room only crowd who came out to the auction to bid in person. This record attendance was led to the impressive list of prices realized below.”

Highlighted results of the Konstantine Collection include:

“In all, when the hammer fell on lot 73, over $1.3 million dollars were spent on Capped Bust half dollars,” explained Laura Sperber, founder of LRCA. She noted, “for nearly two months, the entire market has been buzzing with excitement for these coins, so going into the session, I knew the Konstantine Collection was going to bring very strong to beyond strong money. My expectations were quickly blown away!”

The Sommelier Collection of Early Date Walking Liberty Half Dollars was the second anchor collection, and when the hammer gaveled the last lot, the 25 coins realized over $400,000! Julie Abrams was sitting in the back of the room when the collector “looked back at me at one point and just smiled and gave a huge ‘thumbs up.’” Clearly, they should be happy, just take a look at these amazing results:

The session ended with additional Walking Liberty, Franklin and Classic Commemorative half dollars from various consignors. Franklin half dollars have really become a very popular series recently. Whether the market for them is maturing and realizing enough time has passed that they can now be considered a classic series in the annals of American Numismatics. Either way, there are many serious collectors vying for the very finest. Two such coins were offered in the Half Dollar Day auction session, far surpassing any previous records, and bringing prices that are just way beyond “moon money”! The first was the aforementioned record shattering realization of $129,500 for the magnificent and wildly toned 1958 and the finest 1949-S half dollar, also graded PCGS MS67+ FBL CAC realized $31,725.

The second session of the 28th Regency Auction took place on Thursday evening, September 27. You could sense the how active bidding was going to be the moment the sale opened, as many collectors added great coins to their collections. Twentieth-century coins, had great results overall. The Hallett Collection of Mercury Dimes, the current #5 and all time #9 Registry set brought impressive prices. “It is not often that a top 10 Registry Set comes up for auction, and the prices prove that when a great collection comes up, the buyers run out to buy the coins. In many cases our estimates proved way too low,” Julie Abrams said. The surprise of the collection was lot 367, the PCGS MS67+ FB CAC 1925 dime that realized $25,850 on an estimate of $3,500 to $4,000. Other Mercury dimes consigned alongside the Hallett coins fared extremely well, with beyond moon money realized for multiple coins including. Overall the prices were indicative of the overall market, with great coins selling for great prices.

Highlights of the second day’s session include:

Laura Sperber noted after the last lot sold on Thursday evening, “The market is continuing to show renewed strength, as new, well-healed collectors are building epic collections. Whether they are working on one set, or many different projects, if they see a coin they need, they just go after it. In the current environment, clearly PCGS/CAC coins were bringing the absolute strongest realized prices throughout the auction. These collectors equate PCGS/CAC with the best quality coins.”

“The market for high-quality rare coins is healthy, robust, and we are seeing lots of new names and faces. The public turnout at the PCGS Members show was very large, larger than normally seen. We know with so few opportunities going into the last months of 2018, there will be only a few more opportunities to buy great coins. Legend’s 29th Regency Auction, being held of November 15 in San Antonio will be one of the last, and we have lots of great coins consigned to that sale,” noted Julie Abrams. “Consignments are now closed, but we are always taking consignments for upcoming auctions, so give us a call. Our boutique auction venue gets the best prices for the best coins!”