Peace dollars are one of the most underrated United States silver coins of the 20th century. 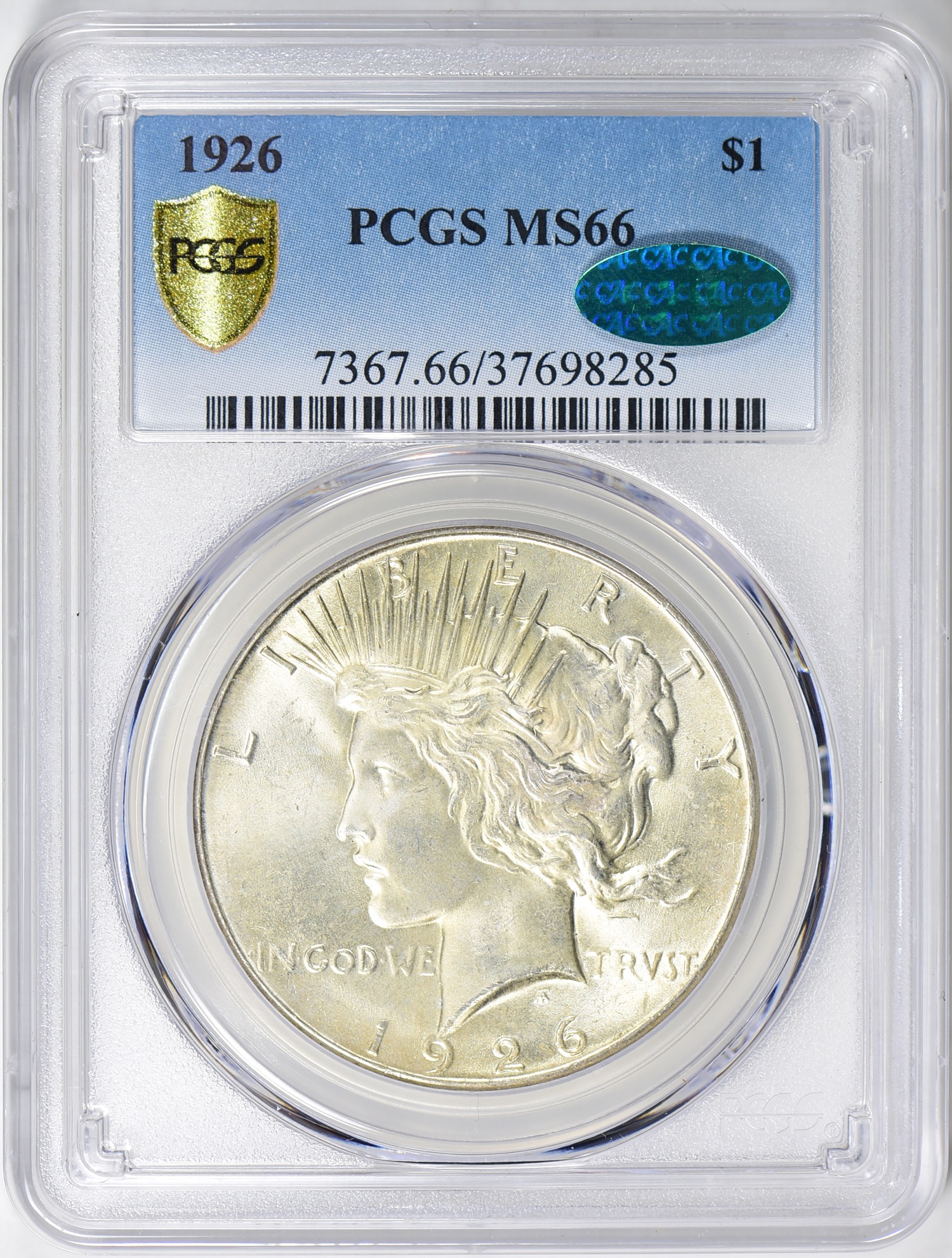 Ask coin dealers and hobbyists about their favorite silver dollars, and they’ll most likely share short stories about Flowing Hair dollars, tall tales about the famous 1804 Draped Bust dollar, or anecdotes on Carson City Morgan dollars. Chances are, they won’t say much about Peace dollars. Turn to the Peace dollar price listings in Coin Dealer Newsletter and the evidence becomes even clearer. Peace dollars are one of the most underrated United States silver coins of the 20th century.

Arising in the dawning days of the Roaring ’20s, the Peace dollar became America’s tribute to new hopes for a tranquil future amid the fresh aftermath of The Great War, known more commonly these days as World War I. Perhaps the peace treaties and sociopolitical goodwill gestures of the 1920s didn’t prevent the Second World War or any of the bloody conflicts that followed, but the Peace dollar is no less a meaningful symbol of domestic and international concord today.

Coin dealers looking for a selling point with Peace dollars can always offer up the story behind its design, designer, and the artist’s young and beautiful muse. Collectors who already know the coin’s history enjoy Peace dollars not only for their for their colorful backstory but also their largely unadvertised reputation as a (deceptively) challenging series.

The Peace dollar is a classically American coin with a patriotic design and unique narrative. It was designed and first minted in 1921 during the end of a numismatic period many call “The Renaissance of American Coinage.” It was an era that began around 1905, when then-President Theodore Roosevelt called for a redesign of the nation’s coinage, which he felt, in his own words, were “artistically of atrocious hideousness.” His comments spurred a rush of new, Liberty-inspired designs and other patriotic artwork that touched every then-circulating denomination, including the dollar coin in 1921.

Italian-born sculptor Anthony de Francisci was chosen to design what numismatist Farran Zerbe labeled a “peace coin” after winning a competition in which he and seven fellow prominent sculptors were asked to participate. Modeling for the profile of Miss Liberty on the coin was de Francisci’s young wife, Teresa, who was in her early 20s when her husband transformed her youthful profile into an artistic design composed of facial features that he said, “typified something of America.”

Choosing his wife as the coin’s model was in part necessary due to the rapid process in producing the coin. Francisci, unable to find a professional model for his coin in a timely fashion, lovingly chose his wife to pose for the coin. When she was a young girl, Teresa de Francisci née Cafarelli spotted the iconic statue standing tall in New York Harbor upon sailing to the nation from her native Italy in steerage class with her mother. Cafarelli was awed by the statue and enjoyed imitating its classic pose, and she had her eyes set on a role in a patriotic school play in which she hoped to play Lady Liberty. She lost the school role to another young girl but even long after her death at 92 years old in 1990, her face will be forever cast as Miss Liberty on the Peace dollar.

The Peace dollar type took the stage as the last circulating, large-size dollars made in the United States with a 90 percent silver composition. Yet, even with its shining history, the Peace dollar settled in the shadows of its more popular, senior counterpart, the Morgan (or “Liberty Head”) dollar, designed by namesake sculptor-engraver George T. Morgan and produced from 1878 through 1921.

BUILDING A SET OF PEACE DOLLARS

The Morgan dollar gained an aura of romance for collectors who waxed nostalgic about the coin’s ties to the Old West. Morgan dollars also offer a wide variety of popular key dates and rare varieties that can keep collectors on their toes for years, even decades. Collectors routinely spend tens of thousands of dollars cobbling together the 97 coins that are required to complete even a basic Morgan dollar date-and-mintmark set. Throw in the varieties as well as the proofs, and the number of coins necessary to complete a set, as well as the money needed to buy them, more than doubles.

The Peace dollar series, ending in 1935, fell just one year short of what would have been presumably a proof year for the coin, as the first of the “modern” proof sets were released in 1936. However, matte proofs are known for the 1921 and 1922 Peace dollars and they are very rare, running into the low six figures for a decent specimen.

There are also a few popular varieties, including the 1934-D doubled die and 1934-D with a larger, filled “D.” The following year, San Francisco produced specimens with either three or four rays under “ONE” in the denomination, and 1935-S silver dollars of each variety is worth about the same as the other.

Meanwhile, many collectors dream about finding one of the 316,076 circulation-strike 1964-D Peace dollars that were ordered by the Lyndon B. Johnson White House to be completely destroyed. Rumors fly that a few may exist, even though they are illegal to own.[1]

There are but a couple of regular-issue Peace dollars that count as scarce semi-keys or key dates in terms of overall scarcity. None of the regular-issue coins are rare, unless counting conditional rarities in the grades of Mint State 66, 67, or above (depending on the specific date).

While the most valuable regular-issue Morgan dollar ever sold, an 1889-CC specimen graded Mint State-68 by the Professional Coin Grading Service (PCGS), took $881,250 at an August 2013 Stack’s Bowers auction[2], the most expensive Peace dollar hasn’t yet even cracked into the six-figure territory. A Mint State-68 example of the 1925 Peace dollar, also graded by PCGS, became the priciest Peace dollar when it sold at a Heritage Auctions sale in August 2011 for $89,125. That’s a respectable sum to be sure, but it’s barely more than a tenth of the most valuable Morgan dollar. [3]

Contrasting the Peace dollar and the Morgan dollar, it seems the two series are in many respects dichotomous. And the collector who makes that determination would be largely correct. But it’s in those disparities between the two silver dollar series where opportunities lay for coin collectors who want to complete a set of the classic Peace dollars without breaking the proverbial bank.

Coin dealer Larry Shapiro specializes in Morgan dollars and Peace dollars, handling some of the rarest specimens known. The Palos Verdes, California, dealer also enjoys silver dollars as a collector. “I collected Morgans from the time I was a kid, and when I was finished with that set I thought I could put together a nice set of Peace dollars in a weekend.”

Like him at one point, many hobbyists initially unfamiliar with the Peace dollar series believe its short date run and overall relative affordability mean finishing the series is more of a tack-on pursuit to building another, perhaps related, set. “So wrong,” admits Shapiro of his early thoughts on collecting the series. “It took me over five years to put together a nice set,” says the dealer who handled a very elusive 1928 Peace dollar grading Mint State-66 (with a population of 1) and helped others build several Top 10 registry sets. “It’s very difficult to put together a nice set of white Peace dollars without major distractions.”

Peace dollars, like Morgan dollars and other large coins, are susceptible to contact marks due to their heavy weight and broad surface area. Most uncirculated specimens grade under Mint State-65. The majority of uncirculated Peace dollars tend to grade in the Mint State-62 to Mint State-64 range. The relatively bare obverse field around the central figure and broad, highly exposed cheek of Miss Liberty are notorious for receiving detracting hits, nicks, and scratches. This doesn’t except the reverse, dominated by a depiction of an American Bald eagle on a mountaintop and sunrays. The reverse, also, receives its own share of surface abuse, even though some small marks may hide fairly well in the detail of the eagle, the mountain, or tightly clustered rays near the word “DOLLAR.”

“There are so many things to consider when looking at a Peace dollar,” Shapiro says of grading the coins. “They have lots of die cracks and other mint-made issues.” He states a major problem is when toning obscures bag marks, the presence of which can easily knock a Peace dollar one or more grading points, based on their size, location, and number. Weak strikes also complicate grading. “Typical weak strikes on the S-mint [San Francisco] coins. There’s no such thing as a full strike on a 1921 or 1925-S.”

One of the coins Shapiro says is the toughest to find in a high grade also reigns as his favorite. “The 1934-S – it’s tough to find a blast-white coin with a decent strike,” he says. “Most 1934-S coins have some type of toning, which 98 percent of Peace [dollar] buyers do not want.”

Despite the inherent difficulties of finding exceptional uncirculated Peace dollars, he believes they are among the best buys in the series. “About three years ago Peace dollars were very hot, but a few dealers took their bids down and that hurt. Peace dollars are down now, and they’re a very good value.” He believes the nicer uncirculated coins are an especially good buy now across the board. “It’s a great time to put together a set of [Mint State] 64-66 coins.”

Mint State-64, -65, or -66 Peace dollars retail for a general minimum of $75 to $500, and some latter dates in MS-66 easily top $30,000 apiece. Shapiro says those who can’t afford high-priced Peace dollars should look to more affordable, yet better material. “Buy the best coin for each date that you can afford.” He also adds this advice: “Don’t save the most expensive ones for last, as the market could go back up and you will pay more.”