Money of the Celts – The Flesche Collection at Künker

The second part of Künker’s Spring Auction Sales is completely dedicated to antiquity. In addition to many collections of Greek, Roman Republican, Roman imperial and late Roman coinage, a collection with world-class Celtic coins will be on offer: the Flesche Collection.

The material on offer in the second part of Künker’s Spring Auction Sales from 4 to 6 April 2022 is presented by three auction catalogs with a total of more than 2,000 lots of ancient coins. Every lover of ancient coins will spot his favorite pieces in these three auctions. Several interesting collections will be sold at once: auction 365 offers the Dr Albrecht Ullrich Collection with late Roman gold coins and the collection of a connoisseur with Roman coins including many rarities and a wealth of high-quality sesterces. Auction 366 is dedicated to a spectacular collection of Celtic coinage – collections like this one only enter the market once every few decades. The Flesche Collection contains what is readily described as “showpieces”, and, indeed, the collection has been on display already in 2010 at the Munich State Coin Collection. Auction catalog 367 covers no less two collections: the Dr Guy Sylvain Paul Bastin Collection with Greek and Roman coins of wonderful quality and part 6 of the Dr W R Collection with Roman Republican coinage.

Catalog 365: Coins from the Ancient World

The second part of the Spring Auction Sales starts on 4 April with auction 365. It contains coins from the ancient world from various consigners, including some large collections. This auction covers the complete spectrum of ancient numismatics: Celts, Greeks, Romans, Byzantium and a few pieces of the Migration Period and the Orient.

As an example for the quality of the Greek coins on offer, we would like to draw your attention to a quintuple shekel or rather a decadrachm of the Carthaginians, minted in an unknown Sicilian mint. The extremely rare specimen graded “very fine +” depicts a Pegasus on the reverse. Another highlight of the about 150 lots with Greek coins is an about extremely fine distater by Alexander the Great, minted during his lifetime by a Macedonian mint.

Added to attractive denarii and cistophori, the section of coins from the Roman Empire offers numerous aurei graded very fine to FDC, and an extensive series of exceptionally well-preserved sesterces – not only from the first and second but also from the third century. In addition to issues of Caligula, Claudius and all other male and female members of the Julio-Claudian and the Flavian dynasties, experts will also spot rarities such as a sestertius of Aelius and a double sestertius by Herennia Etruscilla.

A particularly rich selection of late Roman and Byzantine coins from the period after the death of Constantine the Great stems from the Dr Albrecht Ullrich Collection, who paid special attention to the perfect quality of his pieces during his many years of collecting coins. 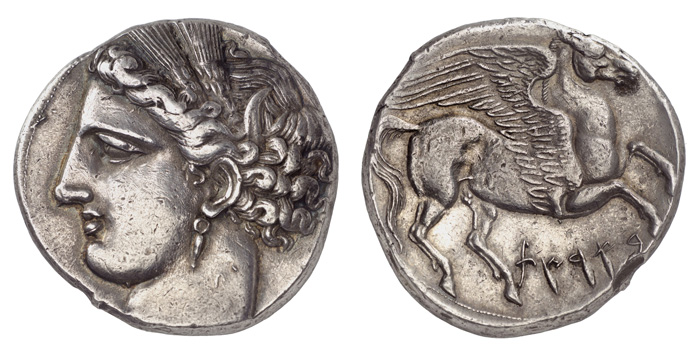 Catalog 366: MONEY OF THE CELTS – The Christian Flesche Collection

“This collection is a broadly designed cross-section of Celtic coinage and offers a selection of top-class key pieces of the finest and best of Celtic coin art. The specimens impress due to their select quality, great rarity and extraordinary historical significance. ... The collection covers the entire spectrum of Celtic coinage made from all coin metals, form bronze to silver and gold. ... The large volume of gold coins (more than 25%) is remarkable, just as the quality of perfectly minted bronze coins, which can rarely be found in this quality as they were used as everyday objects throughout history.” No, this was not written by an advertising copywriter but by Dr Rainer Cunz, then chairman of the Numismatic Commission of the Federal States of Germany, who has seen a lot of important collections.

The Christian Flesche Collection of Celtic coins truly is a world-class collection. And the collector was able to experience the joy of having one of the best experts in Celtic numismatics, Dr Bernward Ziegaus, review the material for the scholarly world and, what’s more, curate an exhibition of these pieces at the Bavarian State Collection of Coins in Munich on the occasion of the completion of the publication.

Those who visited the exhibition in 2010/11 will remember the almost unbelievable quality of the material. One of the pieces shown then is still unique today. Dr Christian Flesche and the coin dealer Alois Wenninger, who assisted him, jointly enjoyed the perfectly preserved coins, whose motifs – as can be read in the exhibition brochure – “are characterized by a ‘primitivism’ that leans towards ornaments and seems downright modern today, being reminiscent of modern artists such as J Dubuffet or A R Penck.”

Make your own judgement. Leaf through the incredible catalog. And if you are interested in the historical background of the coins, you should definitely buy the catalog of the Flesche Collection written by Bernward Ziegaus. His book is one of the best works on Celtic coins written in German. 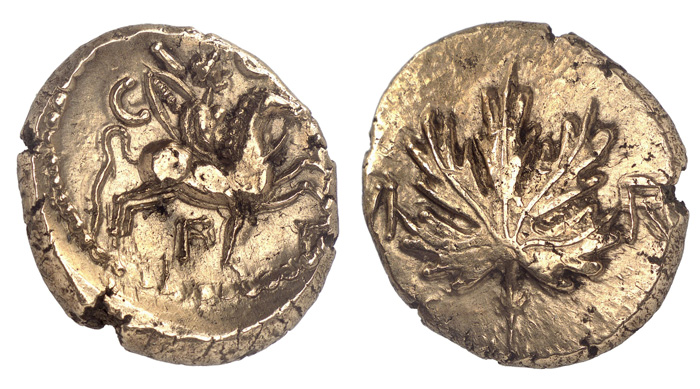 No. 6119: Gallia. Gold stater after the model of the staters by Philip II. Type “Gamshurst”, 3rd century BC. Very rare. About extremely fine. Estimate: 7,500 euros

No. 6535: Pannonia. Tetradrachm, type with curl on the cheek, 3rd century BC. Rare. About extremely fine/very fine. Estimate: 10,000 euros

Künker’s Spring Auction Sales will end on Wednesday, 6 April 2022 with the sale of two more collections. First are the coins of the Dr Guy Sylvain Paul Bastin Collection. He collected all the favorite pieces of collectors of Greek coinage in outstanding quality.

It’s best to use the internet to really appreciate the quality of these pieces by zooming into the pictures. Let’s have a look at one example: staters of the archaic coinage system from Sybaris are already rare to begin with. But the collector managed to acquire not a stater but a drachm from Sybaris – these coins are even rarer than staters. The specimen is of wonderful quality and has a good provenance. It’s from the Bank Leu auction 36 of 1985.

Or the incredible didrachm from Gela that first entered the market in 1987 at Lanz! The piece is not only of perfect quality, it was also made with a fresh die which is why it is one of the few existing didrachms from Gela that depict every detail of the horseman on the obverse. The third and last example for the exquisite taste of the collector is a coin minted during the Roman siege of Syracuse. The obverse depicts an almost monumental face of Zeus and the reverse a quadriga. The engraver managed to capture the moment in which all four horses start moving from a standing position in a very lifelike manner.

Dr W R succeeded in acquiring rare pieces of extraordinary quality. He paid special attention to motifs of historical interest that allude to events that are second nature to any graduate of humanistic grammar schools thanks to extensive Latin lessons. It’s incredibly impressive to see how a large M. Aemilius Lepidus puts the diadem of the rule over Egypt on the head of the much smaller Ptolemy V.

For the sake of completeness, it should be mentioned that prices for the specimens of this collection already start in the two-digit range. If you are interested in coins of the Roman Republic, you should not miss taking a close look at this catalog.