It’s little surprise that the Lincoln cent, which replaced the Indian Head cent (1859-1909), drew praises not just by nostalgic coin collectors, but also from people who remembered, and still missed, the iconic commander in chief. 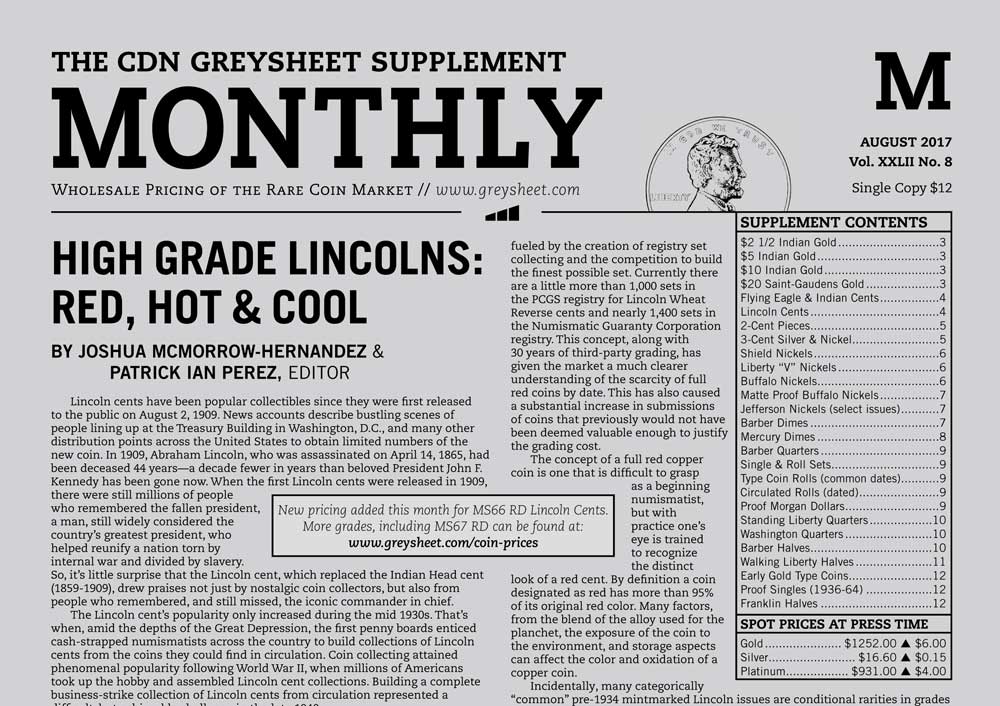 Lincoln cents have been popular collectibles since they were first released to the public on August 2, 1909. News accounts describe bustling scenes of people lining up at the Treasury Building in Washington, D.C., and many other distribution points across the United States to obtain limited numbers of the new coin. In 1909, Abraham Lincoln, who was assassinated on April 14, 1865, had been deceased 44 years—a decade fewer in years than beloved President John F. Kennedy has been gone now. When the first Lincoln cents were released in 1909, there were still millions of people who remembered the fallen president, a man, still widely considered the country’s greatest president, who helped reunify a nation torn by internal war and divided by slavery. So, it’s little surprise that the Lincoln cent, which replaced the Indian Head cent (1859-1909), drew praises not just by nostalgic coin collectors, but also from people who remembered, and still missed, the iconic commander in chief.

The Lincoln cent’s popularity only increased during the mid 1930s. That’s when, amid the depths of the Great Depression, the first penny boards enticed cash-strapped numismatists across the country to build collections of Lincoln cents from the coins they could find in circulation. Coin collecting attained phenomenal popularity following World War II, when millions of Americans took up the hobby and assembled Lincoln cent collections. Building a complete business-strike collection of Lincoln cents from circulation represented a difficult, but achievable challenge in the late 1940s and 1950s. With enough dedicated searching, even the lowest-mintage business-strike date of them all, the 1909-S VDB penny (which bears on its reverse the initials of sculptor/engraver Victor David Brenner), could still be found in circulation. Other key dates, including the 1914-D, 1922 no-D, and 1931-S Lincoln cents also kept millions of collectors combing their pocket change. What’s more, in a seeming act of numismatic kismet, one of the most dramatic error varieties of all, the 1955 doubled die Lincoln cent, was released during the height of the hobby’s popularity. The first reported 1943 copper cents—extremely scarce off-metal errors minted when the U.S. Mint struck zinc-plated steel cents to save copper for the war effort—also surfaced.

By the time the last Lincoln Wheat Reverse cents were struck in 1958, the legendary series had firmly cemented its place in the numismatic world. Collecting Lincoln wheat cents remains as popular as ever, and although many casual collectors are still happy to fill their penny folders, advanced collectors focus on high grade—particularly full red—examples. This has been fueled by the creation of registry set collecting and the competition to build the finest possible set. Currently there are a little more than 1,000 sets in the PCGS registry for Lincoln Wheat Reverse cents and nearly 1,400 sets in the Numismatic Guaranty Corporation registry. This concept, along with 30 years of third-party grading, has given the market a much clearer understanding of the scarcity of full red coins by date. This has also caused a substantial increase in submissions of coins that previously would not have been deemed valuable enough to justify the grading cost.

The concept of a full red copper coin is one that is difficult to grasp as a beginning numismatist, but with practice one’s eye is trained to recognize the distinct look of a red cent. By definition a coin designated as red has more than 95% of its original red color. Many factors, from the blend of the alloy used for the planchet, the exposure of the coin to the environment, and storage aspects can affect the color and oxidation of a copper coin. 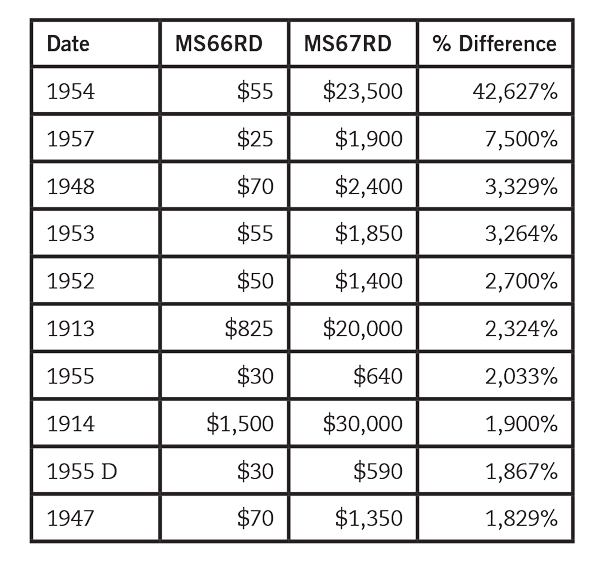 Perhaps the biggest epiphany Lincoln cent collectors have experienced since the advent of registry set collecting is that the “real” regular-issue rarities in this long-running series aren’t necessarily 1909-S VDB pennies. In many cases, they are the issues that many Lincoln enthusiasts, fixated on collecting the popular key dates, sometimes tend to overlook. Consider, for example, the 1913-S Lincoln cent in MS-67 Red. This coin, a semi-key date in any grade, is one of the rarest Lincoln cents around—even rarer than, collectively, the Philadelphia, Denver, and San Francisco bronze cents of 1943 bronze cents, in terms of population figures. PCGS reports just two 1913-S MS-66 Red exist. These are worth a whopping $47,200 according to the CDN Collectors Price Guide (CPG), which is less than half of what one would pay for a “typical” example of a 1943 bronze cent, which usually trades for upward of $100,000 these days when an example hits the market.

To be sure, many of the rarest Lincoln cents aren’t the coins most collectors read about in the numismatic headlines. Rather, they are “quiet” rarities—those that exist in tiny numbers but don’t get much press for a variety of reasons. As virtually any collector who is building a registry set of Lincoln cents will say, among the rarest Lincoln cents are mintmarked examples from the 1910s, 1920s, and very early 1930s grading MS-65 Red or higher. They are coins that, when new, were scarcely saved in uncirculated condition—not surprising in the days before the first penny boards popularized Lincoln cent date-and-mintmark collecting in the mid 1930s. Yes, the 1909-S VDB Lincoln cent is scarce in MS-67 Red, and according to PCGS only 15 exist; they’re listed at $82,600 on the CPG. But don’t forget the “other” rare Lincoln cents. These notably include the 1914-S, a semi-key issue in every grade that is downright rare in original, higher MS Red grades; PCGS reports just 3 exist in MS-66 Red and it’s listed at a whopping $94,400 in the CPG.

While the prices for some MS Red Lincolns may be downright staggering, some individuals might wonder what all of this data means in the greater context of long-term pricing trends. To answer that question, one must look at the historical price performance of Lincoln cents and the increasing awareness of conditional rarities as a whole; the market implications of the latter consideration still evolves as registry sets continue growing in popularity and certification services refine grading practices. On the whole, Lincoln cents are healthy, its market thriving well as are those for other perennially popular 20th-century series, including Buffalo nickels, Mercury dimes, Washington quarters, Walking Liberty half dollars, and Morgan dollars.

However, like many other series have also experienced, there are instances in which some Lincolns have taken price hits due to market fluctuations or, most especially in the case of the higher-grade certified issues, increasing population numbers. This is perhaps no better exemplified than in the case of the “Holy Grail” of Lincoln cents, the 1909-S VDB. To date, its value peaked around 2009, which was also, significantly, the 100th anniversary of the Lincoln cent series. Several events affected pricing for the series around that time, including the end of the Lincoln Memorial reverse subtype in 2008, the release of the four circulating Lincoln Bicentennial commemorative pennies in 2009, and—perhaps most importantly—fallout from the Great Recession following major collapses in various general market sectors from around 2007 to 2009 and even beyond. While the first two numismatic events mentioned bolstered interest in the series (and lifted sales numbers), the Great Recession pulled the bottom out from under prices for several classic coin series, including Lincoln cents.

According to auction records, 1909-S VDB cents grading Fine-12 traded for an average of $1,200 in the summer of 2009. Today, the CPG lists the same coin at just $719, reflecting a significant price decrease that doubtlessly is due to the massive selloffs of collections when the economic effects of the Great Recession spurred many newly unemployed individuals to sell their beloved coin collections for rent money and groceries. Looking higher up on the grading scale, that $82,600 1909-S VDB MS-67 Red cent discussed earlier in this article lists lower than the $117,500 an example commanded at a 2014 Heritage Auction sale. Back then, the 1909-S VDB had a PCGS MS-67 population of just 11; that number has since risen to 15, perhaps explaining, at least in part, the drop in price over the last three years.

Yes, there are many reasons the Lincoln cent series has captivated the interests of coin collectors for more than a century. It’s an accessible series with hundreds of regular-issue entries, many of which are classified as key or semi-key coins. And, as many individuals are learning with evolving grading and pricing data, this familiar series still has some pleasant surprises up its metaphorical sleeve. Indeed, many of these “pretty pennies” are truly rare and, by every measure, are often worth more than their weight in gold.