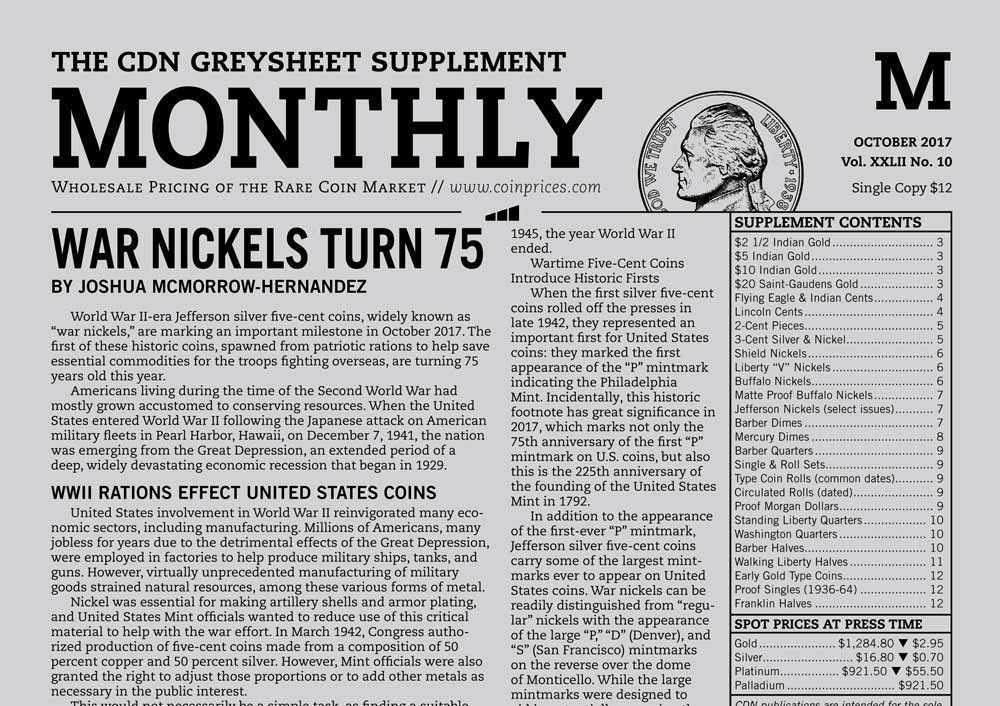 World War II-era Jefferson silver five-cent coins, widely known as “war nickels,” are marking an important milestone in October 2017. The first of these historic coins, spawned from patriotic rations to help save essential commodities for the troops fighting overseas, are turning 75 years old this year.

Americans living during the time of the Second World War had mostly grown accustomed to conserving resources. When the United States entered World War II following the Japanese attack on American military fleets in Pearl Harbor, Hawaii, on December 7, 1941, the nation was emerging from the Great Depression, an extended period of a deep, widely devastating economic recession that began in 1929.

United States involvement in World War II reinvigorated many economic sectors, including manufacturing. Millions of Americans, many jobless for years due to the detrimental effects of the Great Depression, were employed in factories to help produce military ships, tanks, and guns. However, virtually unprecedented manufacturing of military goods strained natural resources, among these various forms of metal.

Nickel was essential for making artillery shells and armor plating, and United States Mint officials wanted to reduce use of this critical material to help with the war effort. In March 1942, Congress authorized production of five-cent coins made from a composition of 50 percent copper and 50 percent silver. However, Mint officials were also granted the right to adjust those proportions or to add other metals as necessary in the public interest.

This would not necessarily be a simple task, as finding a suitable alloy that still works in existing vending machines and passes through counterfeit detectors yet contains no nickel would require some degree of experimentation. Officials eventually determined the best solution was to strike five-cent coins with an alloy of 56 percent copper, 35 percent silver, and nine percent manganese.

The five-cent piece wouldn’t be the only United States denomination affected by World War II metal rations. Copper, a material necessary for the production of ammunition, was eliminated from the one-cent coin. In 1943, the United States Mint struck Lincoln cents from a composition of steel coated with zinc. However, the coins proved highly susceptible to corrosion, were often confused with dimes, and were not consistently accepted in vending machines, leading officials to scrap the steel cent, the only regular-issue United States coin attracted to magnets, after just one year.

Conversely, Jefferson five-cent coins made from the 35 percent silver wartime composition were far more successful and widely well received than their steel cent counterparts. Jefferson war nickels were first struck on October 8, 1942 and remained in production through 1945, the year World War II ended.

When the first silver five-cent coins rolled off the presses in late 1942, they represented an important first for United States coins: they marked the first appearance of the “P” mintmark indicating the Philadelphia Mint. Incidentally, this historic footnote has great significance in 2017, which marks not only the 75th anniversary of the first “P” mintmark on U.S. coins, but also this is the 225th anniversary of the founding of the United States Mint in 1792.

In addition to the appearance of the first-ever “P” mintmark, Jefferson silver five-cent coins carry some of the largest mintmarks ever to appear on United States coins. War nickels can be readily distinguished from “regular” nickels with the appearance of the large “P,” “D” (Denver), and “S” (San Francisco) mintmarks on the reverse over the dome of Monticello. While the large mintmarks were designed to aid in potentially removing the emergency silver five-cent coins from circulation following the war, that never happened. In fact, war nickels still appear in circulation from time to time.

The 35 percent silver war five-cent coins also represent another important milestone for United States coinage. They became the first regular-issue U.S. coins of the five-cent denomination to contain silver since 1873 when the last half dimes, which also carry a face value of five cents, were struck.

The most conventional way to collect the war-era “Jeffs” is as either as part of a larger Jefferson nickel collection spanning from 1938 to the current date or as a separate subtype set. Many coin dealers sell 11-coin war nickel sets, and these short sets have been very popular

among coin collectors for generations. An 11-piece circulated set commonly retails for less than $20 to $25, while uncirculated sets with specimens ranging from MS-63 to MS-65 may fetch closer to $150 to $200.

Perhaps the most notable—and certainly most valuable—among these is the 1943-P 3/2 overdate, which in a grade of Mint State-63 lists for $325 in the CDN CPG. Another challenging variety is the 1943-P doubled die obverse, which exhibits prominent doubling in Jefferson’s eye and in areas of the obverse inscriptions; it lists for $260 in the CPG. A third die variety, the 1945-P doubled die reverse, shows significant doubling in the “MONTICELLO” and “CENTS” and is listed for $155 in the CPG.

Registry set collecting has also grown in popularity in recent years, and this has brought more attention than ever to Jefferson nickels with “Full Steps” (FS) details and all higher-end Jefferson silver five-cent coins grading MS-66 or better. Some of these pieces easily register in five-figure pricing territory due to their extreme scarcity in the higher grades with FS detail.

While there are several $10,000-plus war nickels on the market, many of the top-grading silver five-cent coins can be bought for a relatively more affordable price. Among the priciest of these is the 1943-P 3/2 overdate, known by PCGS to have only eight survivors grading MS-67 with Full Steps. Two examples have been sold by Heritage since summer 2016, with their final bids ranging between $4,100 and $4,500.

The 1943-P, boasting the highest mintage (271,165,000) among all wartime five-cent silver issues, is among the more expensive of the supergrade survivors. Only four PCGS-graded specimens are known in MS-68, with just two of these carrying FS details. None of these pieces have been reported at auction in recent years, thus the PCGS price estimates of $1,900 and $14,000 (FS) are largely educated estimates on their value.

Among the lowest prices for top-tier FS examples are found among the first-year issues. PCGS reports 74 known examples of the 1942-P in the top grade of MS-67 FS, and these have sold for $400 to $500 in recent auction events. Similarly priced are 1942-S specimens, with 45 known PCGS-graded pieces generally selling for $400 to $500.

The year 1942 also marked the production of the only proof war nickels, which were made at the Philadelphia Mint. They generally grade Proof-64 or better, but cameos (CAM) are rare and deep cameos (DCAM) are extremely rare. Only one PCGS-certified DCAM specimen is known, and it sold for $5,405 at a Heritage Auction sale in January 2017. One of two reported PCGS Proof-67 CAMs sold for $14,100 at a 2014 Heritage event.

Countless analysts have deemed Jefferson nickels as a “sleeper” series. But that’s where opportunities lay for coin dealers and hobbyists who want to jump into war nickels.

This dynamic subtype offers something for virtually everybody. While bank roll searchers can—and certainly do—still find circulated examples for face value, those who are willing to pay more than five cents per coin are certain to find some good deals out there.

Cherrypickers should scout circulated and uncirculated rolls for known varieties as well as potential new ones that may not have yet been officially attributed. Meanwhile, supergrades boast low populations and are remarkably challenging, yet may not have realized their full price potential if interest in the series heats up. Examples boasting Full Steps are scarcer than many people may realize, and these are the very pieces registry set builders and other collectors will be snapping up should more people jump on the war nickel bandwagon.

Even those who stick to buying circulated examples or run-of-the-mill uncirculated specimens grading MS-60 to MS-65 can do well now as prices remain affordable with silver bullion levels under $20 per ounce. With prices still relatively affordable during the 75th anniversary of the war nickel, now is an excellent time to give these patriotic World War II-era collectibles a second look.