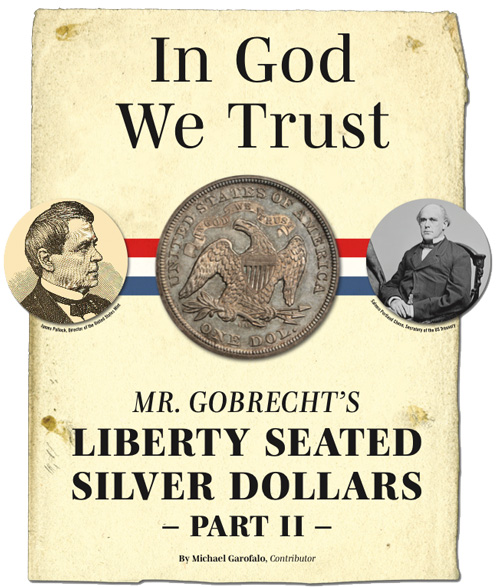 AS YOU MIGHT KNOW, the Coinage Act of 1792 established the United States Mint and provided for a national coinage. The Act stated that the coins should bear “the proper devices and inscriptions” as well as the symbols represented on our coinage. On our earliest coins, the words “LIBERTY,” “UNITED STATES OF AMERICA,” the date, and, on the copper coins, the denomination were to be inscribed. A depiction of Liberty was to be included as well. On the gold and silver coins an eagle was to be represented.

In 1837, Congress amended the 1792 Act, and established duties of various Mint officials, weight tolerances acceptable to coinage, reduced the silver weight of coins, defined the amounts of bullion that could be exchanged and included other pertinent regulations. So, between 1840 and 1865, the Liberty Seated Silver Dollar was struck without any major changes to the design of the coins.

“No nation can be strong except in the strength of God, or safe except in His defense. The trust of our people in God should be declared on our national coins. You will cause a device to be prepared without unnecessary delay with a motto expressing in the fewest and tersest words possible this national recognition.”

Director Pollock wrote back to Secretary Chase less than a month later and submitted proposed designs for new one-cent, two-cents, and three-cent coins. Pollock also proposed that “OUR COUNTRY; OUR GOD or GOD, OUR TRUST,” should be added as a motto on the coins. Secretary Chase suggested that the motto on the Two Cent Piece should simply state: “IN GOD WE TRUST.” That motto first appeared on the inaugural 1864 Two Cent piece. 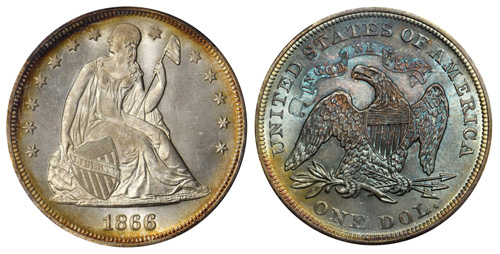 All silver dollars dated 1866 and later bore the addition of this “IN GOD WE TRUST” motto. However, there are two known examples of 1866-dated Liberty Seated Silver Dollar coins, without this motto added on the reverse.

The 1866 No Motto coins were at first considered to be transitional patterns, but today they are sometimes considered to be restrikes. According to Heritage Auctions, who sold one of the two known specimens in 2021 for $1,050,000:

“Davis retained his set of 1866 No Motto silver coins until his death in 1888. The set was split up after his death, with the dollar going to Virgil Brand, via John W. Haseltine and the Chapman brothers, while the quarter and half dollar were sold in the Robert Coulton Davis Collection by the New York Coin & Stamp firm in 1890. The Davis dollar was a highlight of several important collections before it was reunited with the quarter and half dollar in the famous duPont Collection in the 1960s. All three coins were stolen, along with the rest of duPont's collection in 1967, but they were later recovered. All three No Motto coins were donated to the National Numismatic Collection at the Smithsonian Institution in 2014.”

Heritage sold the other specimen which they believe belonged to Chief Coiner Loudon Snowden. He owned numerous “pattern coins” that he may have struck for himself or were struck by others for him, during his tenure at the Mint. He owned quite a few rarities that were not even in the National Collection. These two 1866-dated Liberty Seated Dollars are indeed rarities and virtually impossible to own, but any treatment of this Liberty Seated Dollar series must include information about them and their questionable history.

In 1866, the Mint began striking these coins with the new motto “IN GOD WE TRUST” on the reverse. Between 1866 and 1870, the Mint struck tens of thousands to hundreds of thousands of these coins annually. Many were still being shipped to China where the value of the silver content exceeded the face value. In 1870 the Philadelphia Mint struck 415,000 coins, while the Carson City Mint opened in January of that year and in February the first “CC” coins came off of the presses.

11,758 1870-dated Carson City Liberty Seated dollars came tumbling off of Press Number 1 at the Mint facility there. That press was steam powered and was capable of striking up to 100 coins per minute. The need for a silver minting facility in the West and for silver coinage was spurred on by the discovery of silver at the Comstock Lode.

But the 1870-dated Carson City coins were not the only scarce coins that year. There was also an 1870-dated coin that was struck at the San Francisco Mint as well. But there are only nine confirmed examples of this rarity and as many as three additional specimens have been reported but are not confirmed. An Extremely Fine-40 example was sold back in 2010 for over $600,000 while the James A.Stack specimen sold for over $1,000,000 in 2003. This 1870-S coin ranks in actual rarity with the great rarities of U.S. coins, including the 1894-S Barber dime and the 1933 $20 gold double eagle. There is no actual mintage figure stated in U.S. Mint records for the 1870-S Liberty Seated silver dollar. Some numismatic writers have hypothesized that these few existing coins were intended to be given as souvenirs to dignitaries during the laying of the cornerstone for the second San Francisco Mint—also known as the ‘Granite Lady,’ which was laid on May 26, 1870. They could also have been intended to be included in the cornerstone as sort of a time capsule of coinage struck as the building was being constructed.

The Philadelphia Mint broke minting records for Liberty Seated dollars by striking 1,073,800 coins in 1871 and 1,105,500 coins in 1872. Neither before those dates, nor after, would mintages exceed one million coins.

The branch mints had an interesting history striking these coins as well. The Carson City Mint additionally struck coins in 1871, 1872, and in 1873, but the mintages were 1,376 coins, 3,150 coins and 2,300 coins respectively. So, in reality, all Carson City examples are scarce. The San Francisco Mint struck 9,000 coins in 1872 and supposedly struck approximately 700 1873-dated coins. Although the U.S. Mint records indicate that these 700 coins were struck, none are known to exist, and none have ever appeared for auction.

What happened to the 700 1873-S dated silver dollars? Some numismatic scholars theorize that the 700 coins may have been struck in February of 1873. However, we do not know if those coins, which were likely paid out to depositors, were actually dated 1872 or 1873. If they were dated 1872, then that would explain why no 1873-dated coins have ever surfaced.

Throughout the 1870s, silver dollar coins were considered more of an international trade unit type of coin, rather than a coin commonly used in commerce in the United States. That was due in part to the fact that the weight of the silver dollar (26.73 grams) was heavier than the combination of minor coins that would make up a dollar. What little domestic usage these coins saw in the United States was primarily in the western states where silver mining issues were important to the local communities. Many of the Carson City Liberty Seated dollars, although the mintages were small, did see some commercial business use.

Additionally, the Philadelphia Mint continued to strike Proof coins during the entire lifespan of this series, and they were available to collectors. But the Liberty Seated silver dollar series came to abrupt ending in 1873, due to circumstances beyond its control. But this was not totally unexpected. As early as April of 1863, the newly appointed Mint Director James Pollock wrote that he felt that the silver dollar be eliminated. He wrote that the Liberty Seated silver dollar:

"No longer enters into our monetary system. The few pieces made are for Asiatic and other foreign trade and are not seen in circulation.” 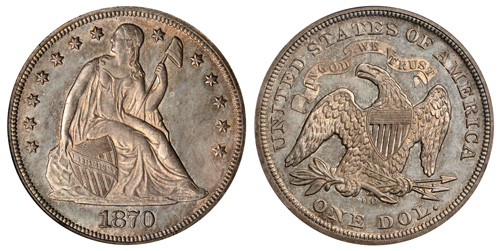 The Coinage Act of 1873 was enacted to end production of the Liberty Seated silver dollar as the overwhelming majority of these coins were being sent to Asia, where there was the greatest demand. Those citizens that advocated for silver dollar usage in the United States called the Coinage Act of 1873 the “Crime Act of ’73.” They also claimed that the bill had been rushed through Congress and few representatives had read or understood its implications. But it successfully passed both houses of Congress and was signed into law by President Grant on February 12, 1873.

In response to that Asian demand, the Coinage Act of 1873 created the Trade dollar, which was intended to be used specifically in trade with Asian countries, especially China. The Trade dollar was slightly heavier (.7874 vs 7734 of an ounce of pure silver) than its predecessor. It was primarily to be used as silver payment for trade with Chinese merchants. Although designed and manufactured for Asia, the coin did retain legal tender status within the United States in redemption amounts not to exceed $5.00. By the 1870s, the Bland-Allison Act, which made government purchases of American silver mandatory, had not yet been enacted and silver prices predictably plummeted, and the United States was flooded with these Trade dollar coins. That was never the intention for that much-maligned coin.

Thus ended the run of Mr. Gobrecht’s “Other Silver Dollars” which were the silver standard bearer from their inception in 1840 until their legislated demise in 1873.

In today’s collecting terms, completing a set of Liberty Seated silver dollars with Motto is virtually impossible due to the “stoppers”—1870-S, 1873-S and, for many, the 1873-CC. But an otherwise complete collection of the remaining 12 coins would be fun and somewhat challenging to complete. But it is doable. 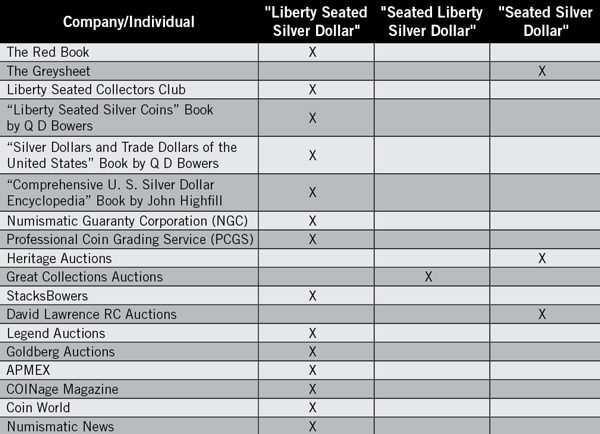 It seems that ”Liberty Seated silver dollar” is the industry-preferred term. 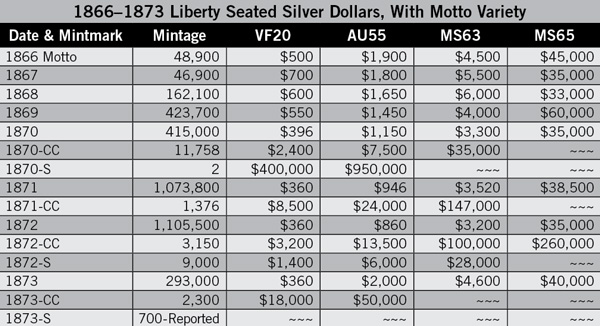 (Prices illustrated here are wholesale bids from the July 2022 Greysheet.)

Michael Garofalo has been a professional numismatist for more than 40 years. He was President of Liberty Numismatics and retired from APMEX where he was Vice President and Director of Numismatics. He is a Life Member of the American Numismatic Association and a member of the Numismatic Literary Guild.

Mike has recently published a book with CDN Publishing, titled "Secrets of the Rare Coin & Bullion Business from a Lifelong Trader." Order a copy today at www.greysheet.com.

Subscribe to August 2022 edition of Monthly Greysheet for the industry's most respected pricing and to read more articles just like this. 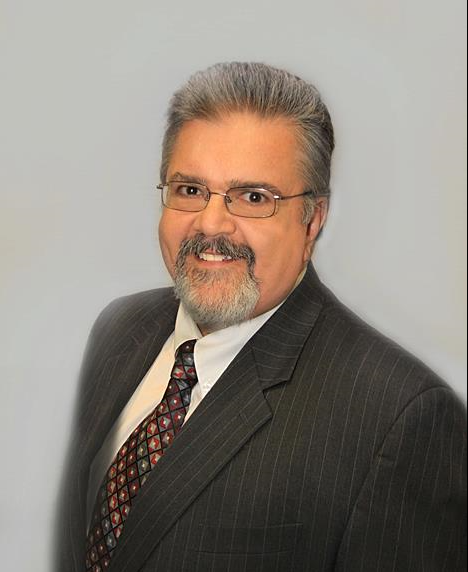