The 1894-S Barber Dime is one of the greatest rarities of American numismatics. A mere 24 were struck at the San Francisco Mint that year, and only nine are known to exist today, including two that are heavily circulated. 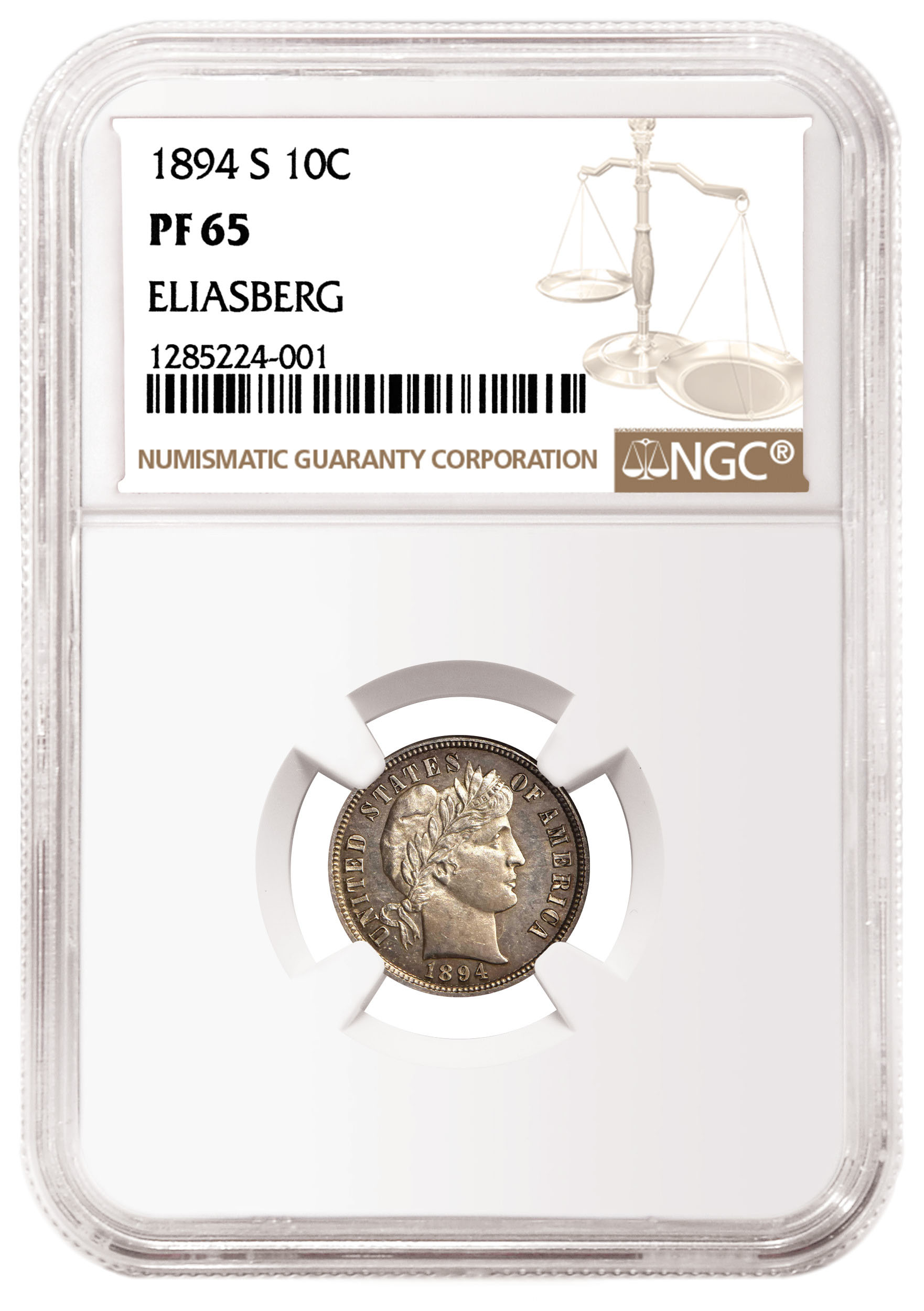 SARASOTA, Fla. (December 8, 2020) — An example of the legendary 1894-S Barber Dime, graded PF 65 by Numismatic Guaranty Corporation® (NGC®), is poised to realize a seven figure sum in a Stack’s Bowers sale of Larry H. Miller Collection rarities on December 17, 2020. Bidding for the ultra-rare dime is already at $850,000 more than a week before the auction ends.

The 1894-S Barber Dime is one of the greatest rarities of American numismatics. A mere 24 were struck at the San Francisco Mint that year, and only nine are known to exist today, including two that are heavily circulated. The NGC PF 65 example in this auction is pedigreed to Eliasberg and is just one point shy of tying for the status of finest graded.

Various explanations have been offered as to why so few were minted. Some believe the San Francisco Mint struck the dimes for assay purposes, anticipating an order for a large number of dimes that never was placed, due to an economic downturn. Other theories are that they were either struck for a bullion account that was 40 cents short of an even-dollar number (which could be achieved by striking 24 dimes — or any other number of them ending in 4); or that they were created using a small amount of silver left over from damaged or obsolete US coins that had been melted down.

The most famous lore surrounding the dime is known as the “ice cream story,” which holds that a high-ranking San Francisco Mint official struck them for banker friends and gave three to his daughter, Hallie Daggett, instructing her to set them aside for years. Supposedly, unaware of their numismatic value, the child quickly spent one of them on a dish of ice cream.

Whatever their origins, 1894-S Barber Dimes are cherished by the numismatic world today. The two other examples that have come to auction in the past two years have each realized over $1 million. 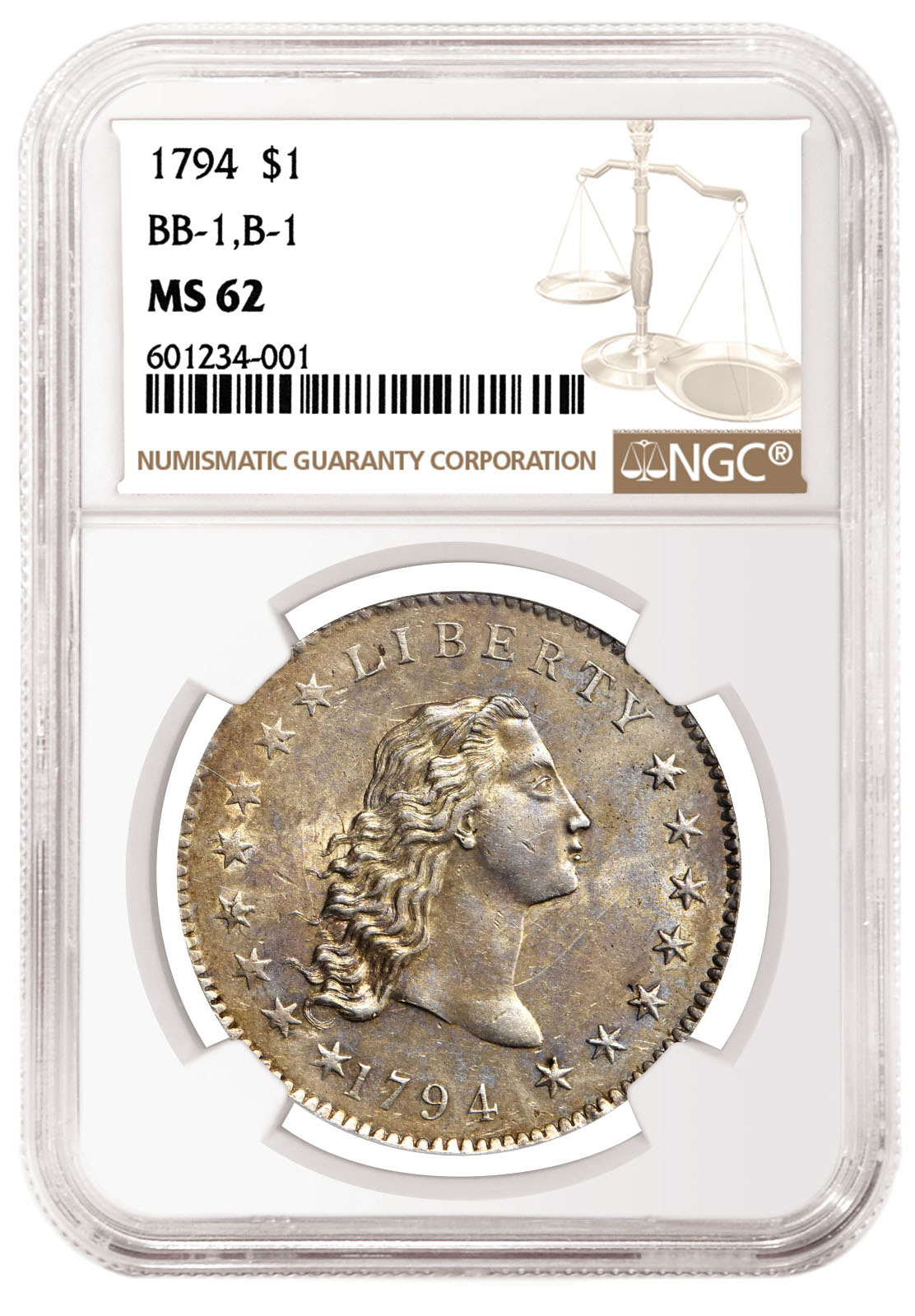 Another phenomenal NGC-certified piece in the sale is a 1794 Flowing Hair Silver Dollar graded NGC MS 62 . Bidding is already up to $440,000 more than a week before the sale ends.

This coin was part of the first silver dollars struck by the newly established US Mint. The inaugural 1794 issue had a mintage of 1,758, but only about 130 are known to survive today.

Their design demonstrates how US coinage evolved rapidly in the initial years of the Mint. For instance, the earliest dollars featured a modest eagle, which was quickly replaced with a more-impressive heraldic version.

The historical significance and rarity of the 1794 Dollar drives spirited bidding whenever one is offered at auction. Raising the stakes further, this particular example is among the highest-graded survivors. Price guides suggest this example will sell for at least $1 million.

“The Larry H. Miller Collection is an impressive collection of ultra-rarities from across American numismatics,” said Mark Salzberg, NGC Chairman and Grading Finalizer. " NGC certification of these extraordinary coins will enable them to achieve their maximum potential in this auction."